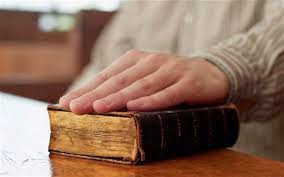 "We hope the apex court will seize this opportunity to make a clear finding on unsworn statements given from the dock. At present, there is some ambiguity," he told The Malaysian Insider during a break at the hearing today. [Read the full MI report here]

Is there really an ambiguity?

During their three allocated days, Anwar's defense was still trying to pick on the issues relating to DNA and the rest of the 42 issues for the purpose to "create doubt", as said by Ram Karpal Singh. One doubt accepted could hopefully be sufficient to reverse the decision of the Court of Appeal (COA).

However, those issues of facts are supposed to be dealt with at the High Court and Cout of Appeal. The Federal Court only deal with issues on the Point of Law i.e. the interpretation of the law [read here on Point of law or Question of Law].

Thus for Tan Sri Shafee Abdullah's comment that all have been heard before.

Though there are Point of Law issues raised, it must have been dealt before and the precedent is voluminous. That explains Shafee's subsequent comment that only 15% are new and 85% are old.  So he had to spend today to give a submission to give the right perspective to answer the 42 issues raised by defense. 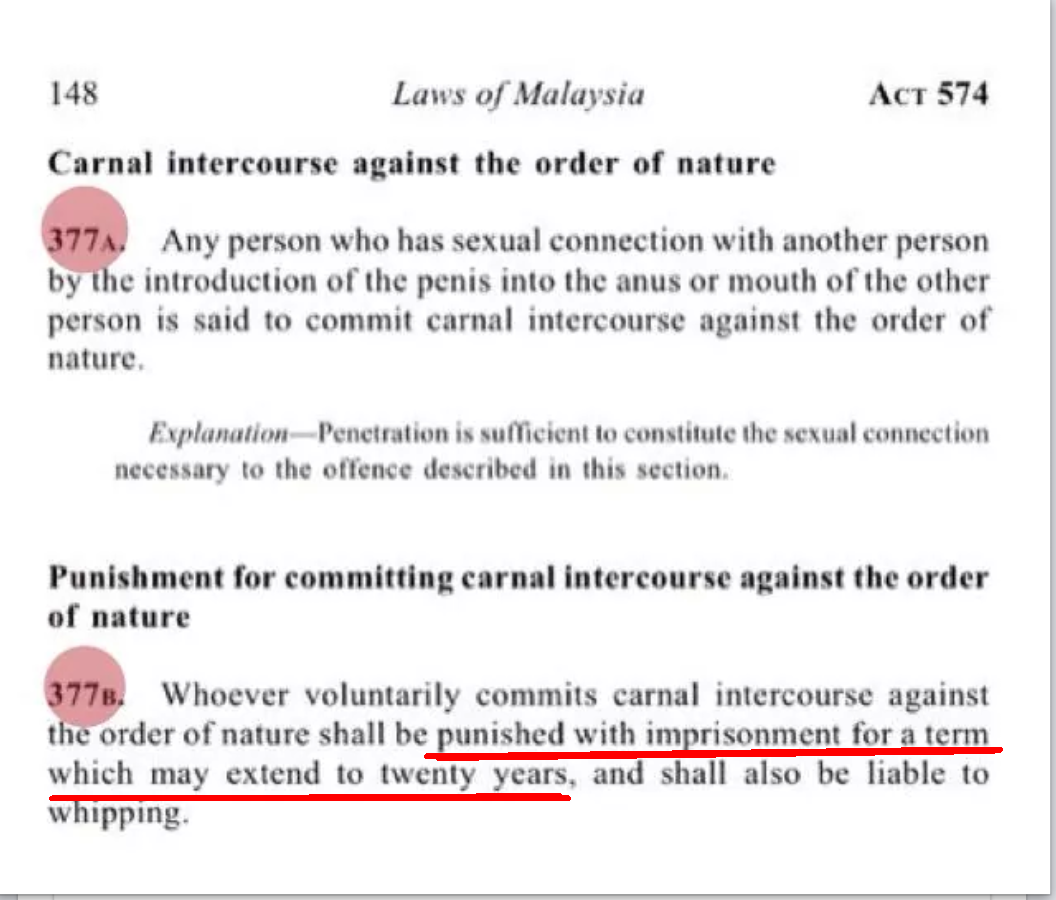 He will put new issues on Monday and Tuesday. To remind Anwar's supporters, the prosecution appealed for sentence longer than the existing 5 years. It could go up to 20 years.

Now, is the attempt by Surendran to raise a Point of Law on Anwar Ibrahim's unsworn statement from the dock filled with conspiracy accusation something new? 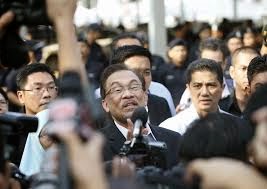 So, does unsworn statement from the dock, which are not cross examined by both sides, be accepted by the court as evidence?

Let's not play lawyer but hear what a lawyer has to say. Loyar Burok had an article written in 2011 [the link here] and extracts are taken below:


.... the right of Dato’ Seri Anwar Ibrahim, being an accused, to make a statement from the dock is not provided in anywhere in our Criminal Procedure Code or the Evidence Act. Rather, this is a common law right which originates from the English criminal law in the late 19th century, and which is now integrated as part of our criminal law.

As I stand to be corrected, this right is rarely exercised by any accused and thus there are few case law I can refer to. One of the earliest cases in Malaysia where an accused exercised his right to make an unsworn statement from the dock is that of Ip Ying Wah v Public Prosecutor [1958] MLJ 34. In the Ip Ying Wah case, Buhagiar J who heard the case held that when an accused makes a statement from the dock, he is not liable to any cross-examination by the prosecution team. Therefore, when an accused exercise this right, not only that he need not swear and give evidence under oath, he too will not be subjected to any cross-examination by the prosecution; a stage at which usually the credibility of any witness and/ or any contradiction in the testimony of the witness will be revealed.

Given the fact that the accused need not testify under oath and will not be cross-examined, should the statement of the accused then be admitted as evidence by the courts of justice?

In the case of Wong Heng Fatt, at p. 21, Smith J who heard the case held as follows:


“I do not consider that a statement by an accused from the dock is evidence in view of the provision of s4(1)(a) of the Oaths and Affirmations Ordinance 1949 the essential part of which reads “… oaths shall be taken by witnesses, that is to say, all persons who… give evidence… before the court…”. Since the appellant was not sworn or affirmed he did not give evidence.” (my emphasis added)


“(1) Subject to section 7, oaths shall be taken by the following persons –

(a) witnesses, that is to say, all persons who may be lawfully examined, or give or be required to give evidence, by or before any court or person having, as mentioned in section 4, authority to examine such person or to receive evidence.”

Then in the case of Ng Hoi Cheu & Anor v Public Prosecutor [1968] 1 MLJ 53, Chang Min Tat J (as his Lordship then was) disagreed with the view of Smith J relying on Section 3 of the Evidence Act 1950 which defines “evidence” as, inter alia, “all statements which the court permits or requires to be made before it by witnesses in relation to matter of fact under inquiry: such statements are called oral evidence…”.

It also pertinent to note at this point that the English Court of Appeal had in the case of Shankley v Hodgson [1962] Crim. LR 248 held that an unsworn statement from the dock is NOT evidence and the view of the English Court of Appeal and Smith J has been followed in Malaysia by Hishamudin Yunus J (now JCA) in the case of Public Prosecutor v Shariff Kadir [1997] 5 CLJ 463. 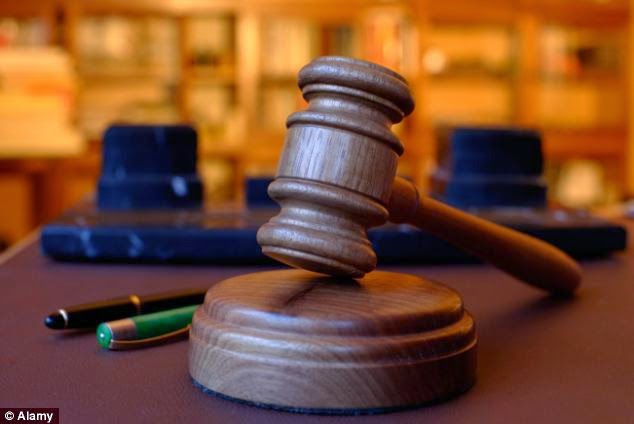 
On the basis that an unsworn statement by an accused from the dock is not evidence, what weight should a trial judge attach to such statement?

In the Shariff Kadir case, at pp. 469-470, Hismamuddin Yunus J (as his Lordship then was) held as follows:


“since, as a matter of law, an accused cannot be cross-examined on his unsworn statement made from the dock, such a statement cannot carry the same weight as evidence given in the witness-box under oath…

[T]he weight that should be given to such a statement must be such weight as the judge thinks fit.”

Given the little weight to be attached to an unsworn statement by the accused from the dock, if any, vis-à-vis a statement from a witness under oath, it is no surprise why the English Criminal Law Revision Committee recommended that “nowadays the accused, if he gives evidence, should do so in the same way as other witnesses and be subject to cross-examination”. As such, the Westminster Parliament has abolished the right of an accused to make unsworn statement from the dock vide Section 72 of the English Criminal Justice Act 1982.

Following from that, judges in Malaysia too have called for the abolition of this archaic right (since the right has been in existence in England since late 19th century) including Hishamudin Yunus JCA in the Shariff Kadir case. 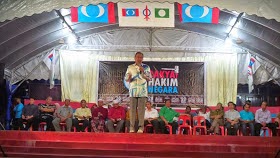 The article see it as another Anwar Ibrahim's political game:


As a senior politician with a defence team comprising of the best and experienced criminal lawyers like Karpal Singh, I am surprised why Dato’ Seri Anwar Ibrahim chose to exercise his right to make unsworn statement from the dock where such statement should not (NOT that it will not) carry as much weight as, amongst others, Saiful’s (the alleged victim) statement. In order to persuade and convince the Learned Trial Judge to hold in his favour and acquit him, in particular in a trial which is deemed by the Opposition leaders to be a persecution rather than a prosecution,  why didn’t Dato’ Seri Anwar Ibrahim make a sworn statement which will, at least theoretically, carry more weight?

In the alternative, is this yet another move on the political chessboard? Is this a politically motivated move that will leave an avenue for the Opposition Leader to attack the judiciary as being biased should he be convicted? I do not know and I cannot say for certain. But one has to look at his statement from the dock.

Those following the case in the Federal Court would have been disappointed with leading counsel and ex-Federal Court judge, Dato Seri Gopal Sri Ram's easily debunked submission. 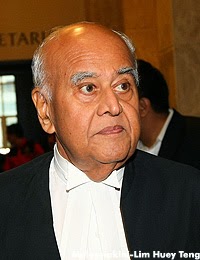 Essentially, all the days of arguments to raise doubts on DNA sample and KY Jelly stain; credibility of Saiful, Investigating Officer and Government Chemist; and Court of Appeal comes to none. Anwar Ibrahim had not denied sodomising Saiful Bohari under oath.

Sri Ram may have joined the defense team for a reason or two. There is the believe that he has influence over his former colleagues. That may have contributed to  the hue and cry against Bar Council for their silence on Gopal's return as counsel. [Read MI here]

Many speculated that the strategy to create and raise the so-called 42 issues is for political deployment.

This case attracted support from the opposition (obviously), foreign government and NGOs coupled with the interest by 84 countries in the world supporting Sexual Orientation and Gender Identity (SOGI) rights [read in Amnesty International here ] i.e. LGBT as part of Human Rights.

On the other hand, there is room for religous rights as made at the Cairo Declaration on Human Rights in Islam (1990) [read here].

Interestingly, the article ended with this statement:


And let us not kid ourselves, whilst our judicial system and us do not judge by oaths or swearing, any faithful follower of any religion will fear to swear in the name of God unless he/ she is telling the truth. The man has previously refused to swear in a mosque and the same man is now refusing to swear in the Courts of Justice. Are we not going to ask ourselves why? Perhaps, the fear of God?

The judges could give a little weight to his denial out of domestic and foreign political pressure. Furthermore, he did plead not guilty.

However, the judges could hardly give much weight to the issues he raised which was not cross examined. It does not take a Shafee to debunked his conspiracy theories. Thus, it could imply his denial are faulty or merely as "bare denial".

Thank you Admin for the most clear explanation I have read so far for unsworn statement in this case.

Clear and concise article that enlightens ordinary citizens. No amount of polemics could make a wrong a right......Thank you mr admin. I believe beyond reasonable doubts that anwar is guilty as per charged.

Anwar did not took the stand because he fears the truth and his bad side will bare open.

He had planned to put up 6 alibis which include Prof Arif MIER, Omar Merican, and kondo owner BUT he pulled back. Why did he pulled back?

Still fear of more will come out. Believe defense has other witnesses to expose more of anwar.

Then his action to run off to the Turkish Embassis, delay daly to pressent himself to the police and refusal to cooperate to give his DNA sample voluntarily.

All this tells us he is guilty. It means he is immoral, compulsive liar, and slanderer.

Someone so obsess with power that he is willing to practise corruption - financially and meantally on the public - and willing to sell the country to the enemy.

DNA:Arguing the credibility of the DNA sample is a waste of the court's time.
Sensible approach would be for a court order to compel Anwar to give his DNA sample during this trial to compare with the procecution sample.

So glad Jokowi REFUSED to get involved. Great President.

Bloody good article mate. The best eduction for me today.