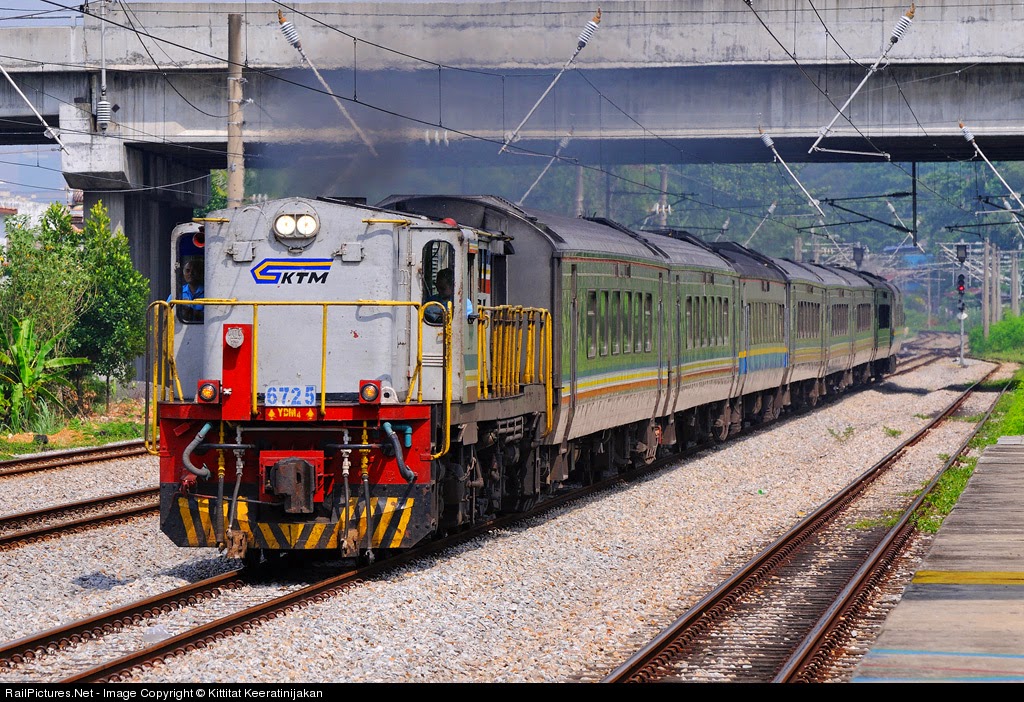 The KTM issue came about when Ahmad Maslan was responding to a question on KTM's accumulated RM2.5 billion loss by Dr Lee Boon Hye (PKR-Gopeng).

As advised accordingly, Ahmad Maslan attributed the loss in his answer to low fare and high maintenance. Obviously, part of the suggested solution is increasing fare.

The typical neo-liberal Pemandu thinking textbook solution can be seen as the term "rationalisation" creeps into Ahmad Maslan answer. It will mean the predictable cutting down on schedule, workforce, sell-off, etc. like how MAS was butchered by Khazanah.

And they predictably did it as so. [Read the Star coverage here.]

Ahmad Maslan maybe a favourite subject of ridicule but no poking fun at him on this, please. Dato Najib too said the same thing. [Read TMI here.]

Maybe the Deputy Minister and Minister lack the ground experience and business knowledge that passenger is not the real income for KTM. It's nature of business is in land transport of human and cargo.

The business turnaround and development has to be done by KTM management. But, typical of  how things are these days, the thinking is done by some theoreticians consultants outside the organisation and most likely outfit like Khazanah and Pemandu.

There are two ways of going about and that is to cut cost and face up with a public already agitated by rising cost anger [Read Rakyat post here] or look for opportunities within the business to increase revenue.

If there is none, then look at related diversification but do not talk of advertising business in Parliamanet. That's peanut meant for monkeys.

Yet the neo-liberal consultants in KTMB Transformation Lab advised the Deputy Minister to mention of advertising. Aren't neo-liberal consultants allergic to diversification, related or unrelated? Thus it is puzzling why Pemandu aren't they thinking of privatisation since it could take the kinks out of the government subsidy bill?

Yes, government will not privatise KTM ... for now. [Read in The Star here.]

If  there is anything to be learned from this, it is for government and country to stop with this economic ideological bullshit which comes with predictable textbook answers without putting in much effort to think.

Highlighting Tun M's suggestion is not about trying to champion NEP although it is similar to the idea of increasing the pie rather take from someone else. More so for a man not adhering by any economic school of thoughts, although there are those that described him as close to a Keynesian.

The point is to not be too Idris Jala-like by automatically think of slashing or a fancy way of saying, rationalise whenever one is faced with a problem. It shows a tendency for textbook solution to complex problems.

Tum M maybe no match for the heard to be privatised Pemandu consultants but the manner they do things shows they could be either inexperienced and lack the practical problem solving skill. Maybe they do not do proper research and work since Pemandu tend to hide behind a public lab to justify their inadequacies.

I hope they stop this neo-liberal nonsense.

Neo-liberalism has created misery the world over.

The evidence is all out there but have our leaders learned.

Unfortunately, we do not have people like Dr. M. running Malaysia.

Double tracking based on British Gauge, the UK has already changed to standard Gauge (1.3 meters) was the mother of all mistakes. When we buy rolling stock we have to pay extra for modifications the undercarriage on those carriages built for 1.3 meters. Unless we have already arranged for a Malaysian Company to build them for us. Please let the public know

Idris jala mind set is an accountant, losses look at figures and do slashes or hide it to pretend losses. Just like MAS. Problems with Government link entities is the corporate figures are not running like an industrialist, they are not thinking about managing business. Their thinking is about running as big boss to a very large human organisation. That is why they blame the lower level workers. Not managing to be in the industry. And worst the champion is always call turn around manager. What an utter bullshitter.

"Actually, all it takes is common sense, some thinking and ingenuity. The problem is it may not be so common these days."

Amen to that, brother!

When Najib did this as PM for the rakyat, the government is already start saving consultancy fee which can be chanelled for other positive related measures.

Why the need to waste rakyat's money to consultants that in the end waste more money?

Valid point but why didn't Idris Jala lab recommend that.

Instead of EPF , Tabung Haji and Felda invest in properties abroad, isn't this more strategic and relevent for the country?

Is the Government promoting the HS Train instead of turning around KTMB after billions of tax payers money have been spent for the double tracking.

Govt shd be serious in the turnaround of KTM or they might as well not waste time and just close up ktm n go high speed.

Dont waste public money and procrastinate in the winding down of ktm. We already lost Tanjung Pagar to Sporean, at least part of it.

If no plan to liquidate, then be serious in turning around ktm.

Off the cuff, I liked the one liner giving peanuts you get monkey thing.....

That's a darn good jab to the intended.

Given a choice I'd bring a sledgehammer to rubble-down those advisors, serious!