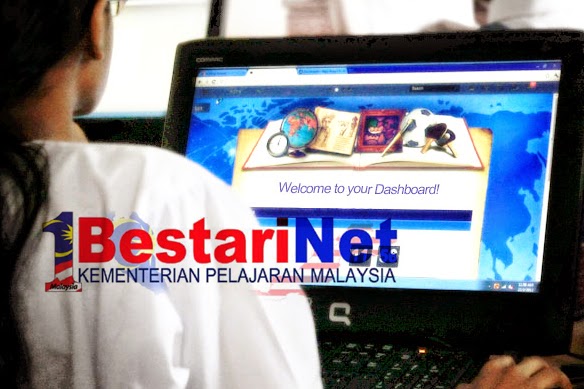 That looks like the ideal picture of 1Bestarinet working in schools. In reality, the crony capitalist YTL constructed system for school does not deliver.

There will be those who think that we are exeggerating and it is not as bad as what have been written on the Internet. Some bureaucrats or politicians will make the cliche claim that the school teachers are happy and it is operating well but the common glich do happen. Those complaining are opposition supporters teachers.

It is not convincing enough. Our sister in law is a teacher in the city limit of Johor Baru, She voted for BN and complained incessantly about 1Bestarinet in family gatherings. Teachers had to use nearby Internet cafe to get their work done at their own expense.

Her two children laugh off 1Bestarinet as 1Bodohnet and at an early young age, they already built up the impression that YTL is a useless crony corporation.

Many posting have been made in the past on 1Bestarinet [read back since 2012 here, here, here, here, here, and here] so there is no need to repeat about how crony capitalist YTL won the contract at RM4 billion despite Telekom and few other bidders came in at significantly under RM3 billion.

It finally came in the form of MP for Pulai, Dato Nurjazlan Mohamed that it is openly known what had been long known by teachers that crony capitalist YTL who speaks so much about competency and being competitive in the market did not deliver.

PAC: 1BestariNet project should be scrapped

KUALA LUMPUR: The Public Accounts Commitee said that the Education Ministry should cancel the RM4.1bil 1Bestarinet project in schools nationwide as the first phase of the project was poorly delivered.

PAC chairman Datuk Nur Jazlan Mohamed said the first phase of the project, although completed at the cost RM633mil, did not yield the expected results.

"In our opinion, it is still incomplete because it did not deliver the service it was supposed to," he told reporters after chairing a PAC meeting here in Parliament, Tuesday.

However, he said the decision whether or not to proceed with the project, which was awarded to YTL Communications Sdn Bhd via an open tender, lies with the Ministry.

"At the end of the day, the implementation of the first phase was poor and it shouldn't be continued. But it is up to the Ministry because they are the people in charge," he said.

Nur Jazlan, who is also Pulai MP, said that the project, which was aimed at providing high-speed 4G broadband across all 10,000 schools in the country, did not meet its target.

"The school children, teachers and parents still cannot access the system," he said.

However, he said Madinah was only appointed to her position in 2013, two years after the project was initiated.

"We wanted to know what she is going to do in the future. But according to her, the project will continue," he said.

He said PAC hopes to complete the investigation by next month.

The 1Bestarinet project, which was expected to be completed over 15 years in three phases, came to the spotlight when the Auditor-General's Report 2013 showed irregularities regarding its execution. 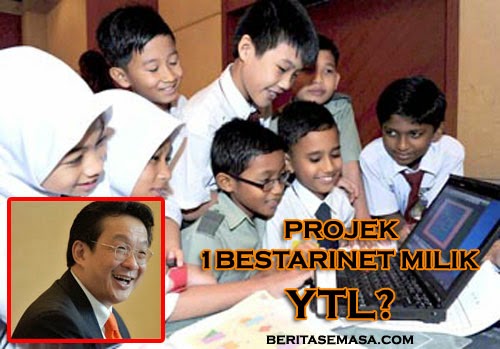 In November 2014, crony capitalist YTL was fined RM2.4 million by Ministry of Education for failing to provide the 10,000 schools with the e-learning project [read MI here]. More in The Star here.

For voicing the grievances of teachers throughout the country, Nurjazlan must be appreciated. Credit where is due.

As Director of Telekom Malaysia (or is it former Director?) and used to chair the Tender and Procurement Committee, he has the credibility to talk on the subject matter of telecommunication and the e-learning project. And he is an ANSARA from Kulim.

So hope those claiming also to be taxpayers should stop bitching about Tan Sri Syed Mokhtar, because their idolised crony capitalist corporate player, that is often defended in the media by Tony Pua of DAP and Rafizi Ramli of PKR, failed miserably.

It poses the question off whether he is really that great.

Sources from telco players said they had the benefit of a "cooperating" Chinese government officer inside the Ministry to supply the information to them. It is in the same manner that YTL got induced leaked info on the first IPP.

Nothing racial, the dude is really Chinese and if the person has straight hair, it would have been mentioned. The name to be withheld for a latter day convenience.

So this is defamatory? Tell that to the teachers who are pissed as hell with the limited 4.0 MB line for a whole school. Go ahead sue us, what do we care about crooked and corrupt businessmen? God will grant us heaven for getting sued by crooks.
at 3/18/2015 03:52:00 PM

Ladies & Gentlemen, The Government should take back all the monopolies given to this clown.

They construct the telecomunication towers in school compound for free.

Those towers are also utilized by other YTL's customers nearby.

The Education Ministry should charge some rentals from YTL.

Are you a technical expert on 4G/LTE, 5G and high-speed broadband to be able to offer an informed view on this subject?

Who drew up the specs for this project? Were tech experts from MCMC or specialist external consultants involved? Did they evaluate all the tender responses and come up with a recommendation based on technical grounds?

If the Education Ministry is the user of the system, did it put it's own qualified project managers to oversee the project implementation from day 1?

Or is the Ministry ducking responsibility by shoving off blame on to YTL?

Why didn't the Ministry go and study how Singapore's MOE (Ministry of Education) implemented Internet coverage for schools in Singapore?

So, don't be so quick to point fingers and look for scapegoats!

This is selective blame game, yea sure YTL screwed up, big time!!! no objection there at all... but only part of the story, bro...

you cant escape the fact that somebody drew up the tender, the requirement, the spec,.. the bloody objective... that somebody is the gomen.

you put a request that is garbage in nature... what do you expect the outcome will be? you think TM or anybody else is going to be brilliant? the spec says garbage in, then it will be garbage out - maybe the cost maybe cheaper but it is garbage never the less.

lets be honest, gomen is promoting incompetence at all level. why is that so? and more importantly why is it getting worse? and dont be racist or anything like that - i am a malay and it takes one to know one.

look at that picture.. tell me whats wrong with it? the ones with all those kids looking at a laptop? yes, that right - 1 PC to share with all.. what happened to all those PC lab tendered out so that all school got one? well, i've got school going children and let me tell you... it is almost non existence.. my kids are learning about/using PC from books.. WTF?

but here is the thing that riles me up so much... nobody (except the opposition bcoz its their job?) dares to question - who open the door for YTL and its ilk in the first place? damn right, its from the BN side, the gov of the day - yea keep it up, and one fine day - the gov of the day can become gov of yesterday.

At least, Singapore tries to get it right.

And don't flog that tired excuse that Singapore is different because it is a compact city-state.

Aren't KL/PJ/Klang Valley,Johor Bahru/Iskandar, Penang and Malacca equally "compact"? Aren't they on par with Singapore in terms of infrastructure? In terms of telecom capabilities and Internet coverage?

So, what have our main telcos being doing about high-speed Internet coverage? Yeah - telcos like Celcom/Axiata, Digi and Maxis? Where is the MCMC in all this?

All I hear is excuses that we can't compete with Singapore because we are "special".

Wah now you blame it on the specs pulak oppo supporter? And the solution is to turn to the future government ie the pakatan rakyat? Which failed to deliver even the most basic service such as trash, roadworks and public health like in selangor? You put hope on these people to even manage complex business such as telecommunication? You clearly are pathetic.

True that. Hopefully ytl would shun away from entering any government contract and only participate on what singapore gov offers. Since FY so adore the meritocrasy there.

Does Axiata provide these types of speeds to it's Internet customers in Malaysia?

Does any telco in Malaysia even provide a 1Gbps fibre broadband service?

If M1 can do it in Singapore, why can't Axiata do the same in Malaysia?

And what about Singapore telco Singtel advertising it's 4G service as being to offer speeds of 150Mbps and 300Mbps?

Can any Malaysian telco offer this type of 4G network speed consistently and without service interruptions?

The difference is that in Singapore, there is a regulator (Infocomm Development Authority or IDA) that is on the ball and perfectly willing to crack the whip at Singapore telcos if they underperform.

What is the Malaysian telco regulator doing?

Where is the nationwide coverage for 4G/LTE and 4G+? In West Malaysia? In Sabah and Sarawak?

Where is the nationwide coverage for high-speed fibre broadband that can offer speeds of up to 1Gbps?

Wah, lau...so you are another telecom expert, izzit?

Do you even know what is meant by "project specs"?

This is not abt project spec ..it is about breaking even for a profit... have u been living in a jungle all this while?

Integration of IT on a national scale takes years and In the many countries who tried before Malaysia - such as the UK and USA - it has taken up to a decade to effectively integrate IT into the classroom and teaching practise. They also had their share of connectivity issues. You are being unrealistic if you expect overnight success. At least the government is trying with 1BestariNet. to put Malaysia ahead of other Asian countries such as Singapore and even South Korea. It is imperative that the teachers , parents and students remain positive, proactive and patient during this transformation period otherwise projects like 1BestariNet won't succeed. How then will Malaysian - all Malaysian - students compete on a global scale?