Hudud: Stepping away from Parliamentary tradition 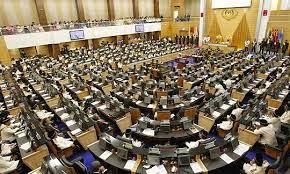 There is this hypothesis going around that UMNO supported PAS's motion to amend the 1983-passed hudud law in return to form a unity government with the ulamak faction in PAS. At least that  is how PASMA, DAP and PKR politicians are going around arguing against the new hudud law passed on March 18th.

The reactions against UMNO Kelantan's support for hudud from BN component members and possibly UMNO MPs from Sabah have been negative. PAS have submitted a private bill at parliament for a constitutional amendment to allow hudud in Kelantan and for Muslims. Some felt that was a trap for Dato Najib and UMNO.

If UMNO does not support, that the Mahfuz Omars of the world will have a field day to say they are right to accuse UMNO's hudud support was intended to split Pakatan. But if UMNO do support, they will have retribution from other BN component parties and UMNO leaders from Sabah.

It looks like a "Damn if I do damn, Damn if I don't" situation for Najib. However, blogger Life of Annie have an idea [read here]. Why not let the MPs vote without applying any instruction from the Chief Whip?

Vote out of their own view and along the aspirations of their constituent. It will be an interesting and positive break from past tradition of voting based on party line and power politicking. A political transformation at the very essence of democratic practise at a time the population is sick with excessive politicking and demanding issues be dealt with as issues per se.

If it happens, it is a start to a more mature politics. Politics that is truly in the spirit of democrasy in which Parliament is ideally where the view and position of the local constituency is translated in the voting and not based on what party headquarter tells them to do.

Party headquarters doesn't always instruct based on the rakyat's aspiration. In the first place, it is difficult to ascertain. Many a times, instructions are based on the shallow inter or even intra-party power play and cheap perception. It is not uncommon that votes are done for the selfish self-interest of party leaders.


The scene of each individual MP registering their votes for the whole country to see live on TV and Internet as everyone wait for the outcome of the votes would be something to cherish than the simplistic call to say "Aye!" and the aye have it.

The MPs have to put their stance for their constituency to judge the soundness of their decision. Wee Ka Siong and many MCA leaders represent large percentage of Malay Muslim voters. Will he vote out of his conscience or in accordance to wishes of his 65% Malay voters constituency?

Perkasa has a strong presense in Air Itam. If his voters disagree with him, they can oust him in the next general election. That will mean one less seat for BN i.e. MCA and they would have no choice but send the party Deputy President to the DAP slaughterhouse in Bukit Bintang or Gelang Patah.

The big complain against Wee is that he hardly return to Air Itam to meet his constituents and at one time, spent more time with MCA Johor Baru .

Every election campaigners claim their candidate will translate the wishes of the people in the highest body of government. After the vote was delivered, their views are not sought after before a decision is made. Typically, it will be a Majlis Penerangan to explain or pacify the voters.


This issue of hudud have been politicise for too damn long that it is too complex.

PAS is in the midst of a bitter party election with the liberals Anwarinas making their move to oust Hadi Awang and ulamak faction.

Unless it is a bluff, Hadi looks dead set to break off from DAP and PKR. The Anwarinas presumed Hadi will join up with UMNO and used the presumption as their campaign. 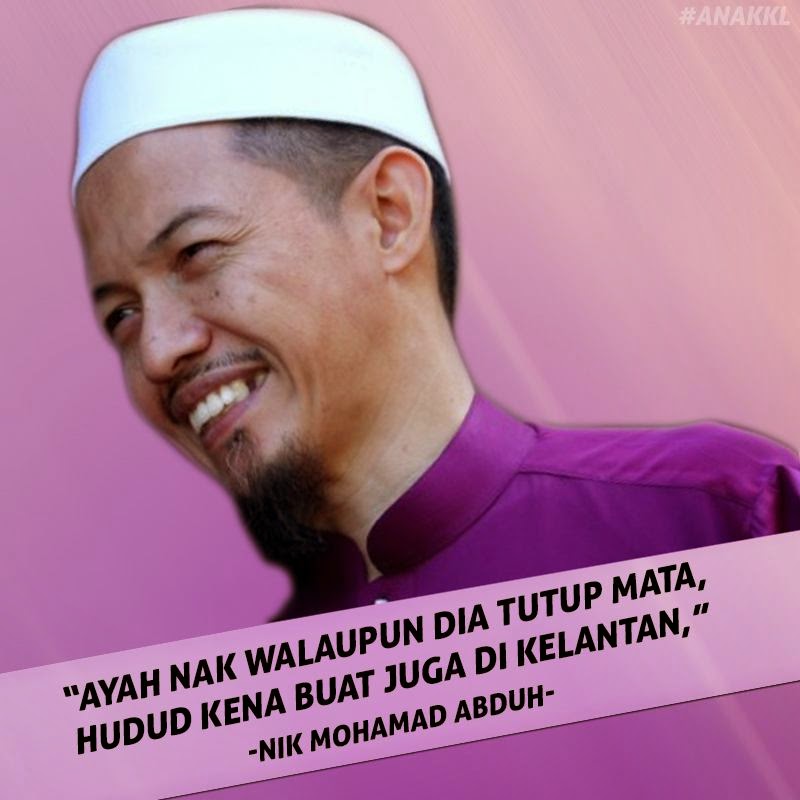 Decades of politics of hatred eschewed by the late Tok Guru Nik Aziz made it a taboo in PAS to even mention of alliance with UMNO. Fatwa by Hadi and Nik Aziz have deemed UMNO as kafir,

Ironically, PAS have been in alliance with DAP whose position is so secular that in spirit, they oppose all special position accorded to Islam in the constitution.

Except for few brainless PAS leaders like Nizar Jamaluddin, PAS members in or align to PASMA have been rather quiet on their hudud stance despite championing hudud for decades.

It goes back to post WWII Hizbul Muslimin party coming out of Gunong Semanggol Perak. The kafir mengkafir thing started that far back too. [Read in Wikipedia here.]

So does Muslim NGO like ABIM or seldom claim to mean Anwar Bin Ibrahim Malaysia that is backing PKR strongly. 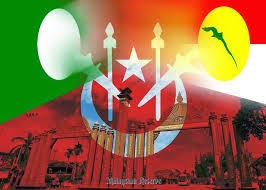 The seats that PAS usually run is against UMNO so the seat distribution will mean UMNO have to sacrifice their seats. In turn, PAS will argue that UMNO is waning in popularity and more seats allocated for them.

The idea of such unity is great but the number is not workable. The whole idea of unity government is best towards a unity in purpose like solving flood disaster, resolving state-federal issues, and common position on matters regarding Islamic and Bumiputera interest.

The argument for or against hudud is a continual polemics. Except for the deviants Sister in Sesat, literalist Wahabi and anti Hadith, and plain western thinking Muslim liberal, most Muslims accept the fact that hudud is God's law and they should not oppose it.

However, the question is whether hudud is a priority in a country in which Muslims are economically challenged and it's suitability in a multi-racial and multi-religious society like Malaysia.

The political, legal and academic question that arise and seldom raised by Tun Dr Mahathir in the past will the subsequent question of serving justice.

Muslims could argue that it applies to Muslims only but the question is more complicated when Muslims are charged under different law for the same offense committed by non Muslims. Will Muslims be given options to pick between civil law and syariah hudud law?

But the bigger question lies in the constitution that does not empower state to take charge of criminal law. That falls in the federal list in the constitution and power accorded to police. PAS hope to change to enable state JAKIM to undertake criminal investigation and charge suspects.

Will video be acceptable proof for the offense of adultery and zina with Chinadoll, Hadi? 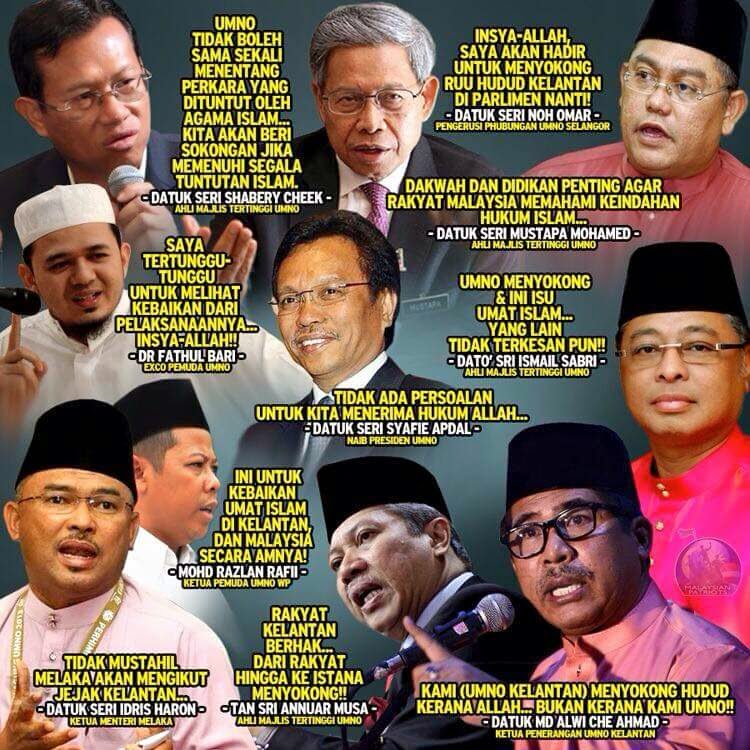 UMNO's position all these time to disagree with hudud is that it is PAS's hudud and not Islam's hudud.

This was revealed by a letter Tun Dr Mahathir had addressed to Nik Aziz in his days as Prime Minister when hudud and kafir mengkafir was hot.

Now that PAS is willing to amend the passed but never gazetted hudud law and also establish a technical committee with the authorities, UMNO Kelantan had taken the position that they cannot oppose God's law.

Another consideration is the rising consciousness amongst Muslims which tend to favour for hudud law these days. This is the result of Islamisation facade that swept through the country to counter PAS "Islamic fanaticism". It comes not a definitive description but a quote and unquote one. 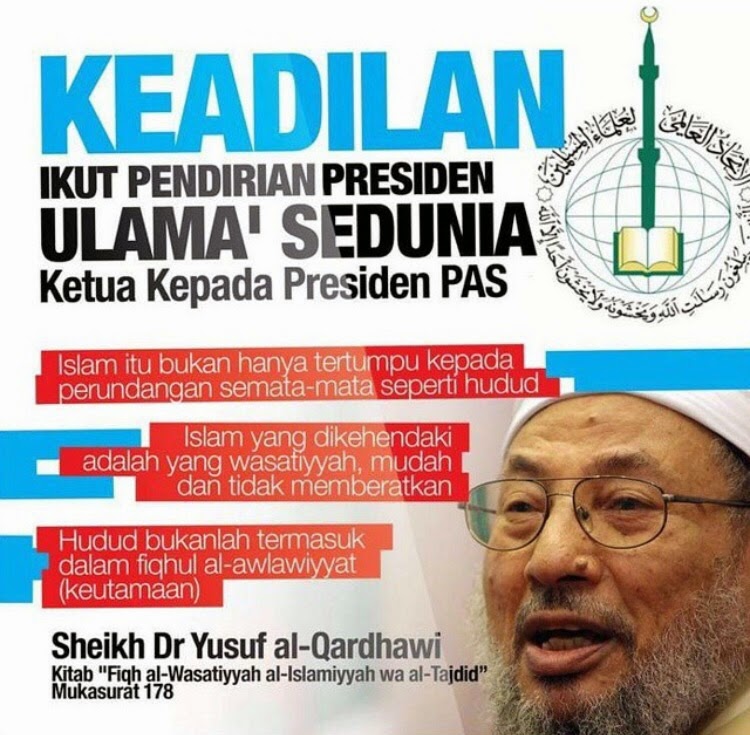 PKR have stated they will not vote for the hudud bill in Parliament. Dr Wan Azizah used UMNO's old argument along Makasid Syariah and Sheikh Yusof Qardawi's Fiqh Awlawiyyat.

But is she and her family subscribe to the position in both references with regard to preserve purity in heredity, maintain sexual intercourse to procreation and rejection of zina and LGBT?

As far as the position of MCA, Gerakan, DAP, MIC and all other non Muslims based political parties, their stance is consistent. Malaysia is a secular nation thus hudud law is not applicable, be it for Muslim only or not. 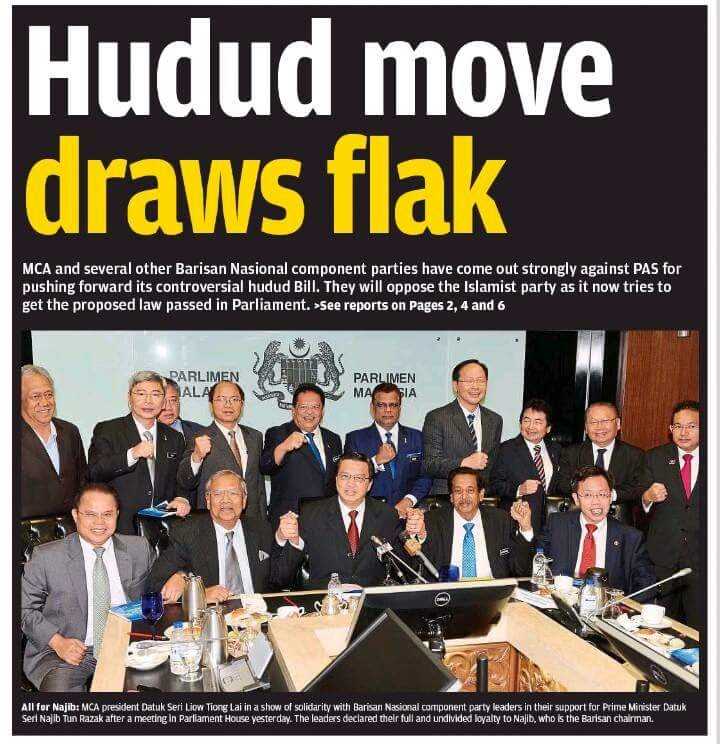 DAP's Lim Kit Siang also suggested a new coalition involving parties from Pakatan and BN. It looks as though he is inviting MCA, Gerakan and other Chinese base parties in Sabah and Sarawak.

What can be visually seen is that it will not happen.

It is a zero sum game similar to UMNO and PAS and it will only hasten MCA and Gerakan process of irrelevance to Chinese voters to their immediate  demise.

Old man Kit is anticipating more split than just PAS leaving Pakatan. He is seeing DAP and PKR being shooed out of Sabah and Sarawak. This represent the opportunity to stem that problem.

As for Najib, wonder who was the political adviser to suggest supporting PAS on hudud and pursue a UMNO-PAS collabboration.

If he is uncomfortable to break such Parliamentary tradition for fear it will lead to more political complications and lose of control in the future by the precedent set, then maybe it best to delay Parliament.

Wait out decision on Gerakan's lawsuit and act in accordance to Federal Courts interpretation. But that will take years to reach the Federal court and get a decision.
at 3/25/2015 01:15:00 PM

liberals Anwarinas ... Originally was Islamist Anwarinas and how time cahnge fromt he Abimist days to Liberalist . What a day for AI and his co-cohorts!

Does not look likely bro for PAS to win.

This considering that all PAS MP will rally behind president which there will be deviant ones like Mujahid, Hanipa Maidin,etc:

The UMNO MPs in Sabah will not vote in favour:

There is also the likes of Nazri Aziz, Nurjazlan, etc.

SO what is the point of tabling it?

It is only to test UMNO's commitment for Hudud and a legal justification to criticise UMNO should they back out.

Most likely it will not pass through Parliament thus it serves to end this hudud issue once and for all.

PAS should learn that politics is not about one's own agenda and rhetorics but also majority's acceptability. Politics is about perception and numbers!!!

To say that Najib has calculated his chances and planned his moves right from the time he visited Dr Haron Din at IJN some time back may not be correct.

He calculated from the number of Ah Jib Gor endearing calls at PRU13 that he would get votes from the Chinese, yet he got the Chinese tsunami.

I sometimes wonder if Najib does calculate. Like the effect on voters of Rosmah's acts and omissions. Or he simply lets things go as they please, except perhaps the Anwarul Al Juburi thingy.

But the fact that the UMNO ADUNs in Kelantan all voted for Hudud suggests there must have been some serious thinking and decision making. Though at Parliament level, it has to be more serious thinking as it will affect all states in the Federation.

But now that Anwar has been confirmed 5 years in prison (Senior Federal Counsel has just said that the pardon petition has been disposed of and Anwar is no longer MP), I think Najib may be more daring in his decision making. Which will be no decision to support Hudud.

You see, Najib wants a developed nation status no matter what. Supporting Hudud at the federal level would not encourage - may even discourage - those responsible for signing that developed nation certificate to do so for Najib. So, he'd explain to PAS his inability to support because of the multi-religious composition of our population.