Pemuda UMNO should shut up and solve taxi's legacy issues 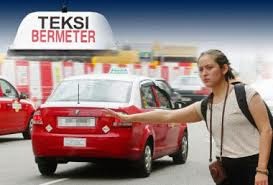 Those who disagreed with cab fare increase had expressed their views.

Some claimed these taxi drivers are unworthy of help for being supportive of opposition. At one time, they support the government but had betrayed despite assistance from government.

There are those who felt our taxi drivers does not deserve the raise due to their poor service, disregard for regulations and rudeness. And many behave as or actually are gangsters.

Though they are not completely right, everybody is entitled to an opinion and quite fair to say they are not wrong too. It is just unfair to paint all the more than 30,000 taxi in Klang Valley with a stroke of a brush.

Undeserving to oppose the cab fare increase are Pemuda UMNO and leaders of UMNO divisions. Instead of criticising Syed Hamid or SPAD, they should be addressing the legacy problem of the taxi industry that UMNO had created.

It is them and them alone that can do it, hmmm .... maybe other BN leaders too.

Before giving the political solution to the cab fare increase, read this article from Motor.me.my website below:

The Road Transport Licensing Board (RTLB) was set up in the 1970s to take over the licensing role of the Registrar and Inspector of Motor Vehicles (RIMV) with the aim of allowing more bumiputras to venture into the transport industry.

The RTLB was later renamed Commercial Vehicle Licensing Board (CVLB) and was under the Ministry of Public Enterprise, while RIMV was changed to Road Transport Department (RTD), remaining with the Ministry of Transport.

There was a clear separation of powers with CVLB issuing commercial vehicle permits and RTD registering and licensing vehicles and drivers, and followed up with enforcement.

But later CVLB wanted more and was granted enforcement powers. Its enforcement team was tiny compared to the RTD.

It also led to buck passing between these two enforcement agencies and is one of the main reasons why enforcement is lacking until today.

The arbitrary issuance of permits created a mess in the transport industry and the Land Public Transport Commission (SPAD) was set up in 2010 to overcome challenges free from political interference.

As there were over 32,000 budget taxis in the Klang Valley when 20,000 would be more than enough, SPAD did not increase the number of these permits.

Many people think that issuing permits to individuals would solve most taxi problems but the irony is that the majority of permits are individually owned and many are rented out.

After having written over a hundred letters on taxis in recent years, I sensed that we have reached the tipping point during the press conference held by SPAD on March 19.

Together with the new fares, new app MeterOn, passengers playing their part and our lawmakers giving more teeth to SPAD, transformation of the taxi industry will be shifted from neutral to drive.

But alas, some ministers had objected during the last cabinet meeting, each offering their own views such as the increase was too high; that public transport fares should not burden the rakyat; his ministry was not consulted; and whether it contravened the Competition Act.

Cheap taxi fare is a legacy of the past and should be left behind if we wish to move forward.

When public transport was poor and private cars were few, the majority of the population had to rely on taxis, including kereta sapu or pirate taxis.

Today, where trains are not available, stage buses are preferred by commuters, and SPAD is rolling out the MyBas project from April to ensure these buses run according to schedule, with or without passengers.

By 2020, the number of stage buses under MyBas would reach 4,000 units and costing the government RM2.7 billion annually to operate.

Although fares for stage buses are low, there is no increase. As train and stage bus fares are subsidised, it is up to the government to ensure that their fares do not burden the people.

But it would not be fair to suppress the income of taxi drivers as the old rate generates an income well below the poverty line of RM1,500 set by the Selangor government.

The fact that fares had to be increased substantially showed that they were too low.

It is the duty of politicians to express the sentiments of the rakyat but comments on the fare hike should also be based on facts.

The fare hike was announced on March 19 morning. In the afternoon, a group of people from the youth wing of a political party descended at SPAD HQ to handover a memorandum.

They warned that protests would be bigger if taxi drivers do not improve services and gave them one month to buck up.

The wing’s consumer squad will be checking whether taxi drivers are still not using the meters or choosing passengers and trips.

But such protests have no effect on taxi drivers as they are self-employed individuals scattered all over the country.

However, they can be a game changer and earn the respect of everyone by lodging official complaints against errant cabbies at the nearest SPAD or RTD office.

It would drive fear among taxi drivers when large numbers are hauled up. If not, they will continue with their ways, knowing that they can get away with it.

The youth wing can also show its compassionate side by arranging for aid to families of drivers under suspension, or are undergoing rehabilitation for substance abuse or uncontrollable anger.

Putting the fare hike on hold would lead us back to square one and allow the Taxi Transformation Plan to gather dust.

If we lack the courage needed to transform the taxi industry, we might as well deregulate it and allow kereta sapu to reign.

The legacy issues has a lot to do with political interferences by UMNO leaders and not to be left out are other BN component party leaders.

Someone should do a study and publish as to how much went to the Division's program and community work. And how much goes into their pocket?

It only reminded us of a fellow ANSARA who became a Division Youth leader in the 80s and gloated of getting 100 taxi permits. Professionally, he is a doctor and operates a private clinic so he does not run the business or drive cab but just rent seeking.

Unfortunately, some Youth member working at a pump station got to know of it and challenged him. He lost and was tarred out of the division. Kawan or not, padan muka!

That is just one example.

Off course, those older than the current crop of Pemuda UMNO leaders remember a company called Saujana. It was the first or one of the first taxi company that did the rent seeking business of squeezing the blood, sweat and tears of cab drivers.

There was few cabinet members, living and deceased, in the company's shareholding.

Sunshine Taxi is a familiar name. This and another company is linked to the Minister  in charge of Public Enterprise and got something like 3,000 taxi permits. It is heard the Minister cashed out. The chap is still in cabinet.

These taxi companies charge RM55 a days on these poor cab drivers but maintenance, petrol, and incidental expenses are absorbed by drivers. The meter still runs on Sunday. That is almost RM550 over 10 days and RM1,650 per month for the red and white cabs.

By right, Proton sells cars to taxi at discounted price but at that monthly repayment rate, the poor drivers are paying more expensive repayment than normal purchases!

If Pemuda UMNO is unhappy with the predicament of cab drivers and brave to do something about it, they could get the list of these rent seekers and free loaders amongst UMNO and BN component parties leaders. Pressure them to give the taxi permit to the impoverish cab drivers.

Do not be over impress should any one of them goes around with a pious exterior and said to play a beneficial role in the writing and publishing of Quran. Same treatment should be given to all rent seekers and blood suckers.

To add further, a high number of cab drivers whose blood are ex-servicemen or retired policemen. Quite often found are retired or second jobs of lower end staff of companies and government. It is a common to come across single mothers driving cabs to make ends meet or as second jobs.

Cab drivers would have came out solid for BN should the leaders are sensitive and responded to their needs. Cut out the rent seeking taxi companies or restructure the industry to be more just and humane to these common folks trying to make ends meet.

Hope Pemuda UMNO dare to put their shoes where their mouth is.

Pemuda Umno should do a "lawatan sambil belajar" to Singapore to find out how their taxi system is organised.

I have taken taxis every time I visit the republic. Invariably it is a pleasant experience (though the traffic jams in Orchard Road and the expressways can be exasperating and mind-boggling - where do all these cars come from with some of the highest car prices in the world!), with clean vehicles, efficient despatch systems, wide choice of vehicles (no Protons!).

So how about it, KJ?

Care to walk the talk?

KL Eco City developed by SP Setia on the Kampung Abdullah Hukum site has Pemuda UMNO as one of beneficiary through shareholding.

When UMNO lost Pantai Dalam TWICE. They blamed it on the lack of support from Malays.

How to support when they drive away the Malays from their kampung?

These people, they give free bullets to Opposition to shut them. And they moan why the support towards them has dwindled.

Everyone is entitled to a wage increase except if there are taxi drivers, bus drivers, lorry drivers.

While I am at it, applause to those bangang reporters who w/out fail would interview orang ramai mengenai kenaikan harga. What do they actually expect these people to say??? Bagus la saya sokong?? Cuba la tanya orang yang sama: apa pendapat jika tahun ini kebaikan gaji anda dibeku kan?

Quite sure there are many more.hehehe.

Opposition can see umno shooting their feet by opposing can fare hike. 60,000 voters for their's to take.

There are more other issue u can ride on..now the time to whack all the 3 stooges (DAP-PAS-PKR) on water deal and the pakatan wrekage on hudud. Go bang them!! Enemies are out there! Why the hell wasting ur bullet shooting each other?? Dont be Fu*kng retard!

The one thing not broken is corruption.

Why no denial from pemuda?

If I read pemuda umno mentality correctly, they would rather curse and label the blogger.

There is the likelihood they would the blogger as opposition barking dog. No one will believe that.

Anonymous said...
This comment has been removed by a blog administrator.
12:43 AM

This blog do not claim to may a respectable blog but comments using profanities and abusive language is prohibited. There are other blogs and social media that cherish comment with such level of language.

Surely pemuda umno will not welcome such kind of immature response to build such perception of them.

Maybe it is opposition :)

This blog do not claim to be a respectable blog ...

Pemuda umno? The ultimate yesman? Is this a joke? Really not funny