Crowning of the Sultan of Johor 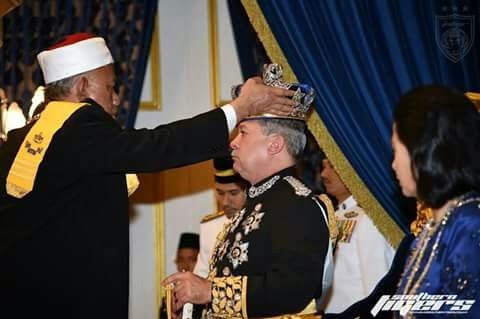 Sultan Ibrahim represents a new generation of royalty able to break past tradition to mingle directly and casually with the rakyat, express his views openly on issues and able to engage the media. Few bloggers here and many others had the honour of discussing issues with his Majesty.

His Majesty ascended to the throne in 2010 but the coronation was postphoned till yesterday. For Johorean, it is the first royal coronation in 55 years since Almarhum Sultan Iskandar decided not to do a coronation.

Johor Baru will be filled with street parades, fireworks and four days of free concerts at Danga Bay to commemurate the event.

March 23rd have already officially been gazetted as Hari Keputeraan Sultan Johor public holiday to coincide with the official crowning of the Sultan of Johor to replace the November 22nd public holiday. 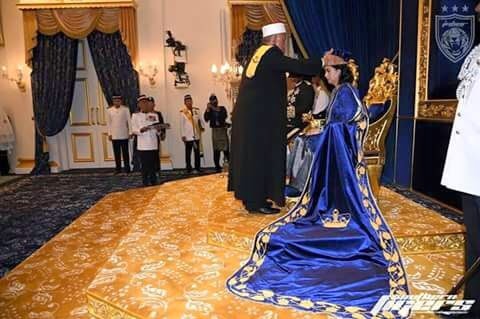 The same ceremony was also to crown Raja Zarith Sofiah Almarhum Sultan Idris Shah as the Permaisuri of Johor.

Some newspaper reported that the title is used for the first time but as once explained personally by His Highness, the title Permaisuri was the traditional practise in Johor and not Sultanah as used by previous Sultans.

The highlight of the celebrations when the Mufti of Johor placed a jewel-encrusted crown on Sultan Ibrahim Ismail can be seen in the video below:


The ceremony in Johor is unlike the use of tanjak in the ceremony of other Malay Sultan. The 1.6 kg royal crown was made by London jeweller J.W. Benson. Interesting background of the coronation can be found in NST here, You Tube here and Singapore's Singapore Times here.

People of Johore was able to witness the ceremony via RTM. The You Tube below:


An extract from Channel News Asia report here described Sultan Ibrahim as a Sultan with a difference:


Despite the grandeur of the occasion, many Johoreans feel their king is a humble man. Zabariah Mohd Nor, a homemaker, said: "He's a man of the people. We are pleased with his character."

Ellyza Yusof, a religious teacher, said: "Now we'll get to see the reality. God willing, this Sultan is a man of the people who stands by the people."

Certainly, the people will be paying close attention.

His Majesty and the family takes a keen interest in the welfare of the people and can seldom be seen visiting the rakyat at hospitals, flood relief centres, kampong homestay and even common folks warong.

This blogger had a late uncle who perform traditional massage and was paid a surprise visit by his Majesty for service at his humble home in Kampong Separap, Batu Pahat. Our uncle had only a common tikar mengkuang to offer his Majesty to lie on while he performs the urut. 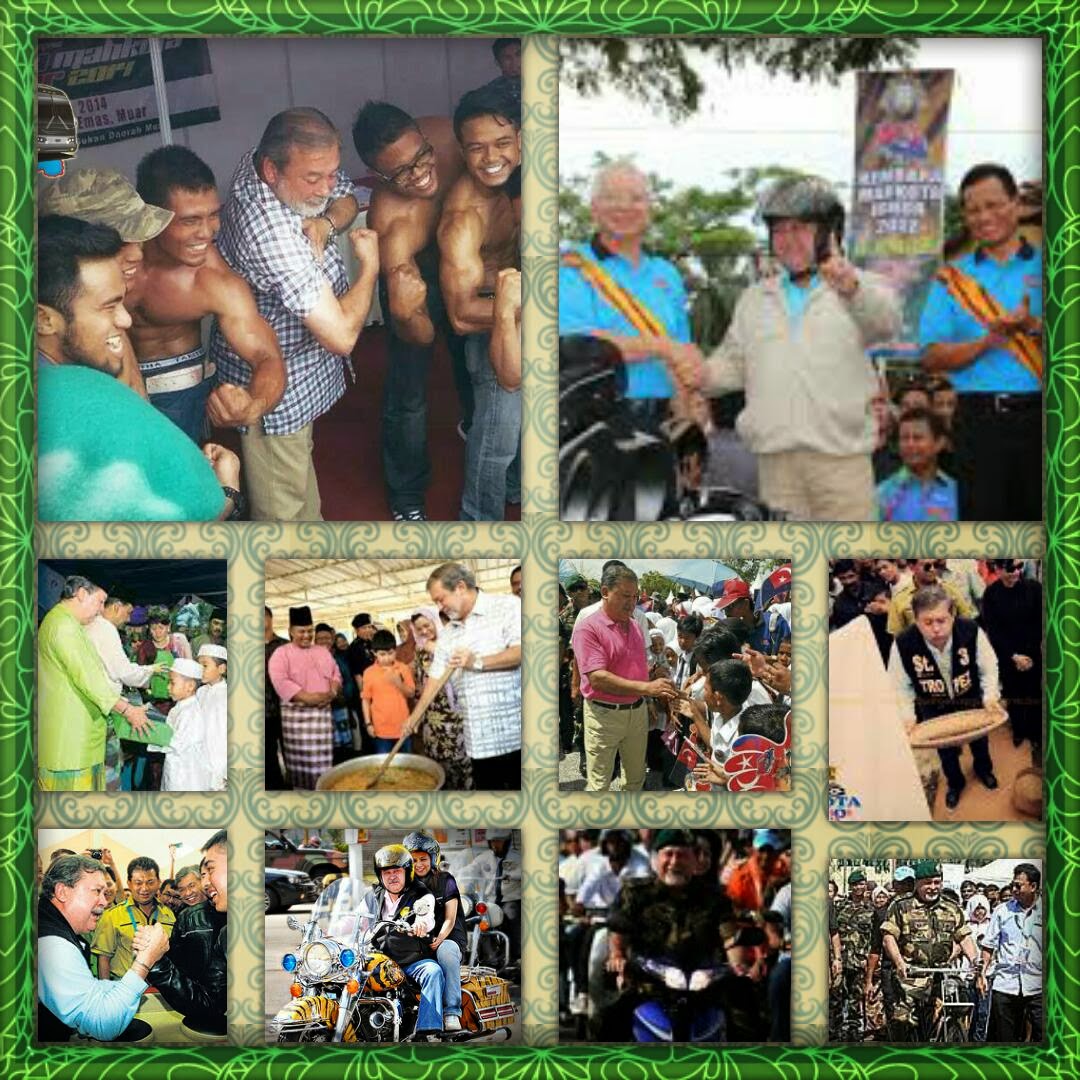 His Majesty made it an annual affair to touch base with the people through a program called Kembara Mahkota which was initiated since the days as Tengku Mahkota.

As Head of the State Government of Johor, his Majesty makes an effort to know the going-ons and gave his input to the administration. 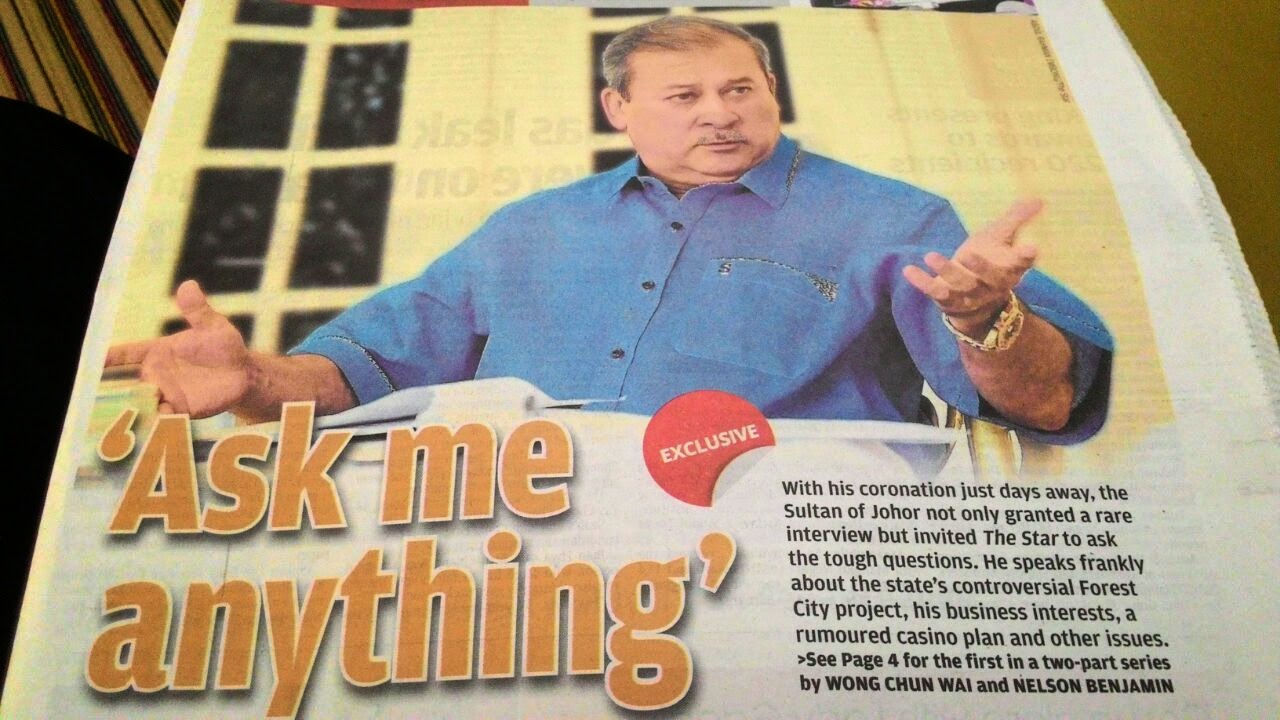 His Majesty is not unaccustomed to controversies but the difference with the past is His Majesty acknowledge the new environment of openness and make the effort to engage with media, privately and publicly.

His Majesty takes on questions from the media without any need for censorship.

To quote His Majesty from The Star interview, he said, "I think I am a friendly and easy-going person. I am straight-talking. I cannot stand hypocrites. I expect people to speak up. Be a man. You have asked me difficult questions straight to my face."

The Star certainly did.

In the first serie here, His Majesty express his wishes and hope for Johor, explained himself on issues relating his business interest, certain  development in Johor Baru and controversial land reclamation in Iskandar Malaysia. 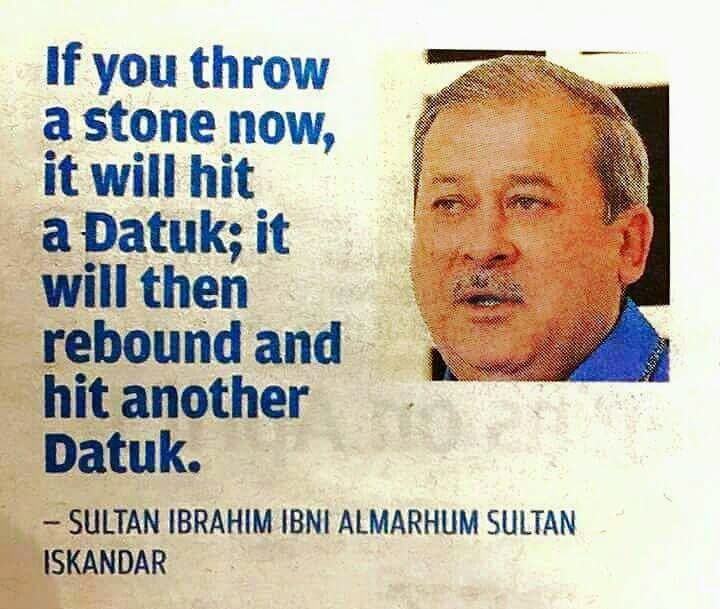 The second part of the serie here caught the social media buzing with the above quote on excessive award of Datokship.

His Majesty also covered issues on environment and state development. 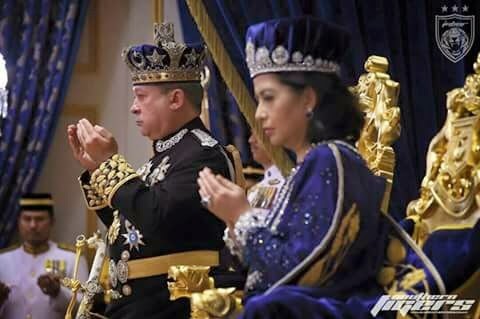 A ruler with such concern augers well for Johor.

The concern and sensitivity to the common people, and support from His Majesty will be much needed for the state administration to address basic livelihood problems faced by Johoreans in facing up to wave of political, economic and social change in Johor. 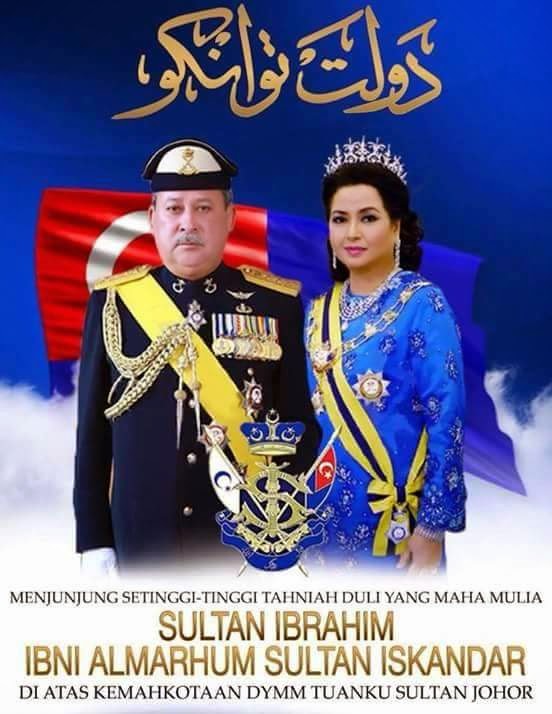 If I'm not mistaken, the Sultan's older sisters are Tunku Kamariah and Tunku Zabedah while his younger sister is Tunku Azizah (wife of Tengku Mahkota Pahang).

..If the Sultan do all the work then MB Johor what is he doing?..

Pomp and pageantry exhibited at the coronation serves nothing more than an illusion of greatness.

What is left of the tanah jajahan takluk great kerajaan Melayu Johor.

That strategic piece of island across Selat tebrau is not Johorean anymore. The occupants of that tiny red dot is now crucial and influence strongly on the economy, property and livelihood of common johor folks.

The rakyat could be put to a shock and awe display of grandeur for an hour or two but after that it is back to their humdrum real life of traffic jam, higher cost of living, homes they could only afford to see but never own, and economy over dependent on selling land and property to foreigners.

Instead of addressing these problem and showing empathy for the rakyat suffering, the soveriegn is in itself THE part of the problem and more.

His Majesty remain deluded like some leaders past and present in Putrajaya into believing the yearn for physical and visual develop status is the way to bring progress.

For the Sultan his idea of investment and transparent is paying premium land at market to force JSC to give him the necessary approval and sell it off to cina. Nothing new and great, the UMNO politicians have been doing it for years.

It would not be a surprise that the ideas came from some UMNO aristcrats. These UMNO aristocrats would intend agree and praise him as though his wayward ideas of development is his and will not be honest to tell him that the ideas are big but shallow. The physical facade does not generate real economic benefit then the single transaction and creates no muultiplying value.

Why fight but take a bite at the cherry too. Typical of feudel minds of ruling elites. Nothing different than court jesters to make the highnesses laugh.


agreed with you .t

To the Sultan of Johor detractors. Muar which used to look like a rubbish dump is actually clean. What have your Ketuanan Melayu/UMNO done for the people of Johor. Johor was also the last to get PLUS highway.

It is time for Ketuanan HRH The Sultan of Johor. Screw UMNO and their BN dogs.