Anifah's priority should be work, not cheap politics 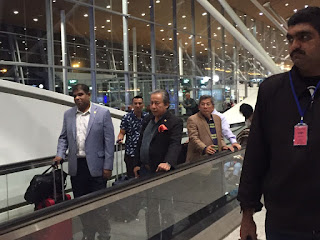 Lim Kit Siang, claimed as the de facto Opposition leader by Dato Najib, made a poser to ask why Foreign Minister, Dato Seri Anifah himself did not deny the rumour he resigned from cabinet.

Anifah is not answering because as mentioned by Dato Seri Ahmad Zahid, who revealed Anifah as the Minister that Azmin put into play with his tweet, left for Brussels on Saturday.

If unconvinced, the above picture is Anifah on the walkalator at KLIA on the way to board his plane on Saturday. He is in Brussels to represent Malaysia for a High Level Conference on Mediation.

Anyone doing serious work and not playing foolish politics or seeking cheap publicity should know that Brussels is the headquarter for the European Union.

Anifah should ignore Kit Siang in his second childhood.

BN leaders too fell into Azmin Ali's trap to promote his Saturday prank, below:

By right they should ignore and instead ask WTF would EU invite Malaysia for such a meeting?

What major mediation is Malaysia involved that is of interest to the EU?

Surely Malaysia have no business to mediate the exit of Britain from EU, or probable exit of France from Euro or new NATO arrangement between Western Europe and US.

The resolution against Israel at the United Nation is over and done with. Malaysia is no more a member of the Security Council.

On trade matter, it usually does not require the involvement of Anifah.

With Trump possibly withdrawing the US from international conflicts, EU would be an important platform to pursue matters on human rights, and various ethical and moral concerns.

The only possible reason Anifah is in Brussels has to be to get EU support for the OIC initiative (aka Malaysia inititive led by Anifah) to address the genocide of Rohingya by Myanmar government.

Anifah still has too many unfinished businesses for him to resign from cabinet.

Be it, opposition or ruling party, their priority would be the next GE 14 but not by playing cheap politics. Do they not know people are fed-up with such politics and voters turnout could be low at nect GE?

The ruling party, BN should be working instead of wasting time with efforts without any positive impact for BN.

Dato Azmin Ali did a lambong or to put a rumour into play. No name mentioned, and most said are speculative.

When refuted by several Ministers including Dato Mustapha Mohamed, Azmin insisted the Minister met him to express his intention to quit.

If that is the case, Anifah is most unlikely person to meet Azmin.

The mudah lupa segment of Malaysians may have forgotten that the lawsuit Anifah won against Dato Seri Anwar Ibrahim was related to the crossover game of 2009.

Taking it further back, they forgot Anifah refused Anwar's overture to jump ship in his 916 stunt as though he will takeover government.

The MF'er (more accurately BF'er) is still at it as he recently blamed his failure to the House Speaker.

Anifah neither trust Anwar nor PKR as a political party then. Neither the person nor the party is of highest integrity to command Anifah support. 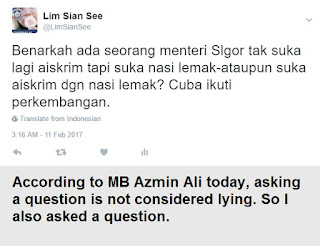 So Azmin must be in esctasy from an overdose of "ice cream" or nasi lemak to indirectly spin a claim Anifah met him and share such information and think it is credible.

If Anifah would not meet Anwar, who is Azmin?

Anifah would not waste his limited free time to meet Azmin. He rather return to meet his constituency in Kimanis, Sabah.

At the time Azmin release his tweet, Anifah was in Sabah doing work for BN. Those leaving government or party start having strange itinery before leaving. 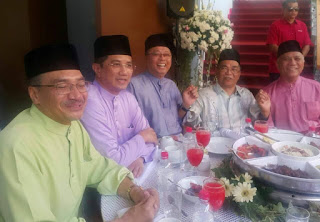 The only persons that recently met Azmin was revealed by blogger Husin Lempoyang here were Dato Seri Hishamuddin and Dato Ismail Sabri.

The blogger mentioned few possible names any political pundits would guess and disputed all the names as the likely Minister.

It reminds back to an opposition blogger sharing an opposition MP's thought as he stared at the BN MPs from across the Dewan Rakyat hall. He refused to believe the list Anwar boys' claimed could be enticed to crossover in 2009.

There is no credibility in Azmin's claim that Dato Nazri Aziz said, if any Minister intend to quit, they would have met him instead of Azmin.

Azmin was on childish mode when he responded to Dato Najib's denial. He said obviously Najib would deny but did not reveal any name yet.

He will not any name to keep the guessing going. And, he does not have a name. 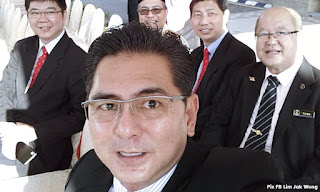 That was where Kit Siang stepped into the children playground to join the fray. He also said the idea to moot the exit is linked to a possible Sabah state election. Unfortunately, his fun was cut short.

Three state assemblymen and one MP from Melaka resigned from DAP citing the party has swayed from its original struggle.

The resignation game by Azmin backfired on Kit Siang.

Possibly, Kit Siang may have to takeover Lim Guan Eng's place in Penang and send Guan Eng to Melaka.

But Guan Eng was once tarred out of DAP Melaka for sabotaging popular Kerk Choo Ting to lose at Kota Melaka Parliamentary seat.

It could be Azmin is seriously ill from the overdose that he could not differentiate between one Minister and four DAP wakil rakyat. 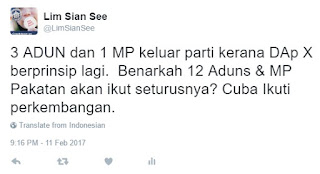 Are they quiting to join a coalition linked to Azmin and Mahathir?

Tengku Adnan also poke fun at Azmin. He said he heard Azmin is the one that is resigning.

Subsequently, Azmin put up a fake message to say Ku Nan is resigning and he himself denied. So adolescent ...

Well that is enough fun and game for the weekend. There is no credibility in the story any more.

If Azmin is finished laughing, he must start to look behind his back. He think he is smart and cunning but it won't be long before Ku Nan's words could turn out to be right! 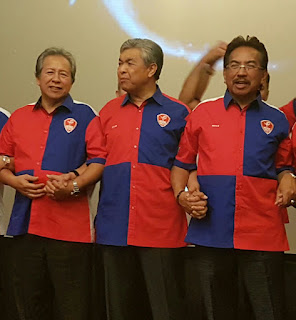 Talking about being serious with real work, Hishamuddin advised the BN machinery at the Tanjung Datu, Sarawak by-election to focus on winning and not be lulled to follow the opposition rythm.

That advise should be leveled at all UMNO leaders including himself

Without disclosing names and what, whim, why, when and how it happened, certain UMNO leaders are more interested in the next party election.

They get their boys to do cheap shots at each other than focus on preparing for the upcoming general election and be serious on their job.

In pursuit for international publicity and political mileage, even Deputy Minister did a boo boo and embarrassingly seen publicly as not understanding his own responsibility and how his own Ministry operate.

Anifah's effort have better chance at resolving the Rohingya issue than cheap stunts!!!!

It could be hishamuddin sharing something with azmin and he add more spin.

And zahid turned it around in his favour by highlighting himself with anifah.

Anifah and musa control sabah umno and the second biggest delegates in umno.