Off all people, Tun Dr Mahathir should be the last person to not know why foreign leaders do official visits.

Mahathir could be envious or jealous because no Saudi Arabian King made an official visit or undertake any major investment or donation during his 22 years premiership.

Most likely, Mahathir knows the the official visit to Malaysia would vindicate Dato Najib from the allegations made against him.

It was Mahathir who orchestrated the political assasination with people he used to dub as enemy of the state. He sparked the 1MDB debt problem.

Mahathir will need to get his not-so-maestro media spinners to discredit and nit pick issues on Aramco's RM31 billion investment in Pengerang's RAPID. 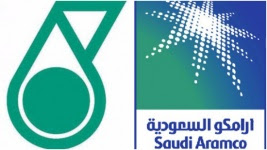 It was only end of January that Reuters and WSJ reported Aramco pulled out of negotiations with Petronas on the planned Pengerang refinery.

And, as usual, Singapore's Straits Times is only too glad to report anything negative on Malaysia.

These days oppositions in Malaysia are resorting to economic sabotage and cavorting with foreign medias.

It may not be a surprise of them trying to torpedo the Aramco and Canadian gas pipeline deals.

WSJ painted a picture the RAPID project could not sustain sufficient revenue for Aramco. They highlighted Malaysia as a political risk of a change of government.

Even some DAP minion in The Star here may have tried to playdown the RM31 billion investment as "RM7 billion" though written as USD7 billion.

Just before the official visit, Reuters and ST had to eat humble pie to report the agreement will be signed and witnessed by King Salman himself.

"The RAPID project is designed to process 300,000 barrels a day of crude oil and produce 7.7 million tonnes a year of petrochemicals.

The facility is planned as part of Petronas' Pengerang Integrated Complex that will include RAPID and oil storage facilities."

Saudi export more than a million barrel a year to China, more than the volumen exported to the US. Having a refinery and storage facility in Pengerang is strategic.

Petronas President, Dato Wan Zulkiflee dispell the rumours then to say the agreement was not signed yet. Thus there was never any issue of Aramco pulling out.

There could be possibility that lower oil revenue was the reason for Aramco to reconsider.

But diplomacy may have played part to convinced the Saudi on the strategic benefit of investing in Pengerang's RAPID.

Crown Prince, Prince Muhammad bin Salman takes a keen interest in Aramco. He understood the strategic importance of Saudi's presence in Southeast Asia and along the trade route between Middle East and China.

Aramco and the House of Saud has a long political and economic ties with the American.

The 50% stake offers them the opportunity to set foot into Malaysia and the region to explore investment opportunities beyond oil. 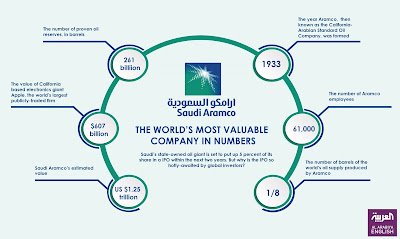 Aramco is planning to sell off 5% of the company in an IPO slotted for 2018.

It is to raise money to establish a long term sovereign fund for Saudi Arabia similar to the Norwegian Sovereign Wealth Fund.

A strategic fund manager in Menafin.com viewed it as a shift to "asset securitisation" model to finance its corporate sector and safeguard from the systemic threat of reliance on bank financing.

Prince Muhammad claimed Aramco value is USD2 trillion. There are valuations that placed it at USD10 trillion and market is trying to bargain hunt at USD400 billion.

However, there is no dispute that Aramco is sitting on an oil reserve of 260 billion barrels. That is 10 times that of Exxonmobil. Aramco's production capacity is only 10-12 million barrels a year.

It will be the world's biggest IPO ever and the size is four times larger than Ali Baba IPO. At USD2 trillion, it is more valuable than Exxonmobil, Citicorp and Ali Baba. [Read Forbes here].

Its listing is sought after by several financial centres and institutions. The impact on the global market is humongous [read Bloomberg here].

Finacialbuzz decribed the IPO "will not only help Saudi Arabia move away from the reliance on black gold but also move on to a more corporate friendly system that mimics the world’s other powerful economies."

Aramco may be faced with a reality check on its true valuation or being systematically pressured to reveal their true national wealth [Read Bloomberg and Oilprice.com]. 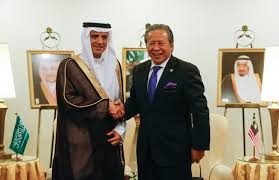 However, the tie-up between Petronas and Aramco is relatively small but important.

The agreement between Aramco and Petronas will supply 70% of the crude oil feedstock required for Pengerang. [Read The Star here]

RAPID is a now viable concern and will commence in 2019. It will be in time with expected surge in demand for oil for the region in 2020.

And, the relationship established could help realise the Canadian gas pipeline project and other Malaysian economic initiatives.

Mahathir doubted the Arab could be generous. They were not to him. The Aramco deal proves they can be. So it maybe about the personalities

The Saudi donated a total US$215 billion to various concerns in 2015. Recently, the announced donation for the rebuilding of Yemen for US$10 billion.

So US$700 million is pittance. Furthermore, most of it was returned.

As Mahathir's 1MDB issue is waning from the public attention, it is only the accusation that the RM2.6 billion donation from Saudi that is still in the public mind.

They should now ask themselves:


Why would the Saudi King make an official visit to bring an entourage of 600 (some say 850) which include all his cabinet members and 200 businessmen, and sign this multibillion deal comparable to China's FDI, if Najib had, in the  words of Mahathir, stolen money from the Malaysia-Saudi JV, Petrosaudi?

It does not help Mahathir's slanderous cause that King Salman endorsed an explanation made by Dato Ahmad Zahid Hamidi in the height of the 1MDB crisis that donation money was meant for regional Muslim cause and at Najib's discretion. [Read NST here] 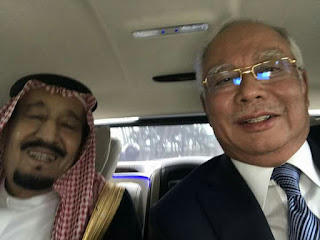 During a PPBM political rally in Sungai Buloh, Mahathir snaked a statement to cast doubt to say, "But we know the reasons these foreigners made visits to Malaysia. I do not need to mention here."

And, he twisted it to further to say, "But, they came not because of friendship, but there is something Najib could give them .... That is the reason they are here".

The spontaneous response would be:


If that is Mahathir's understanding and perhaps practise, did he repeatedly gave something to China, that the public did not know, for the six official visits he made as PM despite only once did China's President ever reciprocated with official visit to Malaysia?

The selfie of Najib and the King yesterday demonstrated their closeness. There is warm friendship between them. And, there is the long relationship between Malaysia and Saudi that can be traced 600 years ago.

It partly dispel Mahathir's allegation. Najib could not provide much to Saudi but instead King Salman could provide much much more.


From the vindication to various bilateral cooperations, Saudi will be donating to establish the King Salman Centre for Global Peace in Kuala Lumpur.

Saudi have committed to offer more scholarships to Malaysian students.

Many bilateral co-operations and trade link-up made. Of interest to many Muslims, they are hoping for higher quota to address the long wait to perform Haj.

Isn't it useful and beneficial to be friendly with everybody than being a loud mouth wiseguy, who late in life, proven to be all lies and treachery?
at 2/28/2017 04:21:00 PM