Valentine's Day love for the Constitution 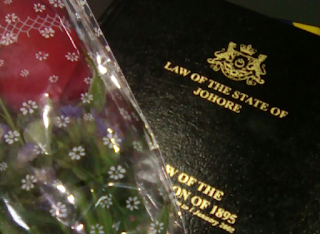 It is the annual debate of whether Muslim should celebrate this pagan ritual turned into a day to commemurate love in memory of a Christian Saint.

So one early morning message received suggested to forget Valentine Day but remember the death of war hero Leftenen Adnan and his fellow Askar Melayu comrades-in-arm.

Al Fatihah to all of them.

Take note that the battle took place in Singapore. The Askar Melayu fought to defend Singapore!

When forwarded to a friend, whose a Tan Sri Muhyiddin friend and supporter, he messaged back his agreement and also to ask to remember it is his birthday.

In Johor Baru, there was an unusual Valentine Day initiative by the assemblyman for Kempas, Dato Tengku Putra Haron Aminurrashid Jumat (TP).


It was not the state of esctasy of the Bangsa Johor to the announcement of his highness Tengku Mahkota Johor, Tengku Ismail ibni Sultan Ibrahim to run for FAM President.

There is euphoria in the air and the excitement was visible in the MAWAR hall that guess of honor, Tan Sri Datuk Mohamed Aziz, Speaker of the Johor State Assembly took the opportunity to campaign for TMJ by asking Tan Sri Annuar Musa to step down. 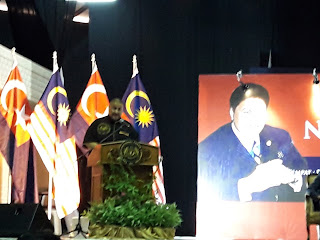 That was Johorean display of love and affection for their Raja and State.

It runs along the Valentine Day initiative by TP to hold a two hour dailog on the Constitution entitled "Negara dan Kenegaraan" (The Nation and Nationhood) for his constituency as his effort to express and promote love for the country.

She saw it as a unique event and first ever done by an elected representative to educate his constituency on the historical development and role of the constitution in nationbuilding. 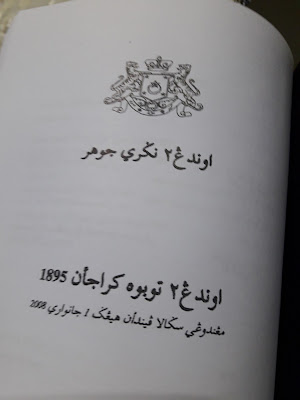 The event in Johor has its significance.

The Johor State Constitution (Undang-undang Tubuh Negeri Johor) enacted in 1895 was the first state constitution among the Malay states of Tanah Melayu.

It legitimise the Bangsa Johor (dependent on the understanding of Bangsa be it was race or nation).

Subsequently, other Malay states, Federated or Unfederated follow suit and used the Johor constitution as reference to establish their own constitution.

TP had a passionate call, which got coverage by NST, and it is to emulate what the Americans do at their High Schools.

Cvic subject in Malaysian schools have since been incorporated into history subject butit is not effective.

JOHOR BARU: The Federal Constitution and the Johor State Constitution should be made compulsory subjects in schools. Kempas assemblyman Datuk Tengku Putra Haron Aminurrashid Jumat said every citizen should know the provisions in both the Federal and state constitutions as the knowledge would enlighten them on the laws of the land and the rights of every citizen.

“If we are ignorant, we will easily be influenced and take whatever is dished out to us as the gospel truth,” he said this during at a dialogue titled ‘Negara dan Kenegaraan’ (The Nation and Nationhood), which was jointly organised by the Patriot Foundation, Kempas state seat office and the Johor Barisan Nasional Youth Volunteers Group.

“The syllabus should be prepared by constitutional law experts and teachers need to be trained to teach the subject,” he said. Johor speaker Tan Sri Mohamad Aziz launched the forum at Dewan Sultan Abu Bakar, Johor Heritage Foundation here today. 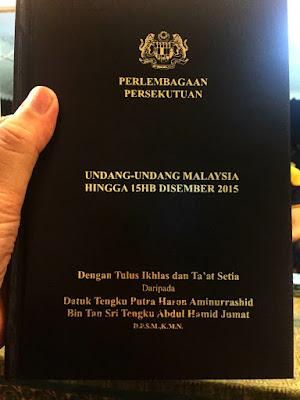 The forum was held in line with Prime Minister Datuk Seri Najib Razak’s “Negaraku” initiative aimed at increasing the sense of patriotism to the Malaysians.

The dialog was conducted in a simple but legally educational language for the participants which cover all ages, including students from schools within the constituency.

Shamrahayu maintained the love theme of the day as she distinguished between the love for their state and loyalty to the federation as she explained the development of state sovereignty to the formation of the federation.

During the Q&A, she helped to answer why the arrangement with Sabah and Sarawak is different.

When Malaysia was formed, Sabah and Sarawak put terms and condition to the union. While, the Malay states did not put any terms or conditions to the formation of Federation of Malaya (Persekutuan Tanah Melayu).

There can be those facing a dilemma in their love for the state and loyalty to the federation.

Nevertheless, she highlighted that the Rukunegara is a pledge of love with the highest level of love is described in Malay as "cinta keluhuran" meant for the constitution.

Love for the state or nation is stated as "kesetian pada Raja dan Negara" (loyalty to the King and Country). Nationhood in Malaysia combines the concept of sovereignty of King and Country.

The presence of ruler provides for stability and continuity. Shamrahayu quoted opinion which believed that democrasy without Raja leads to anarchy.

In the context of Malaysia, the so-called social contract before independence of Malaya was actually the negotiation between the ruler and British to end the in today's terms the termination of out-sourcing of state management between ruler and British.

Technically, it is not a colonial arrangement though practically speaking it was.

The rakyat (people) was not a party to the agreement. However, the state constitution was a document in which the ruler define the power and condition for the appointed rakyat to administer the state.

The Johor ruler then, Almarhum Maharaja Abu Bakar broke away from past practise of being refered for decisions and at times, decisions are made at doc.

Over time, the power of the ruler and government is more define in the federal constitution. 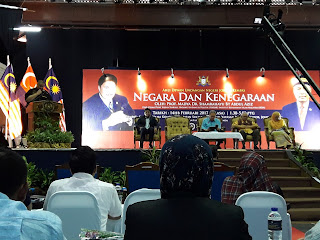 A question was asked on the latest movement by few legal and liberals for the introduction of Rukunegara as preamble to the constitution.

Rukunegara was established in response to May 13 1969. The epistemology of the constitution dates to the Melaka Empire in early 15th century.

Shamrahayu is of the opinion that the preamble could be introduce before or after the constitution is written.

If the Rukunegara is to be used as preamble, the one she see as relevant is "Kesetiaan pada Raja dan Negara" (loyalty to the King and Country).

However, the purpose of the preamble need be ascertain and clearly agreed upon. There are countries in the world that could not establish a proper constitution because of the dispute over preamble.

She believed the issues of nationhood need be sorted out before a preamble is introduced.

On that note, she called on all Malaysians to adopt an attitude described by the term patriotism ego.

All countries have issues and problems. Let it be solved from within and among ourselves. In facing up to other country or citizens of other countries, Malaysians should put a united front and not be badmouthing the country.

Some Malaysians are in the habit of doing so. The rest of Malaysians stay quiet. For their own expediency, some allowed it to happen.

Malaysians must develop the ego to penalise those without.

Watch "The Most Sinful Day of The Year" on YouTube
https://youtu.be/PP18kXUF0oI