Islam itself is not the source of terrorism and it is critical to include Muslim countries in the fight against Islamist terror, German Chancellor Angela Merkel has said.

Ms Merkel, who has been critical of the US ban on travel from seven Muslim-majority countries, made her remarks at the annual Munich Security Conference, with US Vice President Mike Pence in the audience.

The Chancellor said European countries could not fight Islamist terror alone and urged predominantly-Muslim countries to join the fight.

“I think, those countries, first and foremost have to give a contribution. Because only in this way we would be able to convince people that it is not Islam that is the source of terrorism. But a falsely understood Islam,” she said.

Ms Merkel also renewed calls for Islamic religious authorities to speak “clear words on the demarcation of peaceful Islam and terrorism in the name of Islam”.

She added: “We as non-Muslims cannot do this, it should be done by Islamic clergy and authorities.”

Her comments come after US President Donald Trump signed an executive order banning travel to the US from seven predominantly Muslim countries.

However, the Department of Homeland Security suspended the enforcement of Mr Trump’s immigration ban following a nationwide locking of the executive order by a Washington federal judge.

Ms Merkel also called on Europe and its allies to cooperate with Russia in the fight against Isis, in spite of tensions over Ukraine, Syria, alleged cyber attacks and the spread of “fake news”.

“The joint fight against Islamic terrorism is one area where we have the same interests and we can work together,” she said.

“It is particularly bitter and sickening when terror attacks are committed by people who claim to seek protection in our country,” Ms Merkel said.

She added: “As we go about our lives and our work, we are saying to the terrorists: ‘You are hate-filled murderers, but you do not determine how we live and want to live. We are free, considerate and open.’

“All this is reflected in our democracy, rule of law and values. They are the opposite of the hate-filled world of terrorism and will prove stronger than it. Together we are stronger. Our state is stronger.” 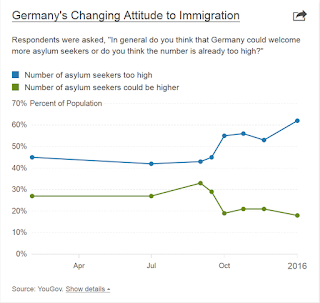 She defended her decision to allow around a million refugees into the country over the last two years, stressing “how important and right it was for [the] country to help those who really need our protection find their feet here and integrate”.

“We are stronger together. Our state is stronger. Our state is doing everything to guarantee its citizens security in freedom,” she said, before pledging that in 2017 the government will take action quickly “where political or legal changes are necessary”.