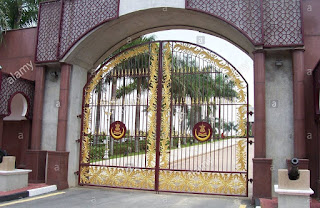 Pursuing to this blog's posting here and here on MAIS issue with several parties including Banks, Rockybru wrote in an update posting here that:


... MAIS demanded that the bloggers apologize to the Selangor Sultan in writing, within 24 hours, or it would sue. The Istana, for the record, made no such demands of me.

As far as MAIS denial on the allegation of throwing the name of Sultan, it is taken on good faith.

However, without a formal request from the Istana, MAIS demand on bloggers to apologise to the Sultan came out looking rather odd in view of their denial.

More so, it is beyond the financial means of bloggers seldom slandered as receiving "chicken feed" to spend money to advertise in mainstream newspapers.

In Rockybru's posting, he highlighted a Bernama report of a press release by Bank Muamalat to inform that MAIS intended to annul Concession Agreement and Payment Guarantee to the and other two Banks.

This involved a RM125.8 million Syndicated Financing to Redha Resources which was awarded a BOT contract by MAIS to build hostels for KUIS.

Putting aside the issue of throwing the Sultan's name, the more relevant issue and the crux of our earlier posting is about MAIS defaulting as guarantor and KUIS defaulting on their payment.

However, KUIS, presumably directed by MAIS, did not pay the contractor and as guarantor, MAIS did not honour their guarantee to Redha and the Banks. In turn, Redha defaulted with the Banks. The Banks may pursue Redha and directors. Subsequently, it will be pursuing MAIS.


The CF issue is settled.

There is no more reason and excuse for MAIS to withheld the money. As good Muslims, they should continue to honour their agreement and guarantee. It is unholy to deprive the rights of others. More so, a court has made a judgement.

To repeat a quote from the earlier posting:


"... it is a great injustice and zalim on the part MAIS on the contractor Redha. Surely the institution acting as guardian of Islam for the state of Selangor has no intention to raise money by haram means!"