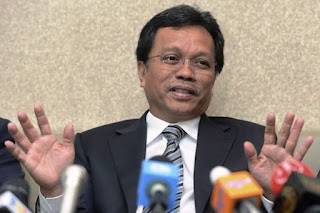 Such stories on Dato Shafie Apdal's corruption is plenty. Putting together admissible proof in court is one issue as it is tedious to put an undisputable case. However, existing proofs show corruption exist. Indications leading to Shafie are plenty and an open secret in Sabah.

When he led KKLW, many projects exist on paper and paid for but it was either not delivered or never too off. He thinks he got it all covered up with himself passing responsibities to KSU or the state is in charge of certain aspect of projects.

The money trails are every where and traceable from within the country. Someone and somebody are bound to speak. More so, when they are detected and caught. These white collared criminals can't survive even a night in a mosquito infested police jail.

It leads back to an earlier hint of PMO being infiltrated by Shafie Apdal people to send misleading report to Dato Najib. Apparently, it raised a few eye brow. For their comfort, this is not a joke or fun and games. There are names.

One must understand that Shafie was not rejected from UMNO but only suspended. His reaction to quit the party and start a new opposition party to take on BN in Sabah was an over reaction. It indicate something was not right.

His suspension was proposed by a members of the UMNO Supreme Council from Sabah. That may have made him hot under the collar. He knew lots of his misdeed will be out in the open. The only option is to join opposition thus any expose on him could be diverted as mere politically motivated.

Despite the obvious, two position holders in UMNOt tried to open a passage back for Shafie. They were trying to bring him back!

Thank gawd it was rejected. How could they even think of making peace with someone so corrupt, and immorally tainted as Shafie. 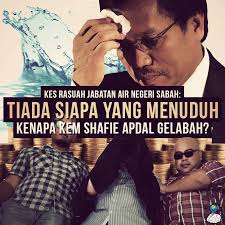 The MF stole money from the rural and poor.

Billions were spent by Najib administration for rural infrastructure but the bulk of it were not delivered and money stolen. These poor Malaysians had to continue to endure the hardship.

Shafie can come up with various excuses like claiming he has no power, blaming Dato Musa Aman and Tan Sri Pairin Kitingan, questioning why charge under AMLA, etc., all those who benefited from the projects are his people - proxies, nominees, cronies and families.

All contractors in Sabah knows that they will never get a contract with KKLW unless they are associated with Shafie. Only newly incorporated companies with qustionable track record and shady characters as shareholders and directors get KKLW contracts.

Thus, these indicate there are infiltrators inside PMO is not difficult.

In all contract game, the owners or directors of companies may not necessarily be the true owner. The owners are the one with influences and friends in Ministry of Finance, or various departments that can release or hold the cheques forever.

Getting the contracts is one thing but getting paid is another. All cheques will come back to back with another set of cheques. So the person with contacts inside to approve or speed up payments or hold back payments are the real owners.

On top of that, those with the connections make a contract as only paper projects or do a KKLW tong biru 1,000% mark-up.

On the ground, if one knows who and how to ask the question, one will know who gets what and how much. The proofs is something else.

For PM-sake, those taken contracts from Shafie are tainted and compomisable. They are subject to Shafie's manipulation and blackmail. And they are security risk to PM.

Siapa makan cili dia akan rasa pedas (those who eat chilies will taste the heat). Those who ask around and speak with an angry tone to the earlier posting are likely to be corrupt. It does not matter whatever caution they are throwing. It could indicate they too are morally corrupt.

The moment they talk of proofs and advise against making slanderous defamation, it means they are defensive of Shafie. They should be demoted to janitorial duties.
at 3/27/2017 11:29:00 AM