Most stupid survey and statement ever from a TI-M President 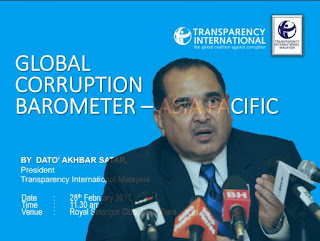 From TI website here, the role of TI-M reads as:


From villages in rural India to the corridors of power in Brussels, Transparency International gives voice to the victims and witnesses of corruption. We work together with governments, businesses and citizens to stop the abuse of power, bribery and secret deals.

However, the statement by TI-M President on the 2017 GCB survey was neither a "voice" nor effort to "work together" to stop corruption. It was politically motivated.


... Akhbar Satar said the results of its 2017 Global Corruption Barometer (Asia Pacific) showed that 54% of the respondents aged 18 and above stated that the country’s economic problems should be the government’s priority.

In contrast, only 15% of the respondents felt corruption and bribery should be the top priorities addressed by the government.

The survey is about corruption thus other matter is of no concern. If that is the attitude of the majority of survey respondents, then the study is inconclusive or unlikely to draw any conclusion. Yet it was  spin as similar finding with Rafizi's most likely to be manipulated survey.

Despite the questionable sample and subsequently, faulty analysis, FMT here reported Akhbar made a political remark to conclude 'fight against graft needs statesman, not politicians'.

This must be the most stupid survey finding and statement to come from TI-M President. Does he honestly think when brought back to power, Tun Dr Mahathir will abolish graft?

Undoubtedly, measuring corruption based on perception has inherent shortcomings. However, it can be viewed positively and policy maker, institutions and graft busters can take cognizance. This time it is too glaring that Dato Nazri Aziz is fair to ignore the survey:

Minister says he is more interested in combating real corruption than in trying to change 'whiny' Malaysian minds. 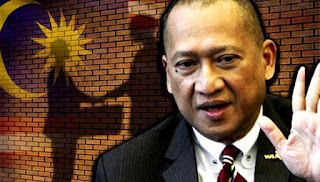 KUALA LUMPUR: The 2017 Global Corruption Barometer report by Transparency International-Malaysia (TI-M) is merely a measure of how Malaysians perceive corruption and does not show the truth, says Tourism and Culture Minister Nazri Abdul Aziz.

“We are not worried because it is only perception. There is no truth in it. People can believe what they want to believe.

“For many years we have been ranked very low by TI-M. Even bringing in its former chairman as a member of the cabinet didn’t help,” he said, referring to Paul Low, Minister in the Prime Minister’s Department who was formerly TI-M chairman.

The 2017 Global Corruption Barometer report yesterday revealed that 60% of 1,009 respondents polled felt that the level of corruption in the country had increased in the past year.

Speaking during a press conference, Nazri said he was more interested in fighting corruption than in referring to a perception index.

“It is more important to fight corruption than to influence Malaysians’ thinking. Malaysians are people who like to complain and whine.

“So, of course, I have to say that I am not bothered at all by the perception index.

Nazri praised the Malaysian Anti-Corruption Commission (MACC), saying Malaysians should support its efforts to combat graft in the country.

“We should all give our fullest support to the MACC and not demoralise them by perceiving that corruption has doubled.

To demonstrate the faulty finding, the perception is: 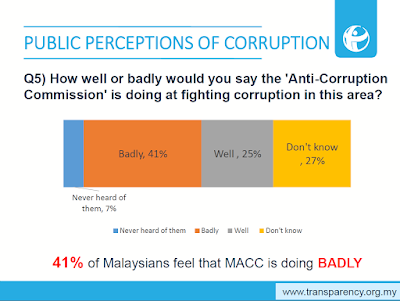 This is despite the intensive action of MACC for the last 8 months since the appointment of Dato Dzulkifli as new Chief Commissioner. In the last TI Corruption Perception Index, Akhbar commended MACC for their aggressive effort.

Strangely, the public feels that corruption is on the rise as compared to the relatively docile MACC under the previous chief. How come the survey still register such finding? 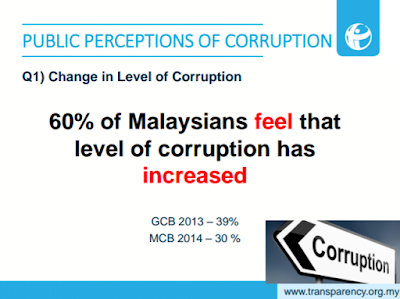 It is unfathomable that TI-M could not spot this inconsistency. Is it being massaged by interested party with close link to HELP Institute and interested to make a Keling comeback? Is he playing politics or combating corruption?

There are lots more. For instance, the sample is fairly biased against police, tax officials and local government: 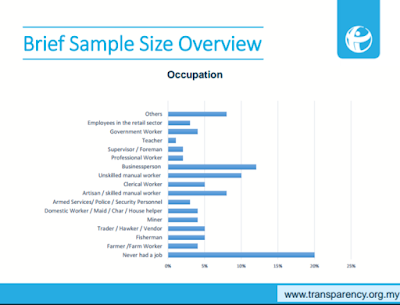 The above sample view the following institution as corrupt: 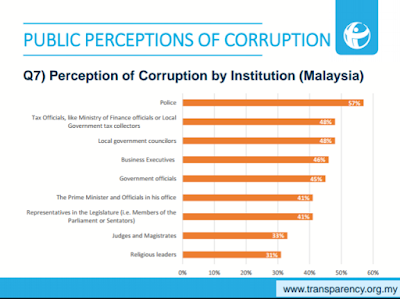 The sample is not likely to have high percentage of them having direct dealings with the Prime Minister and Officials in his office, Representatives in the Legislature, and Judges and Magistrates but yet perceive them as corrupt.

True enough, it does not tally with their bribery experiance: 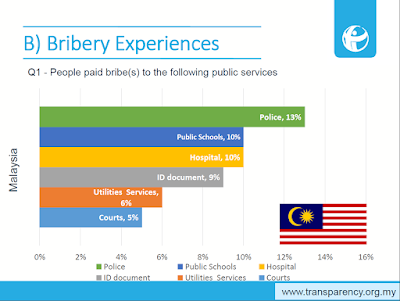 Only 13% and 5% had bribery experience with police and courts, yet 57% and 35%, respectively perceived police and judges as corrupt. It showed how ill-informed the sample is to make an educated view.

Furthermore, the indifference of this sample towards corruption is reflective in these answers: 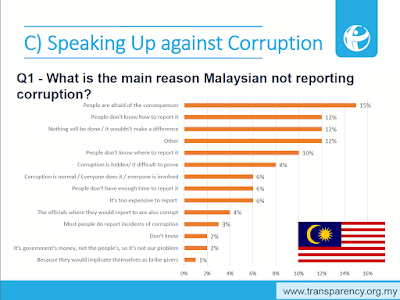 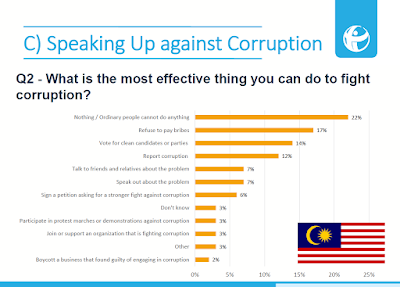 To conclude, this survey is deficient and bias. Insufficient analysis and thought was done. Too many inconsistencies in the respondents answers. More thorough study beyond TI template survey need be done to truly gauge perception. 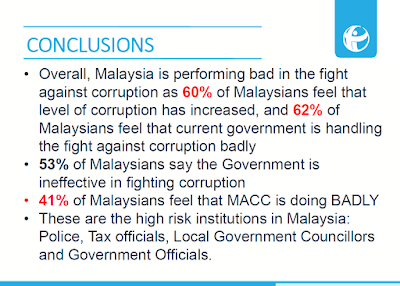 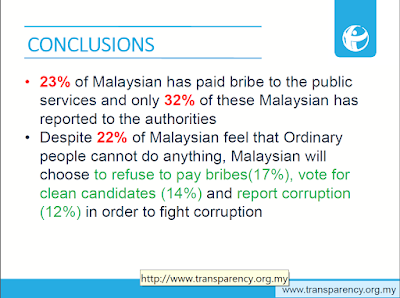 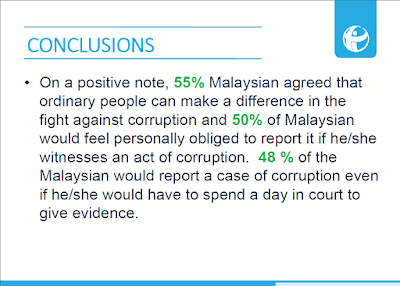 Where did the last conclusion came from?

And, Akhbar recommended among others for people to be given the tool and protection to fight corruption to reduce fear of the consequences. The majority of his sample are passive, indifferent, and ill-informed, thus they need education and information, not tools!

The fact that he insist on making recommendation and a negative one despite an inconclusive study and incoherent conclusion makes one believe he has ulterior motive.

Surely it has nothing to do with Dato Paul Low is due to vacate his Senatorship and Ministerial position. By maintaining a negative perception of corruption, is he hoping government will seek help from TI-M or even appoint himself as Senator and Minister?

Have heard a former MACC top official aspiring the same. For Akhbar, please no. This Keling is too stupid.

Why don't you sue them? Next Tuesday perhaps?

I would presume you think you jut gave a clever statement. Before any Tuesday, Barry Wain should have been sued more than 15 years ago!