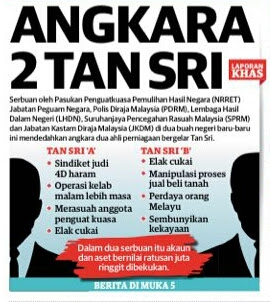 Mingguan Malaysia frontpage today is a major scoop in the fight against corruption, tax evasion, and abuse of power.

While, Tan Sri "B" was raided also for tax evasion, manipulation of sale and purchase of land, trickery on the Malays, and hoarding wealth.

If it is Kok Ping, he was the person that pressured Lim Guan Eng to stop the cancellation of development of Kg Buah Pala as promised by both Guan Eng and Dato Seri Anwar Ibrahim during GE2008.

He sits on the board of the Penang Chinese Chamber of Commerce together with Guan Eng's wife Betty Chiew. However, confirmation is still awaiting and it may likely not be him.

Before any claim of planned raids to hit at opposition supporters and donors, Tan Sri "B" is believed to be close to a BN-friendly Sultan and in a BN state.

Rumour is speculating Tan Sri "B" is on holiday abroad at a country in the region with a royal companion.

The typical public would naturally speculate his departure have something to do with buying time and trying to use his palace contact to relieve himself.

Also much talked is Tan Sri "B" was awarded construction of a new airport but abused the position to buy land for cheap and through unsavory schemes.

At a time, Dato Najib had companies getting government contract to participate in SL1M to help elevate graduate unemployment, they refused to do so.

Furthermore they abuse the opportunity to buy land in the Malay majority areas.

Malays in area planned for the construction of an airport should demand for higher prices for their land and not give in to brokers so-called professional advise that it is overpriced. These people will be making billions!

Talk, and it is just talk that is Tan Sri "A" and "B" had collaborated in  a hill development. It is talk and no names known.

In fact, Tan Sri "A" may not be as the MMO report in 2013. Another source claimed it could be linked to a southern based Tan Sri "C" reknown to be involved in similar activites as Tan Sri "A".

If the earlier speculated Tan Sri "A" is likely to use Lim Guan Eng and DAP to apply political pressure and Tan Sri "B" could apply palace pressure on NRRET, MACC, IRD etc, the Tan Sri "C" could apply pressure through an underworld link by the nicname Tiger Head.

Street talk claim Tan Sri "C" was hit badly in mid-January as a result of four nighclubs and 23 smaller premises entertainment outlet of his were raided.

Subsequently, it is said he has put out a death warrant for the current Attorney General, and NRRET members, which will include MACC, IRD, etc.

Latest from The Star: Graft and tax evasion, two Tan Sris and a Datuk Seri under probe 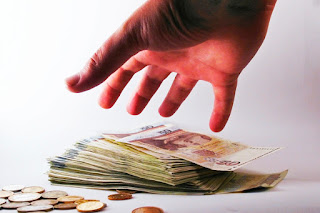 For those not familar with NRRET, The Mole column, "Plugging the leakage" touched on the Special Task Force last week:


Najib has done more in this aspect but not known to the public. A Special Task Force (STF) has been established by Putrajaya since 2011 to curb financial losses from uncollected taxes and other sources of revenue.

STF works discretely with publicity given to the relevant agency. STF is synonymous with a certain politicised issue, thus most Malaysians are not aware of an STF that is called  the National Revenue Recovery Enforcement Team (NRRET).

The outfit led by the Attorney-General Office, include, among others, the Malaysian Anti-Corruption Commission (MACC), Bank Negara Malaysia, the Royal Malaysian Customs (RMC), the Inland Revenue Department (IRD) and the Domestic Trade, Cooperatives and Consumerism Ministry.

The role of the NRRET, led by current MACC Chief Commissioner is to investigate cases of tax evasion by individuals and corporate bodies, evasion of customs duties, activities of smuggling, and misuse of subsidised goods.

In the earlier years of 2014, IRB saw a 100 per cent increase in collection to RM140 billion within the initial three years and correspondingly, RMC saw an increase of RM10 billion to RM36 billion within five years.

Today, IRB can proudly target a collection of at least RM200 billion a year.

In addition, NRRET investigates the illegal outflow of funds and related acts of corruption. If NRRET and the participating agencies are spared from budget cut – better still, increase its budget, th government can do more plugging of leakages and increase its revenue.

A former police top official once described illegal activities or underworld economy as worth as much as RM500 billion a year. And, another source with access to black economy “businessmen” believed it could be as much as half the national Gross Domestic Product (GDP)!

Intertwined with the black economy is corruption, in which the bulk of it involves civil servants and particularly, enforcement agencies officials taking kickback to turn a blind eye or collaborate with offenders. 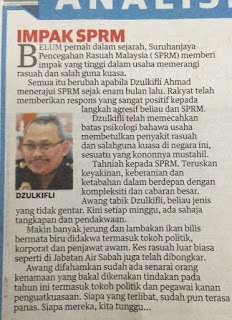 Awang Selamat of Mingguan wrote in his column today: