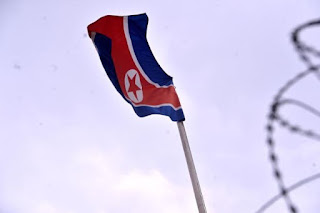 On Sunday, CNN here reported North Korea launched four ballistic missiles in which three missiles  reached into Japan's Exclusive Economic Zone. It is believed to be a provocative reaction to a South Korea-US joint military exercise.

North Korea claimed they have the capability to launch Intercontinental Ballistic Missile (ICBM) to the US However, CBS News here reported the US do not see they have reached the level of capability. However, Washington is concerned and see it as a serious threat.

Washington Post here reported "China expressed its dismay over the launch, with a Foreign Ministry spokeswoman saying it “opposes” launches that undermine U.N. resolutions. Russia, meanwhile, was more blunt, describing itself as “seriously worried” about the launches which raise tensions in the region."

In last night's China Global TV program with Tin Mei, a Senior Captain in the Chinese navy claimed that contrary to the common belief, it is not easy for Chinese to "control" North Korean military action. UN will be calling a special meeting on the missile launch.

The North Korean reaction may have to do with the heightened tension with Malaysia due to the investigation on the murder of Kim Jong Num is leading to North Korean agents.

US is calling for North Korea to be relisted as countries practising state sponsored terrorism. 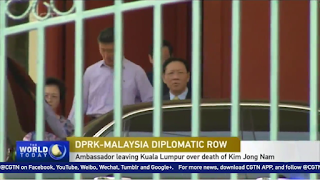 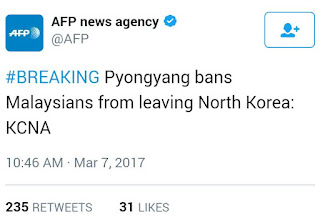 It is tantamount to holding Malaysians under hostage. One can read in The Star report here.

CGTV here reported: The Malaysian Embassy staff burned documents and some left carrying luggage. On Tuesday morning, other staff lowered the flag of Malaysia and the flag of the Association of Southeast Asian Nations. Later, three cars left the embassy in succession.

In addition to those embassy staff and family reported by Bernama, there are about 100 Malaysians working or doing business in North Korea. 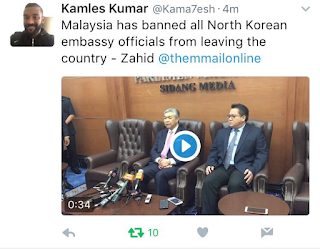 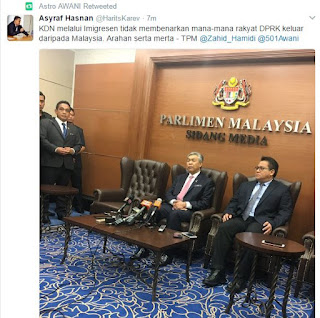 There are more than 1,200.North Koreans in Malaysia. And there is an opinion viewing them to be mostly North Korean agents. Our securities have to be on alert.

1.      I condemn in the strongest possible terms North Korea's decision to prevent Malaysian citizens from leaving the country.

2.      This abhorrent act, effectively holding our citizens hostage, is in total disregard of all international law and diplomatic norms.

3.      As a peace-loving nation, Malaysia is committed to maintaining friendly relations with all countries. However, protecting our citizens is my first priority, and we will not hesitate to take all measures necessary when they are threatened.

4.      I have summoned an emergency meeting of the National Security Council. I have also instructed the Inspector General of Police to prevent all North Korean citizens in Malaysia from leaving the country until we are assured of the safety and security of all Malaysians in North Korea.

5.      Our hope is for a swift resolution. I call upon the North Korean leadership to immediately allow our citizens to leave to avoid any further escalation.

The North Korean is in a state of panic following suspect in the murder of Kim Jong Num is hidden in the embassy. Read CGTV here.

A Malaysian facebooker analysed the event as follows:

North Korea forbids Malaysians from leaving : What happened, why it happens, and what should we do?

North Korean officials were reacting in desperation, to protect the integrity of their Supreme Leader from being further implicated in the case of his brother's death.

Their Ambassador to Malaysia were making statements earlier, in futile attempts to diffuse such implications. He was desperate too. I was thinking that if he didn't make all these statements, he would have been shot death like his predecessor as soon as he is back in North Korea, for "not fulfulling his duty to defend the integrity of North Korea". Malaysia's act of casting him out as PNG might came as a relief to him : at least he had "defended" north korea's stand and reputation, enough to warrant his expulsion. Honestly speaking, him as a person, has no choice but to continue attacking Malaysia, which by working on SOPs and Truth might compromise North Korea's supreme leader's integrity.

All they wanted, was for Malaysia to stop the investigation, and autopsy, or anything that could reveal the truth, the truth that is inconvenient and compromising to their supreme leader.
Out of desperation, and running out of options, they had to create as many incidents and events possible to pressure us. So they started to make their ambassador attack our government's integrity, accusing us of conspiring with other countries against them. too weak for us to succumb. almost no effect.

Then now they held our citizens ransom. (which in every logical sense, would be futile too), unless they do so quietly and made their demand quietly, which is something they are not "used" or "familiar" to.

We of course, retaliated by forbidding their citizens from leaving.

The subsequent cause of actions, is likely to derive from this "ransom" : negotiations, discussion, peace talk, under-the-radar negotiations etc etc.

All they wanted is to have the body of Kim Jong Nam back, and stop all conversation that could have been generated out of Malaysia's investigation to his cause of death.

We, a sovereign state, cannot do that. We cannot "break our own laws" just because another country demanded us to. If we stop our investigation and return the body as demanded, we are setting a dangerous precedent and opening up a dangerous floodgate of "inviting foreign espionage" to happen in Malaysia. Any country or government could arrange for their murder target to come to Malaysia, and have them killed, and demanded their body and investigation to be reverted back to them.

Also, our sovereignty would be undermined greatly. Other countries will then put in their Foreign diplomacy note, that Malaysia is a country that succumbs and bow down to foreign demand easily. That is very dangerous for us.

Too bad, the North Koreans spent too much on their intelligence to focus on preventing US/Western propaganda, and counter South Korean intelligence. They didn't really have much left to breed negotiaters, diplomats, etc who can resolve this issue via invisible hand.

What we, as Malaysian citizens can do now? First, we rally behind our Country, and standd firm in supporting our Prime Minister Najib Razak's decision and action in facing North Korean's threat. We MUST NOT allow any sign or view of disagreement to reach North Korea. They must know that we Malaysians are united in protecting our country and people against their advances. Second, We pray for our fellow citizens now stuck in North Korea. We pray that they are all safe and free from any form of misfortune.

If you are an influencer, or celebrity with very loud voice in media or social media, make your support to our country's stand heard. Make them even louder. Make sure the world sees that we Malaysians are not succumbing to them, and we are united against this threat.

This is not the time to reap "popularity", because by doing so, one risks jeapordizing the whole country's interest as a whole.