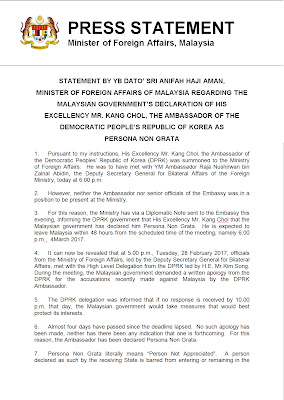 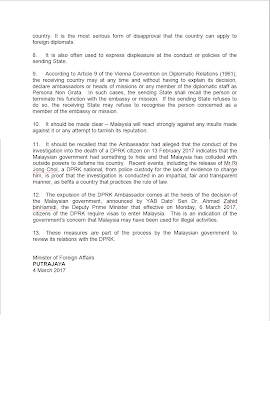 It is the same action as the gut feel of Dato Dennis Ignatius, but it is not done in a brash and harsh manner.

The Malaysian Minister of Foreign Affairs, Dato Anifah Aman officially issued a statement for the expulsion of North Korean Ambassador, Kong Choi in accordance to the Vienna Convention of Diplomatic Relations (1961).

Malaysia do not need to explain its actions.

However, Wisma Putra explained the decision to do was due to the refusal of the Ambassador to explain his disrespectful actions to accuse the police and authorities in Malaysia as in-cohoot and part of a conspiracy with other countries to wrongly accuse North Korea.

Malaysia refused to hide under the "cloak of immunity" in the rape case involving one of its Embassy staff in New Zealand few years ago.

However, North Korea applied the immunity to protect one of the several suspects and believed to be the mastermind, Ri Jong-chol of the murder.

Ri Jong-chol have been deported back and black-listed from re-entering. Upon arrival in Beijing, he made a statement to accuse Malaysia of conspiring against him and police threatening his family.

Despite police investigation found the use of VX nerve agent, North Korea has immediately denied police finding despite not allowed access to the body. They denied Jong Num died of poison and claimed the cause was heart attack.

The North Korean Ambassador tried to claim the body of the Kim Jong Num and immediately after the murder, he had attempted to steal the body from the hospital.

Police procedure only allows next of kin to reclaim the murdered body.

The presence of family member will allow police to apply DNA test to confirm the body is Jong Num.

Health Minister, Dato S Subramaniam explained that VX is a lethal nerve agent that could kill victim in a very short time. It is listed by the United Nation as a weapon of mass terrorism.

Wisma Putera issued a statement on this finding: 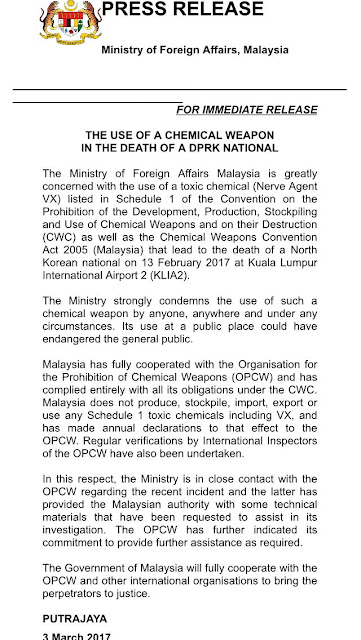 James Rubin, former US Assistant Secretary of State claimed North Korea could be selling VX to terror groups and citing countries like Syria and Iran.

US is mulling of relisting North Korea for state sponsored terrorism and Pyongpyang could face multilateral retribution.

North Korea reacted with a threat that US will "pay dearly" for its action.

In addition to the US, Britain urged Malaysia to share evidence by sending it to Hague-based Organisation for the Prohibition of Chemical Weapons and the Security Council.

There was an accusation that Malaysia had not complied with sanction against North Korea. 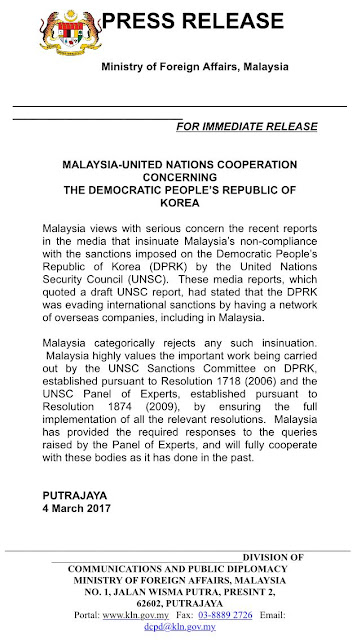 Police chief, Tan Sri Khalid bin Abu Bakar was reported in the process of striking out two North Korean companies based in Malaysia claimed by a website registered in 2009, www.glocom.com.my  believed to be involved running arm operation.

Dennis predicted the North Korean Ambassador will defect. In reaction to the rude diplomacy of the Ambassador, Dato Nazri Aziz viewed he had no choice but to act angry.

In less than 48 hours, their theory could be proven soon.

Commencing Monday, the visa free travel for North Korean will be lifted.

High Court has issued a gag orer on witnessess related to the murder of Kim Jong Num (or as the name in the passport reads, Kim Chol). A Vietnamese and an Indonesian are being charged in court.
at 3/05/2017 11:33:00 AM