Kudos to young Haffiz, but no hero to report on PH leader


Two days ago in Langkawi, a brave 28-year old government servant, Muhammad Haffiz Zarriq Bin Mat Hasim made a police report against a Deputy Minister for contempt against the lawful authority of public servant under Section 179 Act 574 of the Malaysian Penal Code.

That offense is punishable by imprisonment up to six month or fine of RM2,000 or both. Kudos to the young health officer to carry out his duty to take action against a person smoking in a no smoking zone and in a sensitive area like Langkawi airport.

When approached by the officer, the Deputy Minister's bodyguard blocked his path. The officer requested for his National Identity Card but was ignored. Eddin and his entourage arrogantly walked away.

The likelihood is Haffiz's police report would be NFA like the under the skirt skodeng by the officer of Deputy KDN Minister, Azis Jamman.

The police will be expected "to adjust". No charge was made against Eddin in court by the Attorney General Chamber (AGC).

As Deputy Minister and more so, a PPBM MP, he expect himself to be immune from any law. Where the Malay rulers are now subjected to international law, PBM Deputy Minister or any of their MPs are exempted from the Rome Statute.

It will be gross injustice but do not be surprise to see Haffiz  be reprimanded by his superior upon order from Putrajaya. Not unless the defiant smoker is Dato Lokman Nor Adam or Papagomo or Tuan Guru Dato Seri Haji Hadi Awang or anyone linked to UMNO or PAS.

For those cases, the investigation by police or MACC would be thorough, and the Attorney General Chamber would be swift to take it to court before anyone could understand what went on. 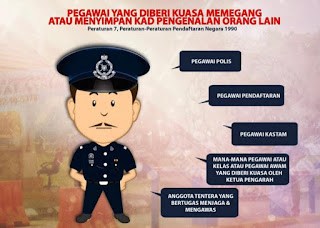 Even Haffiz's authority to request the IC could be questioned.

In the event, it is inescapable for any PH Minister from not being charged under the law, government could change or repeal the law as in the case to repeal the death penalty to bring back Sirul from Australia, and legitimate lawsuit against Rafizi by Tabung Haji withdrawn.

In government, the likes of Lim Guan Eng can get away with seditious racial remark and after a month, there is neither any signs of serious investigation nor any fear of being charged in court. 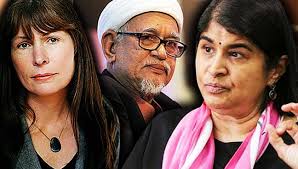 Haji Hadi was accused of receiving on behalf of PAS the amount of RM60 millon for alleged 1MDB related money from Dato Najib. The allegation was made by Dato Ambiga and pursued, promoted, and viral by London based Clare Rewcastle Brown.

MACC's Chief Commissioner, Dato Shukri Abdull told media that PAS account do not show any money trail. More so, Hadi and Clare agreed to call off their legal dispute in the UK court. But, since Hadi is not with PH and now PAS is cooperating with UMNO in the spirit of opposition unity, a wahyu from the Gods of Putrajaya had MACC continue to investigate.

Anwar Ibrahim slandered Hadi for paying off Clare the sum of RM1.4 million and continued to repeat the allegations despite being revealed it was his MCKK batchmate, Dato Rameli for a certain interest.

All will be hidden and spun to divert the truth as PH is in desperation and need to label UMNO and PAS will lead to another religious fanatic massacre as happened at Christchurch. 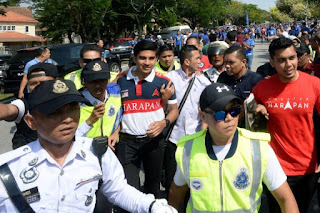 Then there is the Pemuda UMNO exco member, Muhammad Azri aka controversial blogger, Papagomo was fixed up by PPBM's Muar MP and Minister of Youth and Sports, Syed Ssaddiq on the Februry 16th nomination day of Semenyih by-election.

Police told media that Papagomo commited no offense and he was released on police bond on February 21st.

Video that viral on social media showed Papagomo ran from behind to calm the situation arising from Syed Saddiq intentionally entering the BN route to the nomination ccentre, and was howled at by BN supporters.

It is the usual fun and games and also exchanges at any local political rallies and election nomination. In fact, Papagomo merely put his hands around his shoulder in a protective manner for BN supporters to lay off.

Malaysiakini reported Papagomo telling off Syed Saddiq for doing something stupid. However, the AGC pick up on Papagomo's subjective words of "Ko bodoh" as causing insult and had him charged on March 1st. That is within 23 days of the event.

A commendable swift action by AGC, but rather questionable and petty in nature. It smells selective political persecution of the political kind. It is suspected to be a ploy to charge for any alleged offense committed by UMNO or PAS, relevant or not, and place opposition activist in financial constraint. It is copying the Bank Islam and Tabung Haji's legal game to bankrupt plaintiff.

Papagomo denied and pleaded not guilty. Case is due for mentioning on April 1st this Monday. 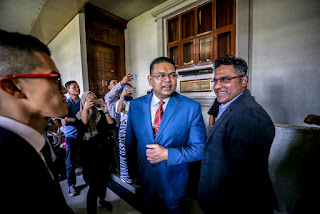 Yesterday, Dato Lokman Noor Adam was charged in court for a fracas outside the University Malaya, after Friday prayers during a Malu Apa Bossku event at a nearby restaurant with students last week.

There was a fracas at a nearby bus-stop. A video being viral on social media showed "Lokman snatched a cut-out image of Najib in clown-face from one of the demonstrators and tore it; while another supporter grabbed another student and held him in a chokehold".


Lokman and three others are being charged for the intent of causing hurt in a confrontation against 6 demonstrators of claimed to be UM students at the bus-stop. .

Surprisingly, within a week, the case that involved UMNO members could be investigated and IP submitted to AG office in 4 days and charge made out in 7 for violently confronting the so-called student. Police were able to compile 26 statements.


"Today I am the victim of Tommy Thomas' selective prosecution.

“The DAP stool who made the provocation by carrying a caricature cut-out placard of DS Najib in clown face... is not charged instead even when the Court had decided that the illustration is offensive and provocative.” 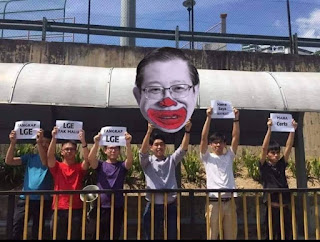 The caricature being displayed are the same one drawn by Fahmi Reza that got him charged and convicted with one month prison sentence.

He viewed the demonstrators were provocative and received reaction from students group and also the Minister of Education. 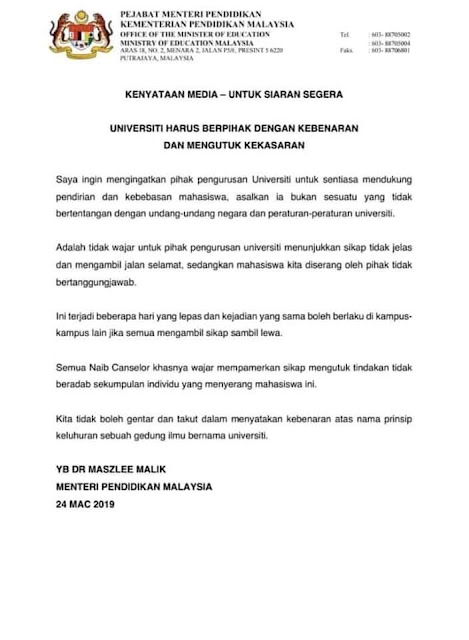 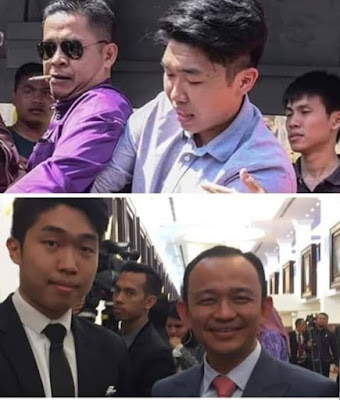 The political bias and lack of objectivity is glaring. 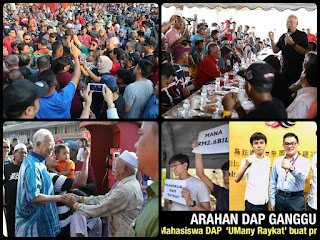 The story is the 6 students were planted by DAP to harass any event of Malu ApaBossKu to stem the rising popularity of Dato Najib. It had the insidious intention to attack Najib to make terowong Lim look good.

The leader of the group of six, Wong Yang Ke is not a student but turned out to be already working. 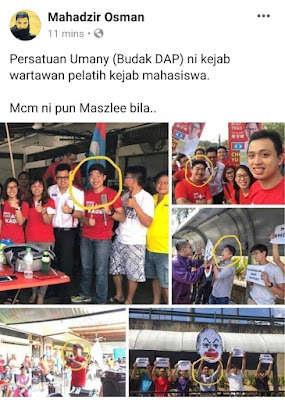 In a press conference, Wong Yang Ke showed he was not behaving in the usual student character to be victim or at least, dramatise to play victim, but showed his combative and provocative side.

He claimed it was a silent protest but the presence of megaphone shows it is not meant to be peaceful and intended to disruptive Najib's meeting with students at a restaurant outside UM campus. 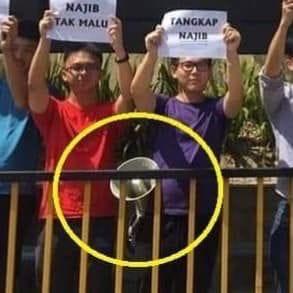 In a video circulating of him answering questions from the media, Wong displayed both the confidence and boldness to fear no threat and will take on Lokman and his supporters. It indicate Wong is a trained political operative of DAP and has the spunk and defiant character that is typical of in-house trained DAP leaders. 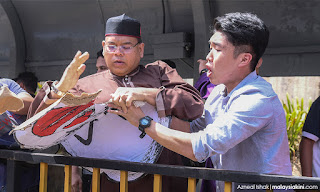 Lokman admitted to tearing the placed but claimed he confront them to protect from the wrath of pro-Najib supporters. The DAP provocateur stopped him from tearing the offensive placard. He and Najib supporters refused to apologise to the DAP planned provocation.

In another case of bad timing, Khairy used the incident to launch another personal attack on Lokman and it attracted another exchange of words. Such untimely words will not serve Khairy's personal political agenda. He is usually seen to be more comfortable to publicly criticise UMNO and his selective choices of leader, but fall short as opposition in criticising the government.

These development coincide with a video of an opposition member of Parliament from Paya Besar, Mohd Shahar Abdullah debating on the practise of rule of law in this country.


Under the PH's rule the law, Haffiz's police report will be lost in the police pile-ups but petty cases get urgency to court and on-going cases against PH leaders will be withdrawn. Case against Tokong Terowong will not get to see daylight. Neither will the case against Azmin's nephew.

In the meanwile, Najib's SRC trial will commence. He is facing two cases that will be trialed by a judge widely known in the legal circle to be Dato Gopal Sri Ram's "my boy".