What is Mahathir, Daim up to on OSA of CEP report? 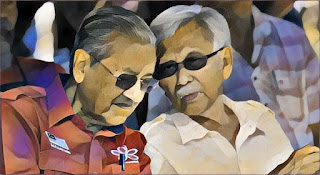 The CEP report was promised to be made public by Tun Daim when CEP was formed. By the time it was completed, Daim passed the buck to Mahathir.

From Mahathir's refusal to make it public to the announcement to make it OSA, it raise the suspicion that Mahathir and Daim is up to no good. 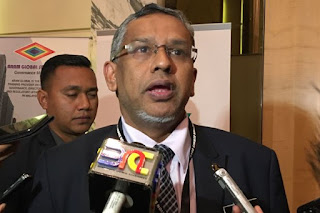 KUALA LUMPUR: The government has no intention of making the findings of the Council of Eminent Persons' (CEP) 100-day report public and has, in fact, placed it under the Official Secret Act (OSA), Parliament heard on Thursday (March 28).

"At the moment, it has only been submitted to the Prime Minister, and the government has no intention to make the findings public," he said in reply to a supplementary question from Wong Kah Woh, Pakatan's MP for Ipoh Timur, during Question Time.

Wong had asked the government whether it had any intention of releasing the CEP report findings, and to allow it to be debated in public.

Mohamed Hanipa explained that the report needed to be protected, saying that "many countries also needed it."

"Maybe some will ask why we classified it under OSA, but many other countries also needed it.

Previously, we were not totally against the OSA, but we were angry at the abuse, protecting corruption, power abuse and injustices under OSA.

"When some people raise issues involving corruption, power abuse and injustice, they were detained and charged in court under OSA.

"But now, we really want to protect the problems or confidential and sensitive information. This is the difference between us and the previous government," he said.

Many politicians and civil society groups, such as the G25 group of eminent Malays and electoral watchdog Bersih 2.0, have asked for the report to be made public.

In August, Prime Minister Tun Dr Mahathir Mohamad said CEP’s role was to investigate and inform him of their findings, and that the report might not be made public.

Mohamed Hanipa said the CEP had previously set up special teams to look into several issues, including megaprojects such as the East Coast Rail Link (ECRL) project.

"Aside from that the Institutional Reforms Committee (IRC), which was suggested by the CEP, were among the government's commitment to restore public confidence towards key public institutions," he said.

To the question of whether the government had any intention to appoint former CEP members as mentors of ministries, Mohamed Hanipa said no decisions had been made by the government.

"This is because, Insya-Allah, we are learning very fast. I would also congratulate the opposition for quickly learning the ropes of becoming an effective opposition," he said.

From the report, Hanipa Maidin seemed defensive, and his compliment of opposition indicate he is not comfortable with the decision too.

The CEP report is believed to be the "guiding principle" for cabinet members to put together policies. 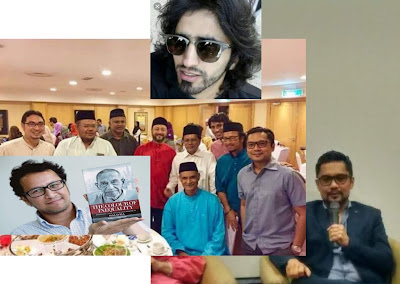 With characters like Daim's brother-in-law Dr Muhammad Khalid. Endie Shazli Dato Akbar Ali, and Faris Rabidin repeatedly seen in various supporting roles for Daim and Mahathir at PMO, CEP and also NEAC 2.0, the actions of NEAC 2.0 will be along CEP report. 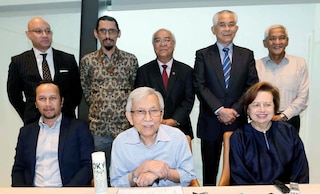 The CEP report will affect the social, economic and political life of all Malaysians and the future of the country. 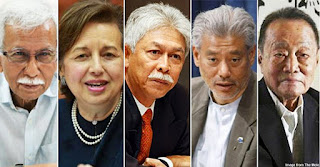 It is worrisome that the leading players of CEP are businessmen and corporate businessmen that could easily out-manouvre the macro thinking central banker and economists.

They will gainfully take advantage of the business opportunity out of the policies and actions they crafted. For instance, Robert Kuok was recently given the "monopoly" on export of Malaysian oil palm to China. 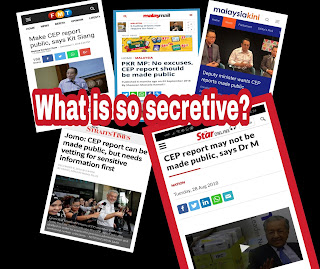 In the same note Nurul Izzah took issue with the breaking of election manifesto on transparency for PAC Chairmanship being held by a crossed over former BN, she should voice out against the secrecy and suspicious manner Mahathir is conducting the government's affair.

It is the return to opacity in the dealings of government for convenience and suspiciously the benefit of Mahathir and Daim. 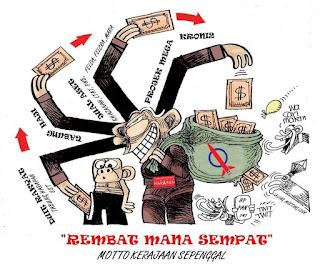 The last time the dynamic duo was running government and corporations there were rampant practises of corruption, cronyism and nepotism.

It was done under the guise of economic  recovery after a crisis and each crisis, there is loosening of policies and privatisation to so-called bring about efficiency in government services and promote Bumiputera economic agenda.

By the end of his term, Mahathir robbed back the privatised entity and few are known not being paid till today in the hundred of billion.

This time around GLCs and public trust and savings funds will likely be broken up and liquidated for cronies and families to seize on the prized jewels. There are myopic Malaysian fallen into their mind game trap.

Their target this time are likely to be Khazanah, Tabung Haji, PNB, Felda, Felcra, LTAT. and the major public companies owned by all these institutions and funds.

So much for Daim claiming there is not much to time to help Malays, and need be done in a hurry. They are robbing institutions set-up to safeguard Malay economic interest at breakneck speed before the Angel of Death come calling.

A matter of time EPF and the savings for retirements of Chinese and all Malaysians will be raided too!

The excuse to justify their actions are trumped up lies on last government's amassed debt figure, borrowings of 1MDB, Dato Najib's policies and fugitive Jho Loh.

Sensing outcome of Najib's cases in court is predetermined by fixing judges and focus on non-predicate offenses in the same manner Anwar Ibrahim was jailed for technical abuse of power than the sodomy act itself.


This video clipping exhibit Lim Guan Eng's insecurity of being exposed of the government's 1 trillion debt lie he and Tony Pua created.

This time the hands of Mahathir, Daim and collaborators would leave the country and rakyat impoverished and the government's coffer dependent on these monopolies.

MCA wants to know if DAP agrees with PKR president Anwar Ibrahim or his number two Azmin Ali regarding the direction of Pakatan Harapan's economic agenda.

Although its BN coalition partner Umno has been leveraging on racial issues, MCA vice-president Ti Lian Ker said his party backs Anwar's stand for a needs-based instead of race-based agenda.

“All progressive Malaysians must be thankful that Anwar, the designated prime minister-in-waiting, has spoken out, to set it straight that our economic agenda must be based on needs. We in MCA support Anwar on this and hope there will not be another U-turn,” he added.

Ti also questioned DAP's silence on the matter and asked if this meant the party agreed with Azmin's statement that the Harapan administration fulfils its promises on the Bumiputera agenda without fear.

According to the senator, the National Economic Policy (NEP) which was supposed to restructure society and eradicate poverty, has been a colossal failure due to its overemphasis and focus on race-based affirmative policies.

“These affirmative policies have been camouflaged, hijacked or diverted to enrich a few cronies instead of the broad poverty base that knows no racial barriers,” he added in a statement today.

Pointing to Azmin's (in photo) remarks following Harapan's defeat in the recent Semenyih by-election, Ti expressed concern that the current administration might resort to a similar race-based agenda.

“Using Harapan's loss in the recent by-elections as an excuse to return to race-based economic policies is lame and unjustifiable.

Azmin admitted CEP report not a matter of public security.

Daim and Mahathir are unable to be transparent and accountable. Their cliche reply will not hold up under public scrutiny.

The true penyamun they are.

My guess is they will release only the abridge version

It will expose Mahathir's lies

Dr M: CEP Report cannot be revealed for the time being

He said although he was aware that the government would be accused of not being transparent because of this, such stand was necessary as more time was needed before any decision could be made.

“I don’t know what it is that we can’t tell, as we have revealed almost everything, but there are some matters under consultations and we cannot reveal what we are negotiating until a decision has been reached,” he told a press conference here today.

Dr Mahathir was asked to comment on calls by various parties for the government to make the report public as it is now placed under the Official Secrets Act 1972.

Dr Mahathir also said that he was aware that some Malaysians were not bothered by the damage done by former prime minister Datuk Seri Najib Razak when the latter was in charge of the country.

He stressed that the damage done by the former Umno president was difficult for the current government to fix.

“He owed so much money, money went missing and so much more, and also undertook contracts that causes huge losses to Malaysia.

“But (when) we want to end these contracts we are forced to pay compensation to the contractors, this causes costs to rise and harms the nation’s finances,” he said.

Thus, he said, the current government could not afford to give cash handouts to the people like what Najib did.

“This is because he used stolen money. We are not kleptocrats, we are not thieves, we are not stealing money. We try to earn money as much as possible, but of course we have to reduce gradually the free gifts given by Najib,” he added. - Bernama