TH hibah in April? Anticipating or pre-planned for "bank run"


It is already mid-March and no inkling of a hibah (equivalent to Islamic dividend) announcement is forthcoming. Since the last posting, "Tabung Haji: Sins and Silliness", one source told yours truly with confidence, it will be coming in mid-March.

Since it is already the 15th, it will likely be extended to end of March. However, an equally reliable source that have been feeding unexpected development on TH claimed it will be in April.

Words circulating among bankers is TH been going around town to seek for a revolving credit (RC). Before BENARcom.my start making any accusation and personal attack, be reminded that The Star Online started it.

Getting ready money is one of three ways described in an article in the US National Public Radio portal on how to stop a bank run.

If the information is true, is TH new management anticipating a "bank run"? Why? Is there negative news for 2018 hibah for 2018?

Finally, are they actually anticipating or it has been pre-planned? 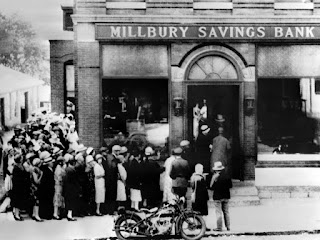 According to Investopaedia, "A bank run occurs when a large number of customers of a bank or other financial institution withdraw their deposits simultaneously over concerns of the bank's solvency.

Last week, this blogger had the pleasure of meeting an old hand and expert on Islamic banking. He asked what do we see is to happen to TH.

Our answer is the end game could be to close up the institution in a similar manner to Malaysian Airlines due to the perpetually incapable Khazanah to keep cutting cost down and reducing the capacity to generate income.

The elderly man understood immediately and agreed. He explained that the unnecessary removal of about RM20 billion of asset from the slightly more than RM70 billion portfolio together with the plan by CEO Dato Zukri Samat and Datuk Zaiton Hasan will reduce the capacity of TH.

To restructure the portfolio mix toward only fix income and risk averse investments, it will reduce return to  depositers. It is similar to cutting cost and turning MAS into low "caste" carrier.

Like MAS, TH will reduce its capacity to invest and expand its investment and economic activities. It will be losing more depositers to other fund management services like unit trust.

As originally intended by BNM at the wishes of commercial Islamic Banks, halal seeking deposits will flow to Islamic Banks.  "Bank run" will surely hasten the process. So it can be suspected as pre-planned.

The blame should go to the accounting "genius" Zaiton for colluding with Lim Guan Eng and one could speculate the reward was the Bank Pembangunan chairmanship.

A Chinese friend told yours truly that Guan Eng insist on TH to sort their own problem. He intentionally refused to let Ministry of Finance commit any assistance despite provisions in Sections 22 to 24 of the Tabung Haji Act.

Tony Pua already said Khazanah and PNB will be on cheap sale. TH short term problem is a blessing on a silver platter.

Subsequently, TH will shrink further and further like MAS to eventually be reduced to only a government agency handling Haj quota and annual operations. 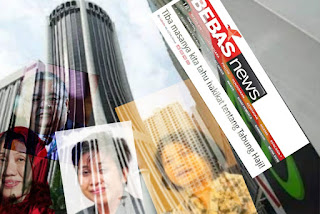 Like EPF, TH is a government instituition and not a commercial entity. It is not obligated to conform to Malaysian accounting standard MFRS 139 or since January 1st, 2018, MFRS 9 to recognise any impairment on any significant change in assets and liabilities.

EPF did not impair and Guan Eng could tipu the public that EPF did well under his Ministership.

Since 2016, BNM led by Zeti "colluded" with Rafizi Ramli, who happen to have AGC withdrew his case recently, to stem outflow of Islamic deposit from the monopoly of Islamic Banks and politicise TH using impairment as excuse.

Subsequently, the new management at instruction of new PH government played along the political blame game on previous administration and TH management. In the behaviour of liquidators like Danaharta, which masquerade as so-called turnaround specialist, they would be kitchen sinking to justify the blame.

As a result, this blog speculated in the last posting on TH that the new management was caught by their own act and end up kitchen sinking themselves by the MFRS 9.

[Do read back here to understand why TH may not meet the requirement of Section 22(3)a Tabung Haji Act 1995 on asset must exceed liability due to the impairment of the exchanged sukuk and i-RCPS].

It is speculated that TH may not have the fund to issue hibah and the sukuk and RCPS-i may not be issued yet after the asset was transfered on December 28, 2018.

Unless Zaiton could seduce the newly appointed Auditor General, Datuk Nik Azman Nik Abdul Majid to replaces the retired Tan Sri Dr Mardinah Mohamed to give them an exception from impairment, right fully TH should not be giving out hibah.

[Reporters be reminded: Show your intelligence and journalistic ability by asking them during the hibah announcement whether there was any exception given on impairment of sukuk and i-RCPS.]

After all, it is unrealistic to issue hibah at a time stock market and oil palm prices fell throughtout 2018 and 2019 to-date due to loss in confidence to the new government and the financial "genius" of Lim Guan Eng and Tony Pua.

If Zukri and Zaiton were realistic and Yati more knowledgeable, there is no reason to give out hibah and TH do need to lose RM20 billion of its asset to be exchanged with an unsecured and no guaranteed payment by ProKhas managed SPV.

TH could have been more forthcoming to their depositer and public than doing all this senseless and silly financial manouvre to then shot their own feet and try to please the public with promises of hibah and sustaining subsidy (but dishonestly had actually withdrawing).

Public will be angry but they could be reason with honesty and sincerity. The way Mujahid, Zukri,  Zaiton and Yati is doing will only raise suspicion and god forbid, result in "bank run".
at 3/15/2019 11:48:00 AM