The above is the segment of Dato Mohamed Hasan speech that DAP is trying hard to get public attention.

It was to counter the public uproar against war declaration against non-Malay statement made by Lim Guan Eng and equating UMNO-PAS cooperation to white nationalist terrorist in the New Zealand mosque massacre statement by Mengkibol, Johor state assemblyman, Johnson Chew Chong Sin.

This posting is neither going to highlight the new DAP propaganda to make accusation and immediately pull back, amend, apologise or deny by claiming handphone hacked.

Nor will it dwell on Guan Eng's attempt to divert from the Penang tunnel heat or pretentious rebuke of DAP against Guan Eng's replacement of Boo Cheng Hau's protege or Nga Kor Meng abuse of power as Deputy Speaker of Dewan Rakyat to expel Tan Sri Noh Omar for questioning his statement to call UMNO and PAS as Taliban.

It is about Tok Mat as he is comfortable referred to in the UMNO circle.

Within UMNO, there is this premature expectation that Tok Mat should be elevated from acting to permanent UMNO President. Dato Dr Ahmad Zahid Hamidi should not end his leave though it is high time he do so.

The expectation of Tok Mat has reached unrealistic height to assume him as saviour to take UMNO out from the current rut. More frightening, the commonly heard reason is, believe it or not, "Dia pandai cakap" (He can speak well). Indeed, Mat Hasan has an entertaining way with words.

Whether using common anecdotes, or Malay pepatah and pantun, he has his unique delivery in communicating or evading hard questions in speeches or Q&A from press and in forum or delivery of press statement.

However, Mat Hasan is quite the typical Negeri Sembilan-ders with their rich oral tradition from their unique rhyming accent, Minangkabau root, and Pepatih matrilineal custom. 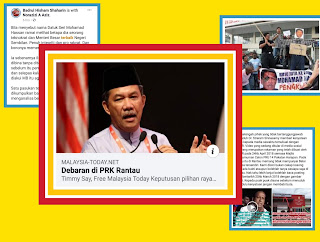 Coming from Negeri Sembilan, Mat Hasan does not have the political competitive edge. He is a former MB of a smallish Negeri Sembilan state and former UMNO Liaison State Chief to only 7 UMNO divisions. Even that, it is a disunited lot.

Mat Hasan could not gain the full support. After two terms, he could only stop the factions from an all out war. No leader of Negeri Sembilan could ever control the warring Kuala Pilah tribes.

With a looming by-election, it is not timely to be frank. But it need be done to dampen risky unrealistic expectation.

Frankly, Mat Hasan is relatively novice at national level politics. He may have escaped the brunt faced by Dato Seri Dr Khir Toyo but the fact remain that like Khir, he lost his state. The difference being BN lost almost everything.

UMNO leaders seldom praise its delegates as having the maturity and wisdom in making their choice for party leadership. The reality is UMNO delegates kept the corrupt and glaringly today, treasonist Tun Dr Mahathir for 22 years.

And, the psyche of the UMNO masses can be petty in their choice of issues, shallow in the analysis,  reasoning and narrative, and limited in their memory, horizon and consistency.

Last year, few UMNO leaders and vocal segment of UMNO members expressed their disapproval to the presence of Dato Najib to campaign at the early by-elections in both Sg Kandis and Seri Setia, Selangor. Najib was accused as corrupt and should be responsible for 1MDB as the cause of UMNO's fall. He was a turn off to voters.

Following the successful Malu Apa BossKu campaign, the same critics wants to be seen with. Khairy defended his presence in Semenyih. Even Dato Khaled Nordin requested selfie after the Semenyih victory. Talk for Najib's comeback as PM or return to UMNO as Ketua Umum is beginning to make its round.

Same with the resistance for the return of Zahid as the legitimately elected President. The argument is he is facing corrupt charges. But is Najib not facing charges? Perhaps, the ensuing argument is Zahid has more and is more likely to stick than Najib's.

Off course, one can ask why and the exchanges will turn speculative than having any sound and factual reasoning.

Returning back to Mat Hasan, Badrul Hisham Shahrin @ CheguBard is back in his element following the announced date for Rantau by-election.

Chegubard has an old score from his past defeat to Mat Hasan at the GE13. He has came out blazing with accusation of past RM10 million money laundering and attempt to buy him out from running at Rantau. Proof and evidence is still needed, so does the case with Najib and Zahid whose court trial is yet at full blast.

The by-election is not significant to topple DAP-strong PH in Negeri Sembilan but it is a big political test for Mat Hasan. Failing which, conspiracy mind claimed Khairy get to keep his Rembau seat and Zahid could return.

With 53% Malay and a political narrative of PH has turned racial to attack the UMNO-PAS dream team of the Malays, it could be tough for the popular son-of-Rantau to maintain his vote from non-Malay constituent he served well in the past. 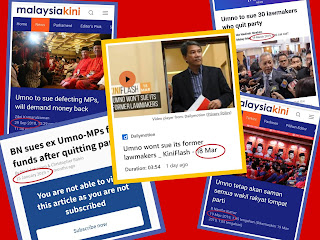 Mat Hasan was a former CEO in the late Tan Sri Basir Ahmad controlled company, Cycle & Carriage Berhad and former bank manager at Bank Bumiputera. That money minded calculative corporate thinking may still remain in his psyche which is not suitable for politics.

The report by The Malaysian Insider and reproduced by MSN News is reflective of that flaw in Mat Hasan's corporate-like political thinking:


Former ruling party Umno will not be following through with their earlier claim that they will be suing lawmakers who defected from the party after winning under the BN flag in GE14. According to a source quoted by The Malaysian Insight, the cost of proceeding with legal action is the main factor and that the acting Umno president Mohamad Hasan felt that it is more important for the party to focus on strengthening and restructuring the party.

Mat Hasan cannot indiscriminately over-ride a decision without consultation with UMNO's Supreme Council. In September 2018, elected President, Zahid announced this Supreme Council decision and told Malaysiakini summonses had been given out.

There is a legally legitimate expectation to do so. UMNO is claiming back cost and demand them to vacate the seat. The demand may be more political but lawsuit has strong legal basis and could be a case precedent.

The lawsuit cannot be seen stricty from the viewpoint of money as it can be arranged with lawyers. It is about party's "face" and honour. Mahathir had committed to say he did not want them and his fellow PH component parties are against taking former UMNO MPs.

Since December, nine of 10 UMNO state assemblymen and 4 of 5 MPs left the party with Masidi and 100 UMNO Sabah leaders resigned enbloc. Now that eight former UMNO Sabah leaders - 4 MPs, 2 Senators and 2 ADUNs - have joined PPBM, it is an insult to UMNO not to sue them.

UMNO can continue with its party consolidation but the lawsuit should not be witheld. It is a gross political miscalculation on Mat Hasan part.

Annuar Musa has reiterated for the lawsuit must continue. A sum of RM10 million will sufficiently deter any aspiring frogs. Those unfazed 30 lawmakers should be made to pay or suffer the financial consequence for betraying both the party and voters!

Where DAP and PKR could only threaten but dare not, UMNO could now put action into words and to end the betrayals of voters by the act of crossing over after the general election. 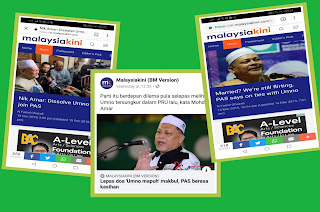 Another grave mistake of Mat Hasan was to impatiently claim UMNO and PAS has gone into marriage. After his meeting with PAS Deputy President, Tuan Ibrahim Tuan Man, he described the meeting as a kenduri to celebrate the solemnisation of the marriage.

Earlier in December, it was Nik Amar who said UMNO should dissolve and join PAS. It was a clear message that what is happening at the top may not be what is accepted at the grassroot yet. Cameron Highlands and Semenyih is not similar to northern Malay states.

Mat Hasan should be able to read deeply between the line in Haji Hadi's statement to express support for Mahathir in the event of vote of no confidence.

It was not a statement to support Mahathir per se. PAS has yet to submit the Statutory Declaration of support in the format Mahathir provided to Hadi. In a statement, Nik Amar snubbed PPBM and gave room for UMNO and PAS cooperation.

Hadi's statement was to foil DAP's attempt to fully control government. It made Anwar furious, but Nik Amar douse his anger with the reply PAS do not aspire to be PM. PAS was sending the message to Anwar to reconsider his position with DAP.

It is the same position taken by UMNO, but Mat Hasan was not careful in his words and got spinned  as UMNO will support Mahathir by mainstream media. According to a member of UMNO's Supreme Council, there was no decision made.

If that is not enough an oversight, Mat Hasan went on to prematurely announced UMNO and PAS will form coalition government in four states of Kedah, Kelantan, Terengganu and Pahang.

Dato Mukhriz Mahathir sarcastic reaction was to congratulate UMNO for giving PAS the MB-ship of Kedah. It was to infuriate the UMNO supporters. With majority Malay's acceptance to the cooperation, it is not the best of sarcasm. Mukhriz's Jerlun is one of the targeted 30 to fall.

To the staunch PAS grassroot, the news of a coalition is not necessarily good yet.

PAS have been involved with more political coalitions than UMNO in the past. They are more experienced in the tumbles of coalition politics. Their members are guarded to any possibility that could compromise their Islamic agenda.

Again, Nik Amar had to correct matter. He said in the manner to appeal to PAS grassroot pride. "We used to pray for UMNO downfall, now we pity them".

To counterbalance the rather demeaning words of UMNO, Nik Amar said, "Umno is still the opposition (in Kelantan) and we (PAS) are the government. Bersatu (Parti Pribumi Bersatu Malaysia) which is represented by its Ayer Lanas assemblyman, Datuk Seri Mustapa Mohamed, is also the opposition. We don’t have a coalition government here.

"Only maybe Umno will be a state government-friendly Opposition. It can happen...we hope so but it is up to them (Umno)."

It is a loaded answer that explains the battlefield terrain to convince both side of supporters for a cooperation in Kelantan. Something the senior and experienced UMNO politicians would not have missed out, except those in their own world like Hishamuddin, Nazri Aziz and Khairy.

For Mat Hasan, it serve as a reminder before he moves up to greater heights.

For UMNO members, it is a reminder that at this moment of crisis, we need every able bodied persons and talents available, and certainly not the time to pit one against another. It is time to look at the strength and weakness of all leaders to be jelled and supported into a strong team.

Why would PAS share Kelantan with UMNO when they can hold Kelantan on their own.

The typical N9 bloke he is. Mat Hasan maybe taking lightly a lot of matter. The tariqat dominated N9 may not tally with PAS emphasis to uphold Islamic syariat.