After almost reaching a year as Minister of Finance, and two terms of close observation as Penang Chief Minister, it is sufficient to not believe the words of Lim Guan Eng.

Guan Eng argued he is innocent of Penang tunnel because former MP of Temerloh from PAS, Nasaruddin Hasan apologise for raising the issue in 2016. Since he claimed Penang tunnel linked projects is based on open tender, he expect us to believe him.

It is easy to spot Guan Eng is lying. Very easy...

One is when he argue incessantly, be it by out shouting or doing turn the table counter argument. That is him not answering the question as in the issue on the sales of Malaysia's Hong Kong Consulate!

Another is when he shows his anger as in the above video circulating in social media. It could be him caught trying to flick almost RM800 million from sale of the Consulate! 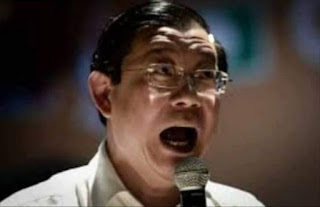 When anyone become angry, Malaysians tend to try to calm things down and not to flame it further. So they refrain from pursuing the issue further.

Guan Eng learned this from DAP patriach, Lim Kit Siang as a ploy to not be confronted by issues. Thats why reporters are afraid of this schoolboy wimp. 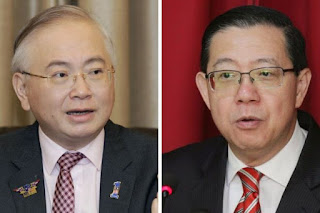 The MCA president said the property had been evaluated by industry players in Hong Kong, who valued it at HK$1.6bil (RM832,300) and not RM1.6bil, which Lim had disclosed in the Dewan previously.

"The offer was for HK$1.6bil, don't try to equate our currency with Hong Kong dollars.

He is definitely caught.

Now that Gnarajah is in court, heard P Ramasamy, Chow Koon Yeow, Phee Boon Pah and many more will be summoned as witness.

Guan Eng will be more argumentative and exhibit his anger as defense mechanism. However, others can express anger too.


This FB posting tells what was happening: 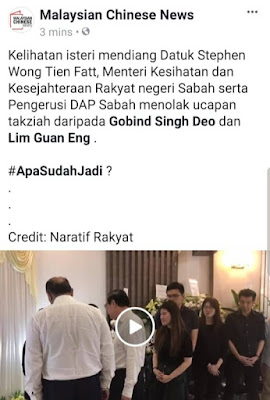 But it does not tell why it is happening.

He was basically telling him that as Minister.of Finance, he must ensure to fulfill it. Otherwise, DAP is gone in Sabah and Sarawak.

Guan Eng reply was really an insult to anyone intelligence. He said. "How to pay Jho Loh took all the money?"

Guan Eng was telling the late Stephen to spin that story because he was not going to pay those money.

It didn't matter that DAP and PKR made a Kuching Declaration for GE13 to not only adhere to MA63 but promised 50% sharing of tax raised from Sabah and Sarawak, more than the 40% stipulated for Sabah only in MA63 and Constitution.

He failed to emphatise and in his usual self, to be sensitive to others. Sandakan by-election should be interesting. But, who will stand against DAP? 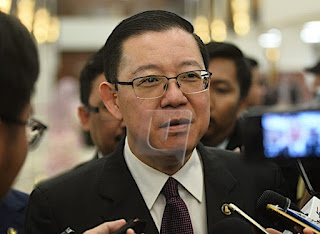 The interesting story found this morning from Utusan Malaysia is Guan Eng claming his target of attack.

Why not when he messed the economy by announcing removal of GST system before cabinet made a decision?

The plan was to zero-rise GST, but retain the system as it is useful to stem black money in the system.

When Guan Eng announced. Cabinet had no choice but accept to save face for new government. Many cabinet decisions were refused to be implementsd by Guan Eng on advise by the devilish adviser, Tony Pua!

By the way, playing victim is one indication Guan Eng is lying. He is a heartless oppresor and never victim.

Its another of this untrustworthy character's defense mechanism.