AG manouvered for LTTE suspect out on bail


The opposition media had a field day making questions of Attorney General, Tan Sri Tommy Thomas during the cross-examination of Dato Najib at the SRC trial the butt of their jokes.

Najib insisted to deliver his testimony in the National language, Malay and Tommy, known to be inadequate in his Malay, struggled to form questions from Najib's 233 pages testimony.

Tommy asked why Najib did not intervene to resolve problems within the MOF company, SRC and was snapped back for not knowing the law that it is the responsibility of the Board of Directors. Tommy admitted not yet establish the solvency status of SRC, but insisted on Najib to admit it is bankrupt.

The biggest laugh was his question on which side Najib took in the fight for UMNO Presidency between Tun Dr Mahathir vs Tengku Tan Sri Razaleigh Hamzah in 1986.

Tommy had to throw the towel to ask judge Dato Nazlan Ghazali for 6 days postphonement to study the testimony. The stand-up comedy session will resume Wednesday.

But, his decision yesterday to not appeal against the same Nazlan's decision to allow bail to Gadek assemblyman Saminathan for terrorism-related SOSMA offenses is a serious matter.

Law enforcement officers and legal practitioners conversant on security matter are up in arms. They are screaming, "Is the security of the country to be compromised to this over indulgence on righteousness of the  constitution and human rights?!"

The public is already angry that the charges related to possession of LTTE materials is withdrawn. Yet a Muslim woman is facing 5 years imprisonment for possession of ISIS materials. 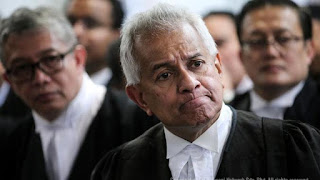 To quote from FMT:


In a statement today, Thomas said Parliament and those who drafted Sosma did not take into account that the judicial function of the courts is eroded by virtue of Section 13 in that law.

He said the constitutional law has made substantial advances since Sosma was enacted, and the Federal Court decisions in Indira Gandhi in 2016 and Semenyih Jaya in 2017 accepted the basic structure doctrine.

More significant, he said, is the fundamental entrenched principle of highest importance, namely the constitutional duty of the courts to judicially decide disputes, including contested bail applications.

The statement in full below: 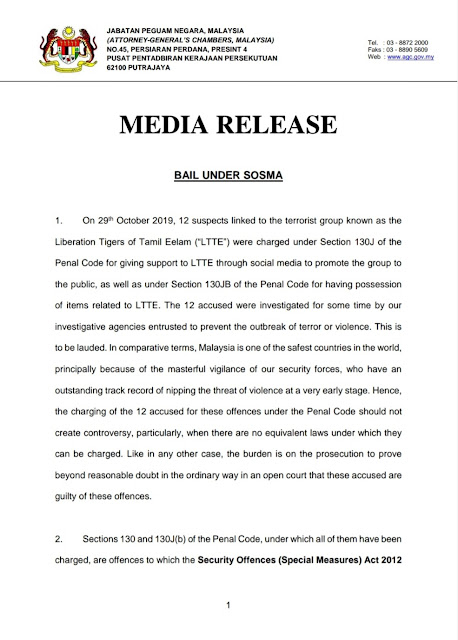 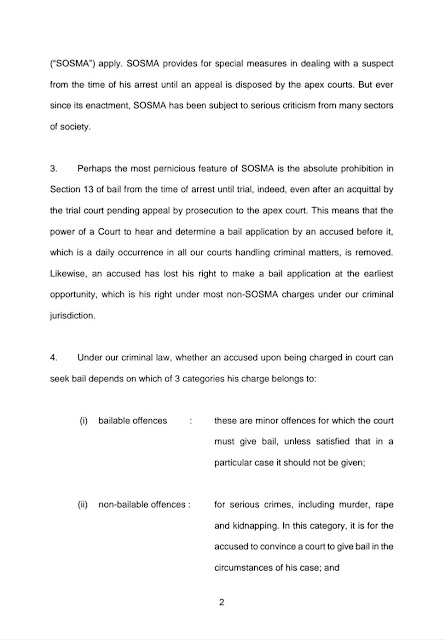 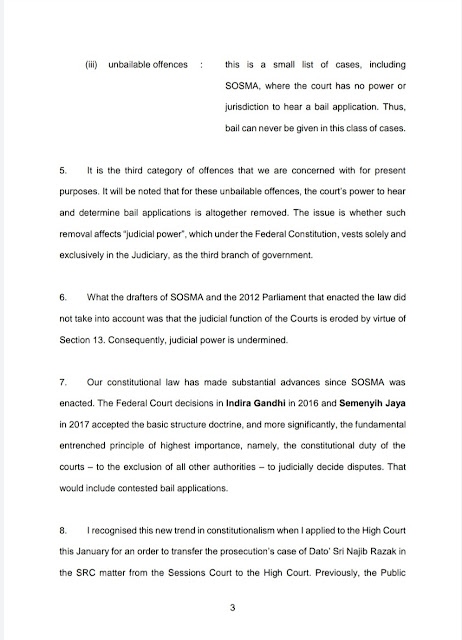 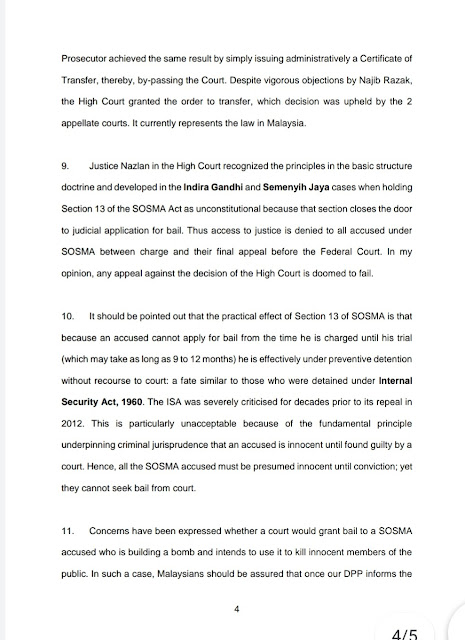 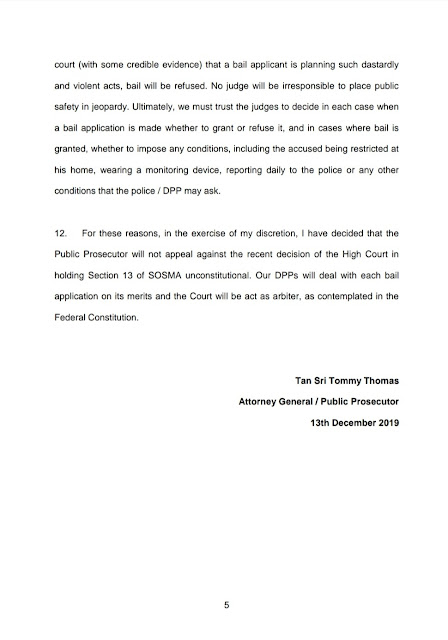 The legal basis for Tommy to not appeal is the ouster clause. Wikipedia here described it as follows:


An ouster clause or privative clause is, in countries with common law legal systems, a clause or provision included in a piece of legislation by a legislative body to exclude judicial review of acts and decisions of the executive by stripping the courts of their supervisory judicial function.

Without such preventive law, it will make law enforcement difficult and put the security of the public and country at risk. In a matter of time, the country will be controlled by gangsters and terrorists.

Only then will lawmakers and human rights appreciate the need for pragmatic application of the law to maintain public safety and order instead of pandering to idealism on the supremacy of constitution, human rights and purity of the law above living realities.

Notice Gopal's "my boy", Nazlan making the judgement in accordance to Gopal's view.

In June this year, several lawyers call for removal of ouster clauses as it removes judges power. Law on immigration, and Societies Act were mentioned.

Ultimately, the power of Ministers, and civil servants will be removed. Power of Parliament will be superceded. The country will be governed by lawyers and judges. All at the expense of efficiencies, effectiveness and also good governance.

According to a legal practitioner, the Semenyih case refers to court decision to override the power of the land accessor but in his word, it as much as the court could review as it is limited in administrative actions.

However, the spirit of the case should be taken into consideration and not an across the board application as done by Tommy.

The argument against ouster clauses in security law such as SOSMA and POCA should be considered as ultra vires as it is necessary to keep the public from harm's way, maintain safety and uphold national sovereignty.

National security should not be compromised to lawyers and judges' wet dream for the utopian justice. The outlaws could not care less for fairness and law.

At times, the interest of the masses have to override the rights of individual, more so that of criminals, drug warlords, smugglers, underworld gangsters and terrorists. 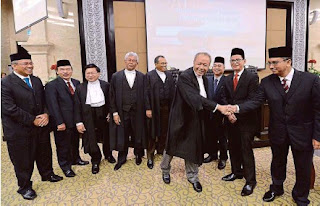 Nazlan, who also preside over the SRC case, is a judge that had it easy. He may not realise the graveness of his decision.

He came from a middle class family and his path up was smooth. Smart and clever as he is, he rose up as a corporate lawyer to join Securities Commission and eventually landed himself on the bench.

However, Nazlan is not exposed to the ground reality of law enforcement and the world of crime, syndicates, terrorism and the unsavory side. He is living in a white castle of his corporate life and its heartless side.

The principle he wish to pursue is but the pin-up mode of a corporate lawyer. Criminal law should be grounded on reality and pragmatism.

As far as Tommy, it is increasingly obvious that anything to do with DAP and unavoidably need to mention, Indians, he will go out of harms way to save them from the long arms of the law.

It does not matter to Tommy that they are corrupt public officials, communist, murderers, terrorists and criminals. His is more interested to find a way to get around the law than enforce it.

All this may be true if our polis indeed do their job in the spirit of policing work as it was meant to be. However, in recent cases the Polis had conducted themselves more of a lackey to the politicians to create diversionary issues when there were done.

What is being said about the police by the previous opposition is now a reality of the present government which seem drunk by the power that they have in their hands.

(“Judges took the oath to uphold the Constitution. Yet, here they discarded the clear provision of the Constitution and adopted the judgment of the Indian Supreme Court which had been rejected by two judgments of our Federal Court and had stood as law of this country for over thirty years, to decide contrary to the constitutional provision. It is their judgment which is unconstitutional. It is they who had encroached the jurisdiction of Parliament, not vice versa.”)

(“In this case, the learned Judge appears to rely on the principle of separation of powers that it is the court that decides whether bail should be granted or not and since that power is removed from the court that law is (SOSMA) unconstitutional. In the first place, bail and the types of offences bail may be given or not by the courts are provided by federal law. The courts obtain their jurisdiction regarding bail from federal law, in particular the Criminal Procedure Code. How then could it be argued that by removing the courts’ power to hear and determine bail applications in respect of a particular type of offences, Parliament has encroached on the jurisdiction on the courts? It was Parliament that gave that jurisdiction and power to the courts.”)