Will Anwar dare to expel Azmin?

The basis was abuse of power by disciplinary board to take the extreme action of sacking senior MPP leader Zakaria Abdul Hamid, aligned to Dato Seri Azmin Ali on only suspicion of graft. MACC did the unusual to formally inform PKR leadership of graft investigation on the MPP leaders.

Subsequently, the central commitee made a decision to reinstate Zakaria and another youth leader with two third members voted in support of Azmin.

Following the decision, Azmin demanded apology from Anwar which he refused. Azmin has upped his move to plan for a parallel congress on the same day as PKR is holding its annual congress from 5th to 8th December, almost same time as UMNO Annual General Assembly from 4th to 7th.

Its a slight change to the original plan to boycot the congress.


Another reason for the vote of no confidence was the threat to dismiss Azmin and Woman Chief Zuraidah Kamaruddin.

The fued that reached boiling point as the congress looms near is now seen will cost Anwar his chance for premiership. Will Anwar dare to the risk of expeling Azmin out of PKR?

Frankly, if Anwar is rational and thorough in his thinking, he should not be consumed by anger and hatred coupled with his overzealousness to make the move against Tun Dr Mahathir after the disastrous PH showing at Tg Piai.

Anwar is under immense pressure to expel Azmin, but doing so could put PKR in trouble and even break it apart.

As it is, PKR is known to be late in holding its congress some years back and it could be the issue ROS could pick on.

Azmin had been running the show in PKR during the time Anwar was inside and Datin Seri Wan Aizah was President. He may know and have evidences to cause PKR to be suspended. 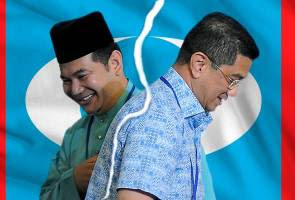 It is normal for MACC to inform government department, agencies or even GLCs of any invetigation involving their organisation, but not to a political party.

No regret was expressed by MACC for prematurely compounding UMNO leaders and GLC linked to alleged 1MDB fund and yet no suit filed in court. And no regret made on abuse of power to excessively applied AMLA to freeze monies beyond the amount suspected of money laundering.

Despite admitting the mistake, MACC action made them suspect for imploding the Anwar-Azmin tension to blow-up.

In response to the accusation, Azmin may divulge Rafizi's money game to buy voters, particularly the game by Anwar's financier, Dato Sng Chee Wah to load up Julau PKR election with 11,000 voters. 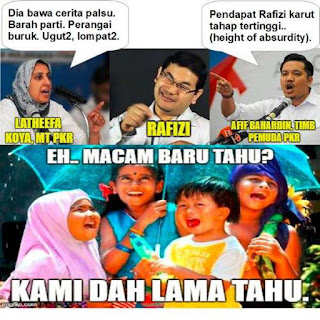 Anwar should be reminded as to whom Latheefa Loya is aligned to in PKR before she quit to take up the MACC Chief Commissioner post.

It is no coincidence that there is a report made against Anwar by PKR Branch Chief for unexplained wealth.

If Mahathir is considering threatening to close up UMNO using the basis of illegal money to fund party activities, the ROS Registrar could do one on PKR first before moving on UMNO.


Anwar is the immediate threat to Mahathir and after Tg Piai, the old man is on Defcon 5 status.

It was Anwar that asked Azmin to explain himself for meeting BN and PKR MPs at his home the Monday after the collossol loss.

In late October, Anwar openly brushed off Azmin for supporting Mahathir to stay for the full term. He even alluded those negotiating with the enemy. And he said the Prime Ministership will be determined by the PH Presidential Council. Azmin did the same after Tg Piai.

The tension between them have been waiting for the moment to implode.

Azmin and Mahathir have been planning this since their first meeting in London in late 2014. It was April 2015 that Mahathir met a group of senior bloggers seeking for support to oust Dato Najib.

The feud between Anwar and Azmin went back to the bitterness after the party's last election in which Awnar was backing Rafizi. Attempt to extend an olive branch failed.

Thought is it naive of NSTP to ask: Is the Anwar-Azmi infighting worth it?

Maybe that it the only angle the editorial bosses could see to pretend not to be bias and Tun Daim to hedge his bet.

Anwar made the mistake of being obsessed with MP numbers that he forgotten to protect his plank from counterattack on his base.

Talk have long been strife that he has left a bit too many semburit videos around and when exposed, it could overshadow Azmin's Sandakan semburit.

But will Mahathir's old ploy still have any impact these days?

Anwar should ponder now. Which is more important; the MPs or the party?

That he could learn a thing or two from Dato Ahmad Zahid Hamidi on strategic retreat. But Anwar loathed being seen as weak.

Perhaps he does not mind being seen as strong but stupid.

Looks like Azmoin is making a headway against Anwar.