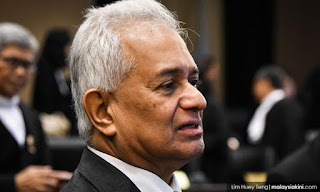 When it takes the joke of opposition social media to speak for Tommy, it means he is in the wrong. His excuse that he of not being told is not good enough.

More so, it is revealed that he was to withdraw the appeal and reprimand the officer upon being told by EC Chairman.

Art Harun has since denied. Yeah,  sure...

Tommy is being openly questioned. Given time, he could be facing the brunt of the law.

Former AG and Federal Court judge, Tan Sri Appandi Ali said it is the practise at the AG office to automatically appeal for criminal cases.

The AGC practise is to only charge criminal cases based on chances of winning of more than 95%, whatever it means.

It is fair for them to appeal.

More do, it is to the public interest to appeal the acquital of Rafizi for its serious implication on BAFIA.

Rafizi breached banking confidentiality rule. His expose of NFC issue did not end with cases won by the government. Dato Dr Salleh Ismail, husband of Tan Sri Shahrizat was acquited.

If Rafizi is allowed scot free and unopposed by AG, it will have serious implication on the public and international confidence on our banking system.

The legal principle to free him must be air tight and unquestionable. Otherwise, our banking sysyem will be facing serious ramigication from this politically skewed decision.

This decision could also put Tommy in trouble in the near or even far in the future, few years down the road.

It relate to the recent landmark Federal Court judgement that Dato Najib could be sued for malfeasance.

The authority and discretion of Tommy to determining whether cases are to be charged or sued, or withdrawn or appealed is clearly stated under the Federal Constitution.

It means there is no need to establish his line of responsibility.

According to an Indian legal website, malfeasance can be summarised as below:

Thanks to Tony Pua, he could be charged or sued by the banks for malfeasance upon expiry of his contract as AG next year. Pressure is building up for him to be removed.

The malfeasance precedent could be used by many parties to sue government or politicians for any serious problems arising from their decision, including security issues.

Recently, it is heard of a PKR leader close to Dato Seri Anwar Ibrahim and political officer of an embassy foreign in Kuala Lumpur talking and preparing for the possibility PH government is as per the commonly used hashtag #KerajaanSepenggal.

Whichever come first, his contract expire or new government comes in - be it frontal or backdoor way - Tommy could be facing retribution for his abuses of power.

The most glaring was to withdrew Lim Guan Eng's bungalow case midstream after the GE14. Many more actions of Tommy have been viewed as abuse of power and indifference on the enforcement of law.

When appointed as AG then, Tommy made it known that he is the AG appointed by the PH government.

It is said he had distributed to the legal personnel of AGC the manifesto of the PH government as a reminder to that any legal action should be in accordnace with the manifesto instead of the law or precedent practises.

A message has been making its round on social media and WA groups:

Filing a notice of appeal against order of acquittal by High Court after DPP successfully obtained a conviction at the trial court is an automatic action/ policy in your Chambers for ALL criminal cases prosecuted in this country.

The rationale behind this action by the DPPs in your Appellate & Trial Division is to get a full understanding by studying the written grounds of judgment by the learned High Court Judge in coming to His/Her decision. (Only when you file a Notice of Appeal, a written ground of judgment will be provided by the High Court)

After studying the grounds of judgment, your learned alter ego (i.e. the Deputy Public Prosecutors, under the power given in Article 145 of Federal Constitution), may in their constitutional discretion, exercise their power to file a Petition of Appeal if they see any error of facts or law in the judgment.

If they dont see any merit to proceed with the appeal after studying the written grounds of judgment, they can opt for not filing any Petition within the stipulated time and the appeal will be dismissed automatically.

Now, unless you as the Public Prosecutor has given specific instruction to your Head of Appellate & Trial Division not to file any notice of appeal in Rafizi's acquittal by the High Court, and doesn't bother to find out what was the legal justification of such acquittal, your DPP should not be taken to task for doing his/ her job according to your Chambers' policy.

Your press statement of denying knowledge of the action of your Deputies in filing the Notice of Appeal, and promising to take stern action against your very officer for doing his job, is a major embarrasment to the Malaysian public and the legal fraternity of your impartialness and competency in conducting your duty as the Public Prosecutor of this country.

It is very dissappointing to see Rafizi issuing public threat in his press statement to you by saying it is his hard work that puts you into your current position and filing a notice of appeal against his acquittal should not be the way you're showing gratitude.

DAP's head of legal bureau, Ramkarpal Singh, even dare to instruct you as the Malaysian Public Prosecutor and Attorney General to deliver your promise to withdraw the notice by Monday. He also advised Rafizi's legal team to apply to strike out the notice in the event you failed to deliver on your promise (which makes me wonder how do one apply to strike out a notice of appeal by DPP)

Your immature reaction to the threats and criticism by some PH politicians and supporters by shifting the blame to your deputies, with allegation of sabotage and deep state are greatly regretted.

It is high time the office of Attorney General and Public Prosecutor be separated to avoid conflict of interest and abuse of power.

MALAYSIA needs a just, fair and impartial Public Prosecutor, who upholds the rule of law and protect the integrity of his institution.

May God bless you.