More than just a by-election in Kimanis 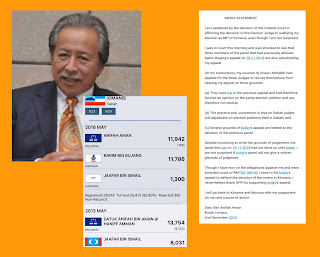 Who would have guess that Dato Seri Anifah Aman, the younger of the influential and powerful Aman brothers controlling Sabah politics, would lose his Kimanis seat?

Dubbed as the best Foreign Minister post-Tun Ghazali Shafie, had he not come from Sabah, Anifah would have been a potential PM.

With more than 5,000 majority for GE13, his majority was reduced to a mere 500 majority at the last GE14 and the seat taken away on mere legal technicality.

Prior to GE14, something strange was already happening.

Anifah's returns to his constituency were not met with requests and demands, usually includes ridiculous ones like seeking money to take another wife.

During campaign, only did Anifah realised his Wanita UMNO wing could have been bought over by the Warisan side.

It is all under the bridge now.

Maybe, it could be Anifah's curtain call. Known to insist any decisions and actions made should be based on justifiable reasons and careful considerations, it is not Anifah to justify this belligerent travesty of the law and abuse of the democratic practise with a response.

He might not "defend" the seat as it means acknowledging the court decision and abuse of election law.

EC failed to sign on one of the vote tabulation form. This is despite the forms verifying the vote count for each voting district are in order.

It is believed that a recount would have handed Anifah a larger majority as there were suspicion something funny was going on within EC.

Now that the people made their decision, there were more funny stuff happening at the election petition court.

The sames judges that made the decision during the failed appeal refuse to recuse themselves. Sabah judges adjudicating election petition in Sabah.

Many issues were missing, including the final appeal date and decision were made without a written judgement prepared. 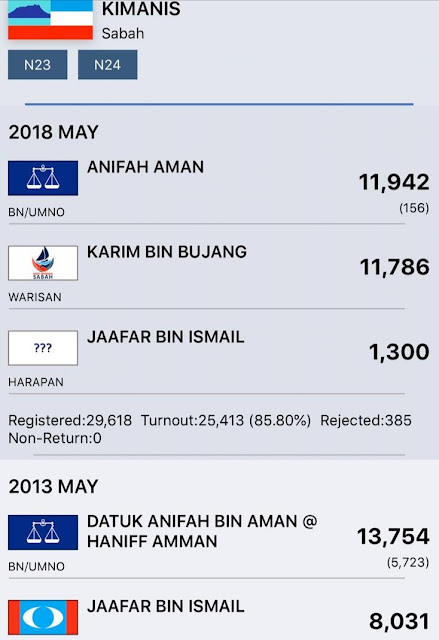 Having quit UMNO after winning the election but BN losing both Sabah state government and Federal governments, it is difficult for him to re-run under UMNO or direct BN ticket.

Anifah still wield much respect and influence within UMNO Kimanis and Sabah that they prefer not to run should he intend to run. However, party discipline will require UMNO Kimanis and its member to only support UMNO or BN/Muafakat Nasional endorsed candidate.

Anifah have been courted by both PPBM and PKR to run under their ticket. But it will not be consistent with his stand to quit UMNO for non-delivery of promises on the Malaysia Agreement 1963. To Sabahans today, both are accomplice.

Dato Najib could not announce the 40% revenue sharing rights for Sabah already stated in the Federal Constitution. The country just could not afford.

Be it UMNO or PPBM or PKR, all will be deemed to have failed to honour Sabah's rights in MA63 and inscribed in the Federal Constitution.

Picking between UMNO or PPBM will put Anifah in a dilemma. The elder brother, Tan Sri Musa Aman remained in UMNO, but his son and men migrated to PPBM.

Warisan too is heard to make overtures, and their crying call will be Sabah right. It will make it more difficult for Anifah to run on any Peninsular-based parties.

More so, it will not be easy to join the party that resorted to bribing and underhanded ways to beat him.

Maybe it is more enjoyable for Anifah to stay out and watch PPBM slug it out with Warisan.

PPBM need to raise their seat count in Parliament. They entered Sabah on the suspicion Dato Shafie Apdal was playing footsie with Dato Seri Anwar Ibrahim.

Warisan will insist it is their's to run. Sabah sentiment will come into play.

An interesting angle to this lies with Anifah's lawyer and major faction leader within PKR Sabah, Ansari Abdullah.

His faction is daid to have four PKR MPs, who has family link to him. Ansari is said to be furious with the court decision and may stage a protest to this travesty of justice.

EC have been closing a blind eye to infringements done by PH during by-elections with excuses on law interpretations and scope of power.

If the idealistic Ansari take up issue to protest, the four MPs could follow suit to protest against Mahathir, who is accused for deliberately abusing the law for political interest.

It would mean four less MPs for Dato Seri Azmin to deny Anwar's ascension to Prime Ministership. Four less for Mahathir too!

The Kimanis by-election certainly have implication on national politics with regard to the power transition to Anwar.

More important, the Kimanis by-election will be another barometer test on Mahathir Prime Ministership and PH government after the collosal loss at Tg Piai.

Now, if Tg Piai is any indication, who will sabotage who at Kimanis? 🤣