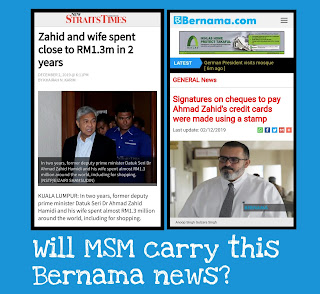 Doubtful NST would. If they do, it will be in the 4th or 5th page with font size 5.

Well, they are at it again on Zahid's case.

When it was revealed in court that his family went on RM1.3 million shopping on overseas over 2 years, all the mainstream and online media giving it a headline, NST particularly.

A PPBM yoko and claiming to be its Cybertrooper Chief even gave a list of the places.

However, in court yesterday's, it was revealed that the credit card payment for the shopping was made using cheque not signed by Zahid, but stamped signatory.

Will MSM give coverage, no less than an equal frontpage coverage?

It is significant issue because why would the Bank accept such cheque?

Who authorised the cheque payment need be known because Zahid's case came about as a result of the staff managing the account and from MINDEF squelled to the authority?

Is she handling Zahid on a silver platter to save her ass?

More to come from today's proceeding.

The fact to the matter

As far as the facts as revealed yesterday at the Kuala Lumpur High Court, the defense lawyer led by Tuan Haji Hisham Teh Poh Teik presented the following:


1. The cheques to pay for the Zahid's credit card was not signed by Zahid but using a chop signature resembling Zahid's!

3. Zahid has a personal assistant assigned to issue cheques for payments. From the beginning, Zahid had told MACC since 2018 on the negligence of then assistant, Major Mazlina for issuing the Foundation cheques to pay for his credit card which is supposed to be paid using personal cheques.


1. How could the Bank administering the checking account of the Foundation released payments even though the cheques are not genuine?

On inspection, it was found that the Sample Signature in the Form to Open New Account is for actual signature and not stamped signature. The Bank had been negligence.

2. What is the motive of Major Mazlina to issue those cheques?

Surely she should know that using Foundation money to pay for personal credit card is an offense, but she continued to do so and forging the cheques using stamped signatures.

Did she made the report to MACC for the use of Foundation money for personal use which she was negligent?

The testimony of Major Mazlina awaits.


However, there were media overspinning and intentionally misfocusing the issue on the credit card bill as too big.

Its over 2 years, hardly compares to any of Mahathir's children and grandchildren.

In typical propaganda style to disclose facts favourable to their purpose and not disclose the otherwise, no mention made on what was spent on, how much, the purpose of the purchase, etc are not subjected to prosecution were intentionally not mentioned.

Need be reminded that the charges against Zahid is for use of Foundation money (in which he is the main source) to pay for his credit card!

Since he was not signatory to the cheques, the case has a glaring loophole and since it is made known already to MACC, it smells of politically intended prosecution.