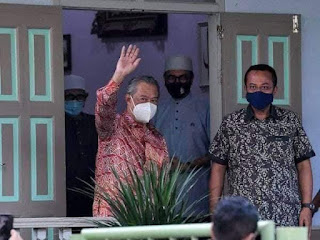 Unless any unexpected turn of event, any moment Tan Sri Mahiaddin Mat Yasin @ Muhyiddin Yassin would end his tenure as the 8th Prime Minister before Parliament could reconvene to vote on the motion for a vote of confidence.

A PAS leader and UMNO Minister was heard summoned to meet the Agong to deliver the message to Mahiaddin to resign. He has received the message Wednesday evening after the meeting with party leaders of Perikatan Nasional.

Hadi should have been briefed. Already viraled on social media is all police leave cancelled with immediate effect. Military Chief is Agong's brother-in-law and they would have been on standby earlier.

The Facebook of YB Awang Hashim for Pendang quoted Utusan Malaysia report mentioning the meet is to strengthen PAS position in the PN coalition. MB Terengganu, Dato Dr Ahmad Samsuri Mokhtar was more sombre and less committed to say anything in his FB posting. 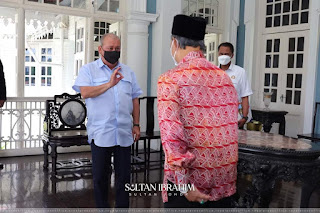 Muhyiddin trip to meet the Sultan of Johor and subsequently Hadi seemed to bid farewell. However, there are suspicion that he was seeking consent from Hadi for a tie-up with DAP and likely Amanah.

More likely than not, Mahiddin wanted to keep his roof busting coalition intact. There is a faction in PAS that still believe in Muafakat Nasional.

Without Mahiaddin, the possibility range from impossible to tough for even PPBM to survive. It is an open secret and PPBM senior leaders long admitted there is no one within PPBM to succeed Mahiaddin.

Azmin Ali won't do and none of the UMNO old and recent frogs is up to it. Unless Tun Dr Mahathir return and his choice takes over, PPBM is doomed.

However, any chance to remain in power may have ended the moment UMNO submitted 8 names to pull support from Mahiaddin and PH submitted 108 not support SDs.

By design, the final nail in the coffin came later with the additional names from UMNO to make it 15. It was intended to end any last minute attempt by Mahiaddin  to wiggle himself for dear political life. 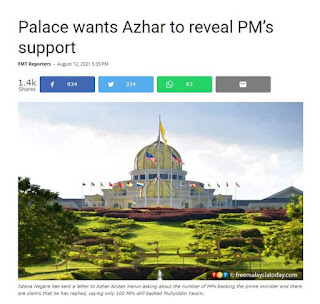 There may be some truth in Sarawak Report claim that Mahiaddin refused Agong's request to resign thrice to instead lied to Agong to claim he has majority.

Apparently sources claimed last week's meeting is a long putstanding meeting. Agong have not been receiving Mahiaddin's Wednesday pre-Cabinet briefing for a while.

In the meeting, Mahiaddin also refused Agong's request to hold a vote of no confidence immediately and insisted it be done September 15th.

Come the recent Wednesday's pre-cabinet meeting briefing, it was the end of story.

He told Agong his plan to dissolve Parliament and offer himself as Caretaker Prime Minister. There was either no answer from Agong or an emphatic No.

It was the same Wednesday that he called for a long two hours meeting with PN leader.

After the meeting he received the message to resign. Agong prefer for Parliament to make the decision, but the Speaker is bias, lied and not dependable to be fair.

More likely than not, the Speaker will collude with the Mahiaddin and the considered dissolve cabinet decision which will Covid again be abused as excuse to block participation of Parliamentarians in the Vote of Confidence.

Delta Covid scare at Parliament is real following the sudden death of an Officer to a Sabahan Deputy Minister. He was twice tested negative few days earlier. 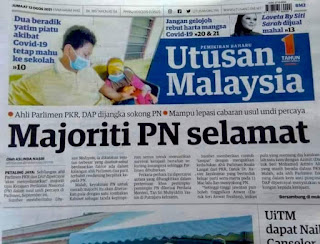 Agong may have to act swiftly on the SDs available from MPs opposing Mahiaddin.

Be it September 15th or as Saifuddin Abdullah was recently reported saying, September 7th, it is too long. By Merdeka Day, Malaysia need to be independent from the worst ever and most political opportunist government in history.

There are rumours that may have originated from PPBM leaders that MPs from PKR and DAP will support Mahiaddin.

There could be 11 from PKR and 16  from DAP. Earlier, there were talk 6 from Warisan could jump ship, but not sure MP or State Assembymen.

As one source from Amanah was saying, who would want to jump on-board a Titanic about to capsize. Despite any internal squabble, DAP will always put up a united front. However Tony Pua's recent statement to suggest support for Mahiaddin to prevent the return of UMNO may change the senario.

While PKR remain split among the remaining MPs still with Anwar and him losing grip of his party. So lets see what happens. 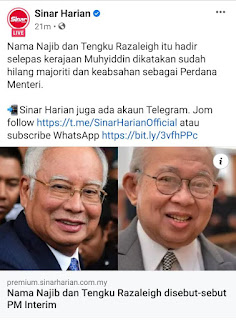 By normal convention after the PM request for Parliament dissolution, there will be a General Election within 60 days.

But it may not this time. The prerogative is Agong's and His Majesty will likely appoint a Caretaker Prime Minister to administer the country.

The Caretaker PM will lead the government with its own "cabinet" members, preferably it is a unity government dedicated to crisis management, devoid of partisan politics and all  sides of the political divide represented.

The largest block now will be PH, but appointing Anwar Ibrahim will continue the politicking. Most PKR friends could not accept the explanation it will never ever be Anwar. He has too much baggage from the past to ever be politically acceptable and viable.

There is a rumour going around that Dato Seri Hishamuddin Hussein Onn in a tagteam with Dato Seri Ismail Sabri offered to be Caretaker Prime Minister.

He could pull in support from UMNO and PN, but both are considered part of the PN #KerajaanGagal.

The attempt to remain afloat in government means UMNO will sink permanently by next GE. The PM office is a hot potato that will burn any hands holding it.

Again, lets see what happens. Will the ideal possibility for a Unity Government led by a non-partisan Caretaker PM ever see daylight?

The toll gate is open.

Go to Agong with proof of support & be the next PM.