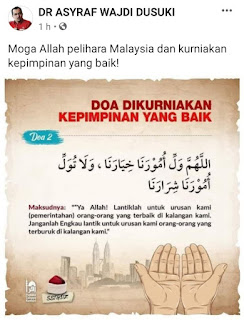 Ameen.
Tan Sri Mahiaddin Mat Yasin has formally submitted his resignation to His Majesty, the Seri Paduka Baginda Yang DiPertuan Agong, Sultan Abdullah.
According to article 43 (4), Mahiaddin has no majority and is left with the option to dissolve Parliament or if not accepted, resign.
He had opted to resign, thus the whole cabinet is dissolved along. Had he refused, Agong has option to use discretion under article 43 (2).
With the resignation, Agong would invite leaders with the majority to offer themselves as PM.
No majority 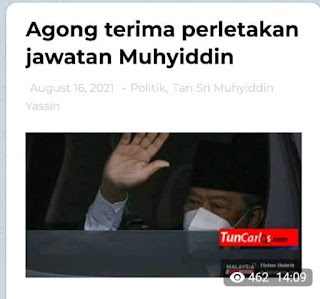 According to Rocky Bru in The Mole HERE, Agong has the opportunity to allow PH to continue the mandate given by the people to offer the post to Dato Seri Anwar Ibrahim.
And, Anwar should use the opportunity to stop the politics of revenge and unite the country.
However, a viral message on social media placed Anwar's seats at 88 seats and effort to secure votes from Pejuang and Warisan is still on-going.
In a surprise move, Dato Seri Ismail Sabri has been gathering SDs over the weekend to offer himself as PM replacement to Mahiaddin.
It is at the initiative of Dato Nazri Aziz, deception of Dato Reezal Merican as runner to secure SDs, but its not of UMNO. He failed to secure the SDs from the 15 that withdrew support for Mahiaddin.
PAS may have not signed too and Ismail has only 66 SDs at midnight. If no majority is available, Agong could call for a General Election.
Contrary to the perception play by pro-Mahiaddin cyber and media team that ICU cases in KL has declined, pandemic is still at large. Agong would most likely opt for a Caretaker PM and call for Emergency.
Mahiaddin people went around to claim Emergency cannot be called without a PM. But it was PM Dept Minister, Dato Takiyuddin Hassan, who claimed, May 1969 emergency was called and Director of National Operation Committee appointed because PM was not appointed yet.
Its disputable but it is indicative of Agong has, to borrow Mahiaddin's favourite term, prerogative to do so.
Political lockdown 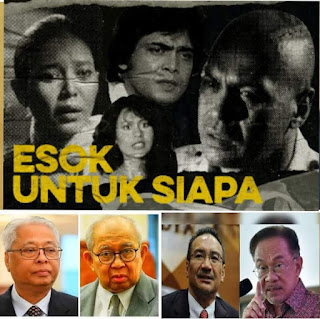 The only leader still current and capable in dealing with both the health and economic crisis coupled with has the international network to bail the country out is Dato Najib.
His name regularly crops up but there are those remain allergic of him. He remain an option and it will be known after he secure a fair court hearing, and acquited from all charges and kleptocrat political labelling.
Hopefully, a Caretaker PM is appointed by Agong, who is least partisan, has diplomatic ability, and the statesmanship to be an acceptable compromise to the three or more sides of the political divides.
The caretaker government should comprise of technocrats, who are apolitical, capable of being decisive, and having the honesty with impeccable integrity to be effective crisis manager.
Politicians from all political parties should be represented, but executive role should be limited to those with the merit and suitability.
Basically, the message is rakyat and rulers had enough of politicians and it is time for a political lockdown. Politics will only resume when sensibility return before GE15 called.
If possible, this is an opportinity for politics, business and goverance to do a rethink of their role to the nation. Its high time for a transformational process to reset and reborn for a new deal for the nation.
A major clean-up of government and government linked companies from corruption, power abuse, and red tapes must be high in its priority.
It may need more than the 60 days time set by the constitution before a suitable time for a general election is called.
The call is Agong's and it is also the chance for the monarchy and feudel ruling elites to redeem themselves from the past.
at 8/16/2021 02:03:00 PM

Go to the Palace & proof you have majority support from the MPs & be the next PM.