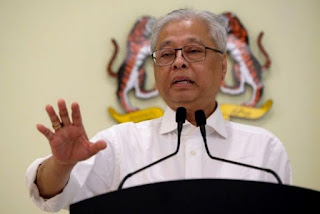 KUALA LUMPUR - Umno vice-president Ismail Sabri Yaakob is on the cusp of becoming Malaysia's ninth Prime Minister after his party's 38 lawmakers decided late Tuesday (Aug 17) to throw their support behind him.

Multiple sources told The Straits Times that a meeting of the Umno-led Barisan Nasional (BN) lawmakers agreed to nominate the Bera MP, who was deputy premier in the Muhyiddin Yassin administration which resigned on Monday.

Umno secretary general Ahmad Maslan confirmed in a tweet that "only one name will be sent as Prime Minister nominee by Umno-BN MPs that is Ismail Sabri".

"I am happy because we are united and agree to one candidate," the Pasir Salak MP said.

Pengerang MP Azalina Othman added that "we have been briefed that BN will have a set of partners to cross the finishing line of 111," referring to the number of MPs needed for simple majority in the 222-seat Parliament, as two seats are currently vacant.

With this, Datuk Seri Ismail will likely have the support of 115 MPs, mirroring the same makeup as the Perikatan Nasional (PN) pact that Tan Sri Muhyiddin led before 15 Umno lawmakers loyal to party president Zahid Hamidi pulled their support in early August.

Earlier, Umno supreme council member Sharkar Shamsuddin had said the party's highest decision-making body had left the choice to BN MPs, who have up to Wednesday 4pm to inform the King of their pick.

"The Supreme Council all but endorsed Ismail Sabri," another council member told The Straits Times.

Even though there was a plan by some to nominate Ku Li, it was never something most MPs were going to agree with," he said, using the popular name for veteran politician Tengku Razaleigh Hamzah.

He was referring to the faction loyal to president Zahid Hamidi, which had pushed for Malaysia's longest-serving lawmaker Razaleigh to lead government only until the Covid-19 pandemic was under control and a general election could be held.

Outgoing Federal Territories Minister Annuar Musa had also said on Facebook that all 42 BN lawmakers had agreed to nominate a single candidate and "more than 69 others needed have agreed to make way and give their black-and-white support to the BN candidate."

He was likely referring to other PN allies such as Mr Muhyiddin's Parti Pribumi Bersatu Malaysia and Parti Islam SeMalaysia, which number about 73 MPs altogether.

Barring any new developments, Umno's decision will leave another contender, Opposition Leader Anwar Ibrahim short of a simple majority even after Parti Warisan Sabah offered the support of its eight MPs.

One person kept saying 'i have the numbers'.