What will new cabinet be? [up-dated] 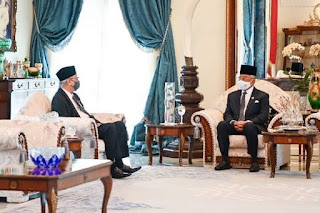 Prime Minister, Dato Seri Ismail Sabri Yaacob presented his cabinet list to his Majesty DYMM Seri Paduka Baginda Yang Di Pertuan Agong in Pahang yesterday.
The announcement was due yesterday but postphone today this morning and swearing in to be done Monday.
In a deft touch move, Ismail emulated the idea of unity government with a meeting and understanding with opposition leaders on Wednesday.
It is to fulfill Agong's wishes to lower the political temperature. And it serves to allay suspicion he has to succumb to the veiled threat from Tan Sri Mahiaddin Mat Yasin.
Though he mentioned of conditional support to Ismail to not include "kleptocrats" or more accurately "kluster mahkamah" in cabinet or any government role, it is seen putting  pressure for PPBM to get key cabinet positions.
Its an open secret that both Muhiaddin and Tun Dr Mahathir has preference for Dato Seri Azmin Ali for Deputy Prime Minister against the wishes of few members of PPBM's MPT, particularly Dato Seri Hamzah Zainuddin.
Though Azmin have no where to go, other members of ex-PKR faction could still find a new haven.
With the pressure of pullout threat at bay, what will Ismail's cabinet be?
Former Johor State Assemblyman, Datuk Tengku Putra Haron Aminurrashid Jumat expressed his view on his FB: 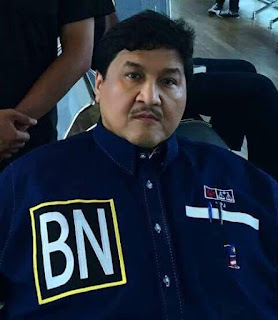 Points To Ponder For The Prime Minister.
1. Reduce the number of Cabinet members to bare essentials and do away with Deputy Ministers.
2. Let the Ministries’ Director Generals report directly to the Cabinet/ PM.
3. UMNO presented no ultimatum to YAB Tan Sri Mahiaddin Yassin when they gave unconditional support to him forming the Perikatan Nasional led Government on 7th March 2020. It should be reciprocated.
4. The Deputy Prime Minister’s post (not provided in the Constitution) was not filled for 17 months until the previous premiership was on its deathbed in July of 2021.
5. Some crucial Ministers appointed by Mahiaddin from UMNO last year were NOT names submitted by the party’s leadership. Therefore the “list” provided today by PPBM to YAB Dato’ Sri Ismail Sabri does NOT have to be taken as biblical.
6. If at all the appointment of Deputy Prime Minister needs to be “entertained”, it should be given to the highest ranking qualified official in the PPBM after Mahiaddin, like Ismail Sabri is in UMNO. NOT any other force-fed name from that party.
7. A threat to this new administration will be looked upon by the Rakyat and His Majesty the YDPA as “trecherous” to the wellbeing of the nation.
8. Therefore, it is unlikey that PPBM dares to withdraw support for the govt if the PM decides against complying with their demands.
9. Worst case scenarios if PPBM pulls out of the fold: a) The opposition block Pakatan Harapan votes in confidence of the new PM in Parliament in compliance with the people’s request to heal the nation, or b) The YDPA refuses to entertain the continued political crisis and disolves Parliament forcing a General Election in 60 days. In this event, PPBM will undoubtedly be punished severly by the voting public.
10. Conclusion: Dismiss any demands or forms of extortion by any party, form a Cabinet that can work with you (PM Ismail Sabri) and succeed in healing this nation OR, prepare to walk on eggshells having policies contradicted for the remainder of this term taking UMNO/ BN down with you in GE15.
------------
Political pundits view the cabinet as a do or die situation on the future of UMNO. Ismail is not in the most enviable position.
No major expectation on Ismail except no Azmin for DPM, no Wahabi for Minister in the PM Dept on religous affair and Ronald Kiandee of PPBM for agriculture.
It is Ismail's call.
Though not personally preferred, he may be requested to maintain Tengku Zafrul for Finance and Tan Sri Annuar Musa undeniably a suitable choice for Communication Minister.
Will update upon announcement.
Update: 10 PM
PN 2.O CABINET 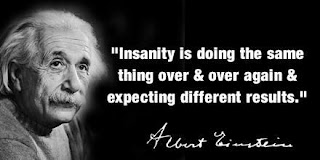 List of new cabinet members available on Wikipedia here.
Cabinet number merely reduced by 1 to 69, which exclude Tan Sri Mahiaddin Mat Yasin.
Already cabinet is dubbed as PN 2.0 cabinet and to quote new Youth and Sports Minister, Faizal Azumu, PN government but led by an UMNO PM.
Ismail Sabri is believed to have evaded two UMNO Supreme Council meetings to discuss the cabinet appointments prior to announcement.
Generally, its merely reshuffling of personalities. Its as good as switching the vase from the right side to the left but same furniture cabinet.
Failed names such as Rina Harun and Azmin Ali remain. New Multimedia and Communication Minister, Annuar Musa's hint of not much changes turned out true.
In the words of Einstein, "Insanity is doing the same thing, over and over again, but expecting new results". 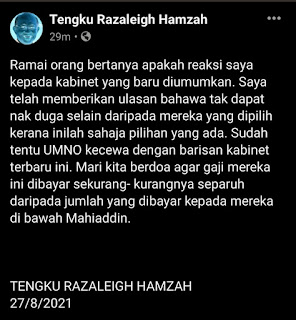 Perhaps, Ismail does not have much option available. Read Joceline Tan in The Star here. If not fully accessible, there is this FB status here.
Ismail is constrained by the talents and fragments of support, but he is not without options.
The cabinet supposed to focus on addressing the pandemic and economic fallout lack new talents and correspondingly fresh ideas.
To quote the description from a former cabinet member from Minitry of Finance, "useless" Tengku Zafrul appointed to Finance again. Nothing beneficial in the cliche fiscal policy continuity. He has lots to answer for.
Out-dated and at your instruction, Mustapha Mohamed remain in charge of EPU. Has economy recovered 6 months into the pandemic?
At a strategically important Ministry, disastrous former Foreign Minister, Saifuddin Abdullah return to his earlier Ministry to replace Hishamuddin. 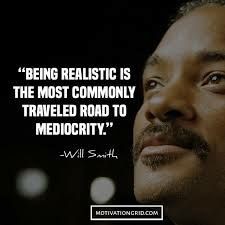 From a spine position, highly experianced Hisham given the Defense position, though strategic for the country is of lesser importance to foreign affair.
Dropped from UMNO is Shamsul Nasara. No portfolio for resigned Deputy Speaker, Azalina Osman. The comfort is new Minister in charge of law and Parliament is the highly experianced Parliamentarian, Wan Junaidi.
Brought in are Shahidan Kassim, Noh Omar and Mahadzir Khalid. Its a celebration of mediocrity.
PPBM and non-party choice from UMNO retain all their Ministership, including Eddin Syazli, the Deputy Minister who dozed off in the midst of a University convocation.
With the announced line-up, the cooperation pact with opposition leaders is suspiciously an unwritten pact to keep veterans politicians in UMNO, PKR, DAP, PAS etc to remain in power
Khairy switching portfolio with Dr Adham Baba. His big break to shine in the limelight. Will it mean less media hogging from DG Noor Hisham?
Idris Ahmad takes over the controversial religous affair portfolio at PM Dept. Dropped are his fellow PAS, Khairuddin Takiri and the deceptive Dr Dzulkifli.
With this as his cabinet, Ismail only choice is to rise to the occassion.
It is a crisis and even 100 days is too long for a milestone. The political change has wasted a full month of work. 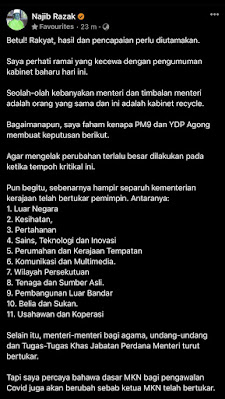 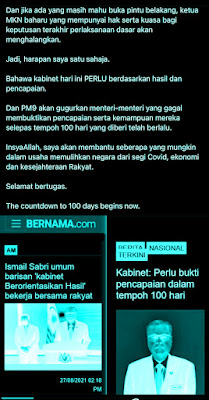 Next big test is budget for 2022. Followed by the 100 days mark in mid-December.
Its a big task ahead, but Ismail made the conscious choice for a PPBM politics as usual cabinet than crisis driven war cabinet.
Prayers for safe passage to Ismail. Nevertheless, this may not be another short-lived cabinet, but it is temporary in nature.
The General Election matter for current ruling coalition to continue to exist with a new mandate from voters or new government installed by new voters which include 18 year olds.
There lies the challenge to this coalition of convenience.
With Hamzah Zainuddin remain Home Minister, Annuar Musa to steer propaganda, Shamsul and Azalina out, and those dubbed as traitors to UMNO are in cabinet, governance will not be the focus and it will return to politics as usual.
The next political target is to seize control of UMNO. It explains the Zahid haters ungentlemenly remarks of his slip disc operation.
at 8/27/2021 10:39:00 PM