Vinod Sekhar could sue the daylight of MalaysiaNow 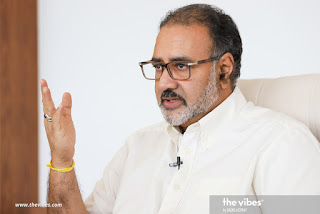 The last words in TwentyTwo13's interview with Dato Vinod Sekhar is probably an indication he will not waste any more time with MalaysiaNow or Malaysia Today and sue the living daylight out of these two portals.

Reproduced from The Mole:

I’m a businessman and I want to do as much as possible. I’d like to leave a legacy for my daughters so that they will be proud of me like how I am proud of my father. That’s setting the bar very high. I’ve passed the stage of looking at petty things. Legacy is all there is.

The two portals were still at it to repeat on his already cleared bankruptcy and again mentioned in their so-called scoop on Vinod involvement in the alleged Hungarian ventilator scandal.

Since 2019, Vinod started bouncing back from the financial setback (read Astro Awani here). Because of the renewed onslaught, he had to do another round of PR exercise (Read FocusM here and here). Image and perception is everything to a businessman.

Its one thing for writer or social media commentator to raise issues against politicians. They are more hardy, thick skinned, and capable of replying back.

But when involve civil servants and businessmen, it is a different ball of wax. Extra caution is required. Ensure it is substantiated and can be proven.

Civil servants hardly speak and give public statement, but when they react, law enforcement agency would collaborate. However, businessmen will just take you to court and sue in the millions.

A bad story can affect a businessmen reputation, spoil their business deals, disrupt their credit rating and facilities, and result in disruption to their business. These are both quantifiable and justifiable in court.

From afar, the two portals have been irritants and any businessman will have their limit. When Vinod started The Vibes in September 2020, Malaysia Today was in their elements to run him down and even quoting from February 2000 WSJ article here.

This time around the obvious hype by MalaysiaNow has the faintest of smoke emanating from Hungary to implicate Vinod as on fire.

It is an offshore deal, transaction involved Chinese and Hungarian parties, not in the jurisdiction of Malaysia, and nothing illegal done. Its all legit.

His role was merely a middleman to assist in sourcing the product and ensure delivery. There was no mark-ups or layering. No decision involved Vinod. The transactions were made directly between the two parties.

At this stage, it is merely a domestic political issue between opposition and government in Hungary. All the smoke are merely politicians and NGOs. No law enforcement agency involved yet. Far from a case brought to court.

However, MalaysiaNow made the claim Vinod will be investigated and quoted the agency. The claim by MalaysiaNow could smear Vinod's reputation and making them liable.

If no such investigation done, it will be an open and shut case in court against Abdul Rahman Koya

Vinod had just turned 53 recently, and his birthday gift to the people and country is a RM6.5 million mobile hospital.

He has long been in business and faced the ups and downs of economic cycle as any veteran businessmen. The bankruptcy scare is just part of his adventure.

The man had just lost his mother in March 2021. However, her death has not slowed him down to reflect or stop to take account of his life.

He  seemed to be in a hurry with various business ventures and seriously pursuing the mantra of social capitalism or the good capitalist he expounded.

In the interview, he told Malaysia Focus in May:

“PETRA Group has since the start of the movement control order (MCO) last year, done various initiatives to help and support communities in need with some RM8 mil in aid having been channeled towards refugees, the disabled, Orang Asli, hospitals, old folk’s and children’s homes, and the hardcore poor.”

As discussed with the Science, Technology and Innovation Minister Khairy Jamaluddin who is also the Coordinating Minister of the National COVID-19 Immunisation Programme, the PETRA Group stands by its offer to donate up to 200,000 vaccines to the country’s most vulnerable groups, according to Vinod.

“We are offering to purchase the vaccines and give it for free with no strings attached, other than it should only be used for the B40 and vulnerable communities,” he insisted.

That did not happen and lets not get into it.

Had he rebutted, it could be embarassing for Khairy who had made a political issue against those offering to donate vaccine to the poor.

Nevertheless, Vinod has strong views on socio-economic issue affecting the people and nation to be bogged down by political irritants such as MalaysiaNow.

After being bestowed the Darjah Cemerlang Seri Melaka from the new Governor of his home state, Vinod was reported expressing concern for the plight of the SMEs. In May, he expressed opposition to the adoption of IR4.0 at the expense of labour.

He cannot be pigeon-holed merely for his open political leaning to Anwar Ibrahim. When his mother passed away, those coming to pay respect came from all walk of life, race, religion, social class and political leaning.

Azmin's MalaysiaNow may have picked on the wrong political target.

In order to be able to "Sue the daylight of MalaysiaNow" [sic] or anyone else for that matter presumably for defamation one of the preconditions (in a suite for defamation) is that the allegations must not be factual or true. Truth is the strongest defence against the charge of defamation.

Secondly and equally important is that the party suing and claiming to have been defamed must be able to prove they have a "good reputation" to defend. This is a sometimes difficult position or quality to prove.

Public servants (or civil servants) cannot be successfully sued mot times because they are indemnified against such suits on account of enjoying immunity against law suits in the course of their duty. There are exceptions to this rule where a minister or parliament elects to remove that indemnity.