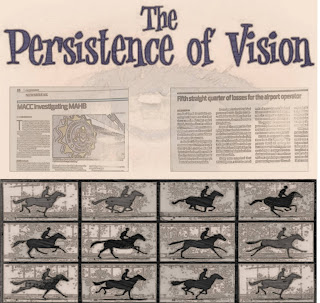 According to Wikipedia, persistence of vision is the “optical illusion that occurs when visual perception of an object does not cease for some time after the rays of light proceeding from it have ceased to enter the eye”.

A series of vision creates an illusion of motion in the old film on reel. And, a series of reported and analysed news or events could create a visual perception of the reported subject. Seldom governments or corporations or personalities are too adamant with the facts before their hand.

They failed to realise the visual perception from the publicly available and widespread report or analysis of news or events. By the time, they realised the problem and gone into firefighting mode, its too late and perception is imbedded.

Like all players in the aviation industry, Malaysia Airport Holdings Berhad (MAHB) is in a tough business condition. Though still have the reserves and credit facility to keep going and carryout plans, the 5 quarters losses is their persistence of vision.

It can be easily planted in the minds of others that MAHB have NO money.  The visual perception will only lead to hasty decision by the less in-depth decision makers up there.
Persistence of vision
Though easy or difficult to pinpoint, it is an open secret that there are people of benefit keen to see Subang Airport carved out to Tan Sri Desmond Lim. 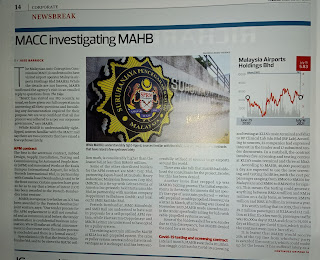 With that as the backdrop, a newsbreak entitled “MACC investigating MAHB” by The Edge dated July 19 to 25 gave the immediate perception that hanky panky occurred on the tender for Aerotrain.

However, it was more for the Covid19 Testing and Screening contract awarded to BP Lab. Visual perception created on MAHB is that it is badly run and incapable. 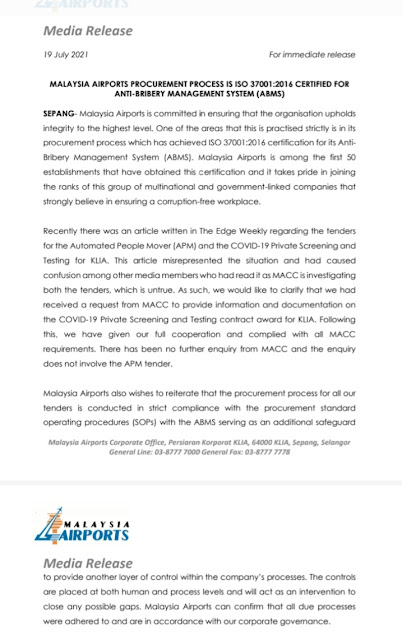 In a press release dated July 19th, MAHB insisted that both the tender process for the Automated People Mover aka Aerotrain and C-19 testing met the ISO 37001:2016 certification for its Anti-Bribery Management System (ABMS).

Market talk is MyEG, being MOH partners for payment gateway, may have been a disgruntled competitor for losing all its bid to BP Health. One has to be in the know of Immigration's NIIS bids to be aware of their new political affiliation.

The denial was disputeded by an article in newswav, "Graft-proofing procurement process is no easy task, MAHB baby". Persistence of vision in the making.

While that was going on, MAHB recently tested the water on Tengku Zafrul’s commitment for MAHB to develop Subang as MRO centre and aviation industry hub.

MAHB announced plan to develop Subang Terminal 2 into a hangarages or in simple parlance, parking lot for planes and its awaiting government’s approval.

That would be counter to the plan, if there was any such thought out plan, put together by WCT.

It was followed by a friendly reminder that government should be compensating MAHB for spending made on behalf of government on government-owned airport asset.

If the sudden investigation by MACC on an obvious competitor’s jealousy, then it could suspiciously be a warning message to MAHB.

They need to heed of a potential persistence of vision being created against them.

Being adamant to spend on an expensive aerotrain during a slow pandemic business condition may not be wise and prudent. 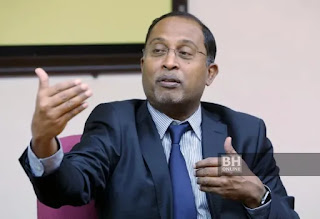 If that is the position taken by Chairman Dato Dr Zambery Abdul Kader, its not helping to show he is above board and professional as no one knows.

Its easy for him to fall into the visual perception that he is gullible to pressure from above and his commitment to Subang Airport can be politically re-moulded by due pressure.

Seeing the opposition was louder in giving support to union, there exist prejudice against his disposition as politician in which no explanation or denial can change the visual perception.

If MAHB insist on spending more than RM700 million, a simple story with the persistence of vision can be made out that MAHB has no money left, need reimbursement from government, and carving Subang to Desmond Lim is both sensible and an easy sell.

Its better for MAHB to focus and use available resources on Subang.

Sepang Airport is government asset so why be foolish to spend, not get reimbursed, and being seen as not having focus. MAHB could lose Subang, a critical component of MAHB business to persistence of vision.

More so, there are sufficient justification to postphone decision for Pestech-Bombadier.

In addition to being expensive and need to stay focus on Subang, Pestech has questionable track record with a police report and legal suits in court as indications.

Quite sure, Bombardier’s “role” in the recent Kelana Jaya train collision and last week's door opening incident cannot be ignored and any safety concern organisation would hold back decision.

Not to sound racist but merely being cynical, imagine three Bumi companies and an Indian company enter into tender, but a Chinese company won.

Ponder the fact that Bumiputera used to have a large presence and practically dominated the Malaysian aviation industry.

And ponder also that the horizon for Covid is still a long way from sight. The Lambda variant has not reached the shore and region. The right call is prudence and preservation.

ersistence of vision or be adamant may end up falling to a trap.