Show your support for Mukhriz Mahathir 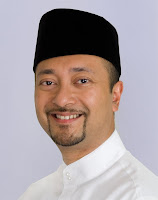 Dato Mukhriz Mahathir, the new Member of Parliament for Jerlun has written to Abdullah urging his to take responsibility for his arrogant challenging the people at the ballot when they expressed their dissatisfaction in two major demonstrations. The people have spoken and rejected him, thus he should honourably resign. Read here.

This blogger support the honesty and brevity of Dato Mukhriz to seek the resignation of Abdullah for it is beneficial for the country as it could lead to a positive reform of the ruling party, UMNO and Barisan Nasional.

My fellow readers can give their support for Mukhriz by signing this Petition of Support. You can also show your support by sending an e-mail to petitbadawi@gmail.com with personal details of your full name, NRIC/MyKad no., tel. no. and if applicable, UMNO membership no.

For a better tomorrow for the country, Dato Seri Abdullah Ahmad Badawi should take responsibility for his incompetent leadership and administration, and nepotism practises has resulted in the poor state of the country's economic growth, rising prices, unemployment, rising crime, ethnic and religious tension, compromise of national security and international affair, etc.

I append below my puisi in appreciation and luv to Ayahanda Tun which was presnted to him during the official opening of the Kelip kelip located in kampung Kuantan, K. Sel. on 13-9-1999.

HOPE THE RECOLLECTION OF THE ABOVE
PUISI WILL ENHANCE YOUR SPIRIT IN PURSUIT OF AYAHANDA TUN WAWASAN MENDAULATKAN BANGSA MELAYU IAITU
MELAYU BESAR!
RGDS