UMNO and It's Misunderstood Sense of Loyalty 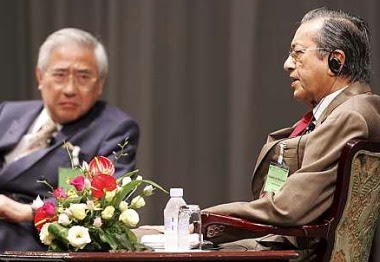 Mahathir in dialogue with Kazuo Ogoura, president of the Japan Foundation, at the 14th International Conference on “The Future of Asia” in Tokyo. — Picture from AP
Dr Mahathir has yet to let up in his attack on Abdullah. He gave one back to Musa and Shahrir. He responded to the spin against him as wroking for Anwar Ibrahim's favour. Another point against him is to requote his words to be loyal to the party.

Whatever it is, despite the repeated voice of "support" for his leadership, Abdullah is already on menggelabah mode. Although there are few at the grassroot feeling restless, they agree with Tun. He has expressed the frustration at the grassroot with the leadership of Abdullah. However, Tun need to convince the people that he is not out to destroy UMNO. Much spinning and oversimplification of history is happening.

With the loss of Pulau Batu Putih and the poorly timed response to be conciliatory with Singapore by Abdullah, do not expect his rating to go further up. It will just enhance the public fear that given time Johor will lose Iskandar (or used to be WPI or SJER but not yet Khairy Malaysia) to Singaporean.

Already, the Tingkat 4 are restless with the coverage given to Tun. Words are circulating that Kamal Khalid is back to his old self - making threatening calls to news paper editors. Wong Choon Wah may soon decay on his press freedom stance.

Kamal is said to even requesting all articles on Tun must get his prior approval. Ah ... rumours, perhaps he is merely seeking a head start with a his response. But will Shabery allow a turnaround from his liberal press and blog friendly policy? Will he risk his boss's future?

In yesterday's The Star, they reported:

TOKYO: Umno is preparing its own demise and that of Barisan Nasional if it continues to have Datuk Seri Abdullah Ahmad Badawi at the helm, former Prime Minister Tun Dr Mahathir Mohamad said Thursday.

He also said that his son Datuk Mukhriz, who decided against following his move to quit Umno, might face “difficulties” staying on should Abdullah continue to be the president.

“Yes, Umno can consider me irrelevant. It is their funeral and not mine. Today the Barisan has been destabilised by Abdullah not being able to lead it to victory in the general election.

Dr Mahathir, who is here for a dialogue session at the Nikkei conference, said he predicted Barisan would be finished in the next elections if Abdullah continued to serve as Prime Minister.

Better Alternative Than Of Anwar

Further in the report, he explained his call for BN to jump Independent.

“I am offering an alternative which is less dangerous for Barisan. Instead of jumping to another party, I am telling them to form your own group which will be the determining force in Parliament.”

He added that if Abdullah did not go, he would be in the minority because the other had already left and he would have to give up his post as Prime Minister.

“If in that case Anwar wants to come in, this group will give support to Barisan and Barisan with a new leader can still go on to become the Government,” he said.

There are many who now believes that Tun saved UMNO indirectly by his resignation and at the same time spoiling Anwar's jump ship threat. The multithreat to UMNO made UMNO to encircle its bandwagon and limit the squable within UMNO.

Tun has mentioned this many times in his speech to call for loyalty to the party, its cause and struggle. But not be feudalistic to be loyal to a person or as Tun's new pun, DYMM Sultan Abdullah Shah.

Rafidah still didn't get it, did she? She is spinning an answer merely to discredit. She forgot she lost her Ministerial post to a "lesbian" or she is just waiting time to return some favours?

Earlier, at a press conference with the Malaysian media, Dr Mahathir was asked why he was being disloyal to Umno.

“If we look back at history, Tun Razak did not agree with Dato Onn Jaafar to open up Umno to other races. To Tun Razak, his disagreement did not mean he was being disloyal to Umno.

“The same goes when in 1969, the Alliance did not perform well in the elections and many criticised Tunku Abdul Rahman. Razak was clearly sympathetic towards his critics, including me.”

He also said that when Tengku Razaleigh Hamzah, Tun Musa Hitam and Abdullah challenged him when he was Umno president in 1987, he never accused them of being disloyal.

Asked if he was willing to meet Umno deputy president Datuk Seri Najib Razak, Dr Mahathir only had one question to ask Najib.

“If Najib wants to say those who are not loyal to the president is also against the party, I want to remind Najib of what his father did back then,” he said. 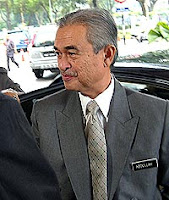 The day Tun announced his resignation on Wesak Day holiday, Abdullah had a session with all Branch Head in Selangor. Tun's resignation was obviously discussed with few planted names from the floor like Azman Salleh was lambasting Tun.

Abdullah was too defensive and insecure that in the opening of his speech, he accuse the other side of sabotaging the event.

Omigod, with the Mr Sabotageur and the man with the two Muhammad on his side, how could other side sabotage. He still thinks it is a coordinated affair and not the genuinely disgruntled grassroot.

There was only 1,300 out of 3,000 that is expectd to turn up. even thsoe that stayed were restless since late noon becasue Abdullah did not turn up.

With UMNO and BN MPs having to keep recitig pledge of support, it is making Abdullah look insecure and unsteady.

Ezam's return is good timing and good extra ammunition. It helps the hypothesis that him and Khairy being in the same bed with UMNO's Numero Uno enemy, Anwar Ibrahim being true.

Each and every one of us, including the frustrated and angry people of Johor, should continue our protests and OPPOSITION to the LAME leadership of 'the man who thinks he is the PM".
This is the LEAST we could do as RESPONSIBLE CITIZEN of this land.
If we continue with the 'tidak apa' attitude, then in no time all the LAND TITTLES in Johor Bahru would be under some Singaporean's name, or worse till under Temasek Holdings.

ACT NOW! Chase the TRAITORS away.

WHO WANTS YOUR SHIT LAND TITLES, YOU CAN KEEP THEM AND SIT ON THEM