Allah for East Malaysian Christians only: A solution nevertheless 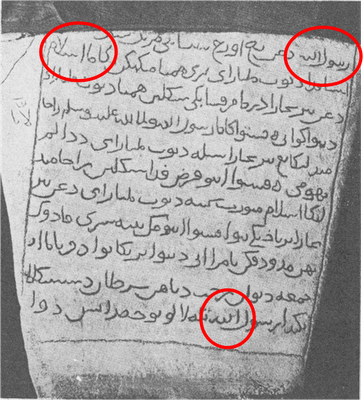 Allah is seen in this Batu Bersurat stones 1303, Christian's earliest Malay manuscript is 1524. To whom does "Allah" belong to here?
Dato Nazri Aziz was sent to East Malaysia last Wednesday for damage control on the Allah issue. Words emanating from there are saying that Allah would be allowed usage in Christian’s Malay publication for East Malaysian circulation.

That may not be the most ideal solution for both parties. It does not feel right. But in the light of the hard stance by both parties, it is a solution nevertheless.

Already political critics from the other side are claiming it is a compromise made out of political expediency. But, it is hardly so.

PAS’s Khalid Samad have been saying that such usage in East Malaysia has been since eternity, or their historical claim is for 300 years. It is already culturally embedded and the Muslims in East Malaysia have tolerate and lived with that reality.

In fact, as my Sarawakian friend told me, such familiarization by non Muslims with Islamic terms has actually favoured the Muslim. It has eased the conversion of Christians to Islam.

The solution could be a realistic closure to an attempt by shit stirrer and PM-at-any-cost Anwar Ibrahim to create a communal division within BN and voters facing up to the Sarawak state general election.

Again, the wrong of 300 years made to deceive Muslim into conversion to Christianity by intentionally mistranslating the word Allah as tuhan can not be justified.

For the Herald - Catholic Weekly, they would not want any restriction on their publication, which they may not admit but, undeniably targeted for the Semenanjung Malay Muslim.

They would likely argue that it is an infringement on their rights for religious freedom which include the act propagate their religion.

At least, that is what they understand article 11(1) of the Federal Constitution to be, as endorsed by Justice Ban Lee Lian controversial judgement.

They have been arguing that the word Allah was used by Arab Christians and Jews as God. To argue their case that Allah is God instead of the true meaning in Malay word as Tuhan, they referred to the an Indonesian bible and age old dictionary as proof.

Off course, the Indonesian bible and dictionary can be proven to be linguistically flawed. It is not difficult to proof that the Christian Dutch took evangelism seriously to the extent of manipulating translation to serve their propagation purpose.

Blogger SatD here was able to dismiss such argument by merely showing historical evidence that Islam has existed more than 400 years based on the Batu Bersurat evidence.

Another blogger, Ktemoc Konsider here asked where in the Bible was Allah used as name of God? He claimed that Yahweh or Elohin was used frequently but Allah.

With those cultural issues cleared, there are two aspect of religious freedom for non Muslim that need to be understood.

Constitutionally, clause (4) of article 11 of the Constitution, limits the freedom of Christians to propagate to Muslims. While in article 3(1), the freedom to practice came with the condition that it be done to maintain general peace and harmony.

Justice Bee Lan Liau missed an important clause (5) that empowers Government with the disgression to ban non Islamic practice that could erupt into public disordera.

Although the court’s decision may not currently be in their favour, Bee Lian Lau’s judgement is seriously flawed and chances are in can be overturned at the Court of Appeal level. Read a criticial analysis of her judgement here and here.

The problem with taking such a hard stance now is that it is not politically correct.

But it is made harder by the fact that there is an unresolved issue in court with the judgement in favour of the Christians and has constitutionally eroded Government's discretionary power that could proof useful for balancing and negotiating between disputing parties.
at 1/17/2010 03:07:00 AM

ps: hope u dont mind putting a hyperlink to the "here"

I'm sorry Sir, but you seems to missed out links which related to this posts.

may be Nazri did not read this -

I would like to share a number of interesting thoughts of Pastor Brutus Balan of a Baptist Church in Australia in the Facebook (FB). I hope he doesn't mind.

In his posting Brutus Balan said,

1. In today's religious context, the word 'Allah' is a word loaded with Islamic theology. The God of the Christian Bible Yahweh-Elohim from Genesis to Revelation is a trinitarian mono God. IT is not a creation of the Church but it is a inspired revelation. Its maths is hard to understand but it is the heart of John 3: 16 and Jesus' life will be nonsensical as much as His sacrifice for sinful and doomed humanity if the second person of the Trinity did not incarnate in the human flesh. The Christian Gospel is based on this redemptive revelation of the triune Godhead. The Quranic concept of 'Allah' is in total opposition to this. There is NO similarity between them whatsoever.

2. The early 'Christian missionaries', mostly Roman Catholics erred when they started to Christianize pagan words (jargon/terminology), concepts, icons, statues (Mother and child), festivals and celebrations (like Christmas/Easter) and included them as Christian so the 'converts' from the Christianized societies are not brought into a cultural vacuum. Therefore the word `Allah' that pre-dates Islam, a word that was and is a non Hebrew word for a pagan deity was Christianized and retained among the middle Eastern converts and used in the Bible translation. This syncretism was followed in Asia with the use of the word, Allah among minority ethnic 'converts'. It was wrong then and it is wrong now.

Spot on, bro. on this
"In fact, as my Sarawakian friend told me, such familiarization by non Muslims with Islamic terms has actually favoured the Muslim. It has eased the conversion of Christians to Islam."

Actually, this is a NON ISSUE and the problems started when majority put politics above religion a.k.a secular thinking esp. when the Political leaders (whose GOD is MONEY) talked about religion.

The fact of the matter is the christians just don't need to use the word allah.

This debate has nothing to do with who owns the word Allah or the word God. It is about a situation that in the view of government is likely to be a cause for communal disharmony and unrest if the word Allah is sued by the Catholic Herald. That perception is borne out in the events of recent weeks. Even if that was a self fulfilling propphesy of government.

In whats a highly charged environment of religion and race divisions the use of the word selectively at that and provocatively by the Catholic Church is dangerous and divisive and a threat to peace and harmony. Its not up to the judge to decide on Arab and historical uses of the word to decide the government's prohibition of the Herlad's use to be unconstitutional.

The Catolic Church an institution that for ages prohibited the use of any other language than Latin in its liturgy on pain of punishment and ex communication cannot claim it has been consistent with the use of that word somewhere in an irrelevant time in history which is in no way refelctive of the changed conditions in which we exist today.

Bee Lan Lau's references to historical and cross cultural uses of the word defy logic. It is as if to say that Catholics are like Romans and other westerners and Muslims like Arabs. There could be nothing further from the truth than those analogies she admitted into evidence in her decision. Back to the drawing board for the government or UMNO will be radicalised.

So you want solution based on a few articles written by whom?

Now it's Penang and Wilayah!

Why not Melaka? After all Melaka has no Sultan?

That boy know nothing deep about Islam, better he keep quiet laa...what for his barking here...there.. Better cheek their own pocket before lost.....