Why are you afraid, o yea of little faith? 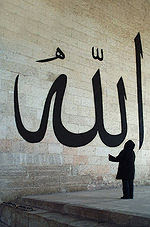 Resolution to societal differences lies not in dogmatic righteousness of the law of the courts, bureaucracy of government, and narrow interest of politicians and self interest groups, but “silence” engagement in non confrontational and inclusive ways.

I stand to believe that religious dispute should be entrusted to practitioners and wise men of cloth and not be superseded by outliers of fringe groups, deviationist and non practitioners. Let society be involved to resolve its own dispute, and not be constraint and made subservient to the courts, government, politics, and interest groups.

In the wake of the High Court decision on the kalimah Allah, the Catholic Church of Malaysia has failed in their faith to pursue for peaceful co-existent and sensitive to the majority Muslim faith in this country.

The settling of legal dispute which leads to a single winner does not necessary have a winner. The loser lose. But, did the Catholic Church win with them now seen in a bad light of having devious intention to evangelise Malay Muslims?

The Catholic Church of Malaysia should have acted responsibly to find an amicable and peaceful solution with the Islamic religous authority. But instead, they decided to take the adversarial legal way that does not come out with all winners.

If the men of cloth still have such adversarial tendency, what hope is there left for the much needed religous life in modern society?

He said the law did not take into consideration sensitivity factors that could provoke tension and animosity between followers of different religions.

“The solution to the controversy will not be achieved by making an appeal to the court. Such a sensitive issue cannot be solved through law,” he wrote on his blog www.chedet.co.cc yesterday.

Dr Mahathir said the controversy started when he was still in office, adding that the Cabinet at that time thought the usage of the name “Allah” in the Bible was a sensitive issue.

Minister in the Prime Minister’s department Datuk Seri Nazri Abdul Aziz said the issue was not about the usage of the word “Allah” but the Home Minister’s powers in prohibiting its usage.

“The judge erred. She got it all wrong. She decided on the fact if the word ‘Allah’ could be used or not. That is not the issue.

“The issue is whether the minister has the power to make such decisions because the consideration is towards public interest,” Nazri told newsmen at Parliament House yesterday.

He added that the minister made the right decision because allowing the usage of the word “Allah” in this country under a non-Islamic context would cause confusion and dissatisfaction as 60% of the population were Muslims.

United Pasokmomogun Kada-zandusun Murut Organisation (Upko) president Tan Sri Bernard Dompok said every community should be allowed to use terms that they are comfortable with.

“Historically, the term has been used for a long time, even before Sabah decided to establish Malaysia with Malaya, Singapore and Sarawak in 1963,” said Dompok, who is Plantation Industries and Commodities Minister.

“The term God is used in English, ‘Allah’ in Malay and ‘Kinoingan’ in Kadazandusun,” he said.

Minister in the Prime Minister’s Department Datuk Jamil Khir Baharom said steps would be taken to resolve the issue and parties should not use the situation to cause further problems and confusion.

Minister in the Prime Minister’s Department Tan Sri Dr Koh Tsu Koon, who is in charge of national unity, called for attempts to seek a win-win solution on the issue and for everyone to approach this “with a cool head but a warm heart.”

Meaning we have lost that best philosophy of "WIN WIN SITUATION"

What a sad situation we have to suffer now and worst latter.

Who is this Azly guy?
Another two bit professor running around with self importance in our LOCAL university talking about Melayu Itu Melayu Ini?
I rather listen to Deep Purple.

Assalamulaikum the Voice,
As a muslim, we cannot simply make argument on what is permissible and what is not permissible on the base of assumptions and arguments. We, muslims, must use the 'nas' nakhli or akhli). Doing what you are doing might deny what God actually intended. So, go and read from people who are more 'learned' than us on the matter...

Can someone please show me that THE VATICAN aka POPE agreed with Malaysian Church using ALLAH?

If we MUSLIM allows ALLAH as a translation to GOD.then we can ask POPE to change all BIBLE to translate GOD to ALLAH as in their argument..that since begining they@christians is using ALLAH as their name for GOD.

Can someone please show me that THE VATICAN aka POPE agreed with Malaysian Church using ALLAH?

If we MUSLIM allows ALLAH as a translation to GOD.then we can ask POPE to change all BIBLE to translate GOD to ALLAH as in their argument..that since begining they@christians is using ALLAH as their name for GOD.

The concern here is the manner of such translation. Here are my questions:

1.
Is it the publication is just for Christians (as outlined in the hearing), and the content will not be used to preach other non-Christians? [Adakah penerbitan itu hanya untuk penganut Kristian, dan kandungan terjemahan itu tidak digunakan untuk berdakwah kepada bukan Kristian?]
2.
Are the current Malaysian Christians do not understand that God (in English) is “Tuhan” in Bahasa Malaysia? (I’m sorry, but I have to ask this.. because this shows how good is your English and Bahasa Malaysia. :) ) [Adakah penganut Kristian di Malaysia tidak memahami "God" (dalam Bahasa Inggeris) adalah "Tuhan" dalam Bahasa Malaysia"? (Maaf, tetapi saya terpaksa bertanya.. kerana ini menunjukkan tahap penguasaan Bahasa Inggeris dan Bahasa Malaysia juga. :) )]
3.
Why the translation of God to be Allah being done now? Even though it is said hundreds years ago, why now? Why wouldn’y it be done years ago? [ Kenapa terjemahan itu dilakukan sekarang? Walaupun dikatakan sudah beratus tahun, kenapa sekarang? Kenapa tidak bertahun dahulu?]
4.
Why just the translation of God to be “Allah” just in Bahasa Malaysia”? Will it be used in other languages? [ Kenapa terjemahan "God" kepada "Allah" cuma dalam Bahasa Malaysia? Adakah ianya akan digunakan didalam bahasa lain?]

* I’ve taken the liberty of translating the questions to be answered either in Bahasa Malaysia or English.

I do hope somebody can give me an honest answer.

Show ur support with the Anti 3 in One Logo....

Azly Rahman? He's well read alright, but has captured and digested too many fundamentals and concepts of thinking in life that somewhat has confused himself.

He can't differentiate which concept is right for the Malays, which is applicable and which is not...

KDN used its legal powers to ban the use of Allah in The Herald. What other way is there but to challenge the government in the courts by exercising one's legal rights. You mean to tell me just because the word Allah is claimed to be the exclusive rights of Muslims, non-Muslims loose all their legal rights to challenge a ministerial decision.

Why is Islam so afraid of other religions converting it? Is islam not the truth? If islam is the truth in peoples' hearts no matter what muslims will keep to their god. Our God given conscience will keep us strong in faith. So why be afraid of one little mere word "allah"

Those who call themselves Malay or Bumiputra are majority Indonesian heritage! Allah is God in Arabic not Malay! Bahasa Melayu or Bahasa Malaysia consists of many stolen words from Tamil, Arabic, English and several other languages.
If we remove those foreign words from Malay Language, Malay will be a car without a steering.
Malays have planted in their mind that everything is Islam, There is no other race and religion, not even language, everything belongs to the Muslims, they are too fanatic and it is due to the culture shock that they are going through,(which the Malays are famous)"Culture Shock".
A race which lived in the jungle, bushes and along rivers in the era of 50's has seen development and religios piousness out of sudden and suffering culture shock!
there is no 'Ketuanan Melayu'too because the lineage of Melaka Sultans are Indians, not Malays. It is no secret that Parameswara was an Indian and a Hindu prince. It is clear from records that Parameswara never converted to Islam. He was anIndian Hindu who fled Palembang in Sumatra to eventually found Melaka circa 1400 AD and start the entire Malaysian royalty. Malaysia 's royalty was and is of Hindu/India origin.