Zakat money to Foundation for the Poor; Khalid is one heartless mean bastard 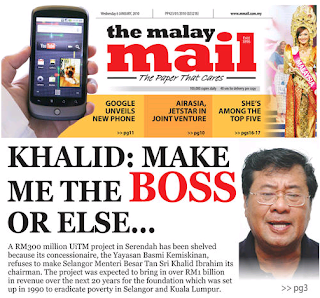 PETALING JAYA: Selangor Menteri Besar Tan Sri Khalid Ibrahim is sitting in the centre of a storm that threatens to jeopardise poverty eradication programmes in Selangor and Kuala Lumpur.

It has been revealed to The Malay Mail that the State government, in what is believed to be an unprecedented move, has directed Yayasan Basmi Kemiskinan (Selangor Darul Ehsan), an NGO set up in 1990 to assist the poor in the two States, to install Khalid as its chairman.

We were also informed that the foundation, run by a board of trustees headed by chairman Datuk Zainal Abidin Sakom, had also been told to appoint Batu Tiga assemblyman Rodziah Ismail as a trustee.

The foundation, it has been revealed, has refused to bow to the pressure. But this comes with a price: its subsidiary, Permodalan YBK Sdn Bhd, cannot proceed with developing the multi-million ringgit UiTM campus project on its 448-acre plot in Serendah.

The State government, it is learnt, had used the inability of the foundation to settle quit rent arrears that run into millions of ringgit for portions of its 1,642 land bank as a "bargaining chip" to get Khalid and Rodziah appointed to Yayasan Basmi Kemiskinan's board of trustees.

The project is estimated to be over RM300 million and expected to create spin-off revenues worth over RM1 billion.

The foundation, which has had its numerous appeals to pay off the arrears by surrendering some of its land turned down, had wanted to settle the arrears with its earning from the UiTM project, which is slated to accommodate 5,000 students.

The move to get Khalid and Rodziah appointed is set to be scrutinised as the State government has no stake in the foundation, which is an NGO.

Ironically, the foundation was set up in accordance with the Trustees (Incorporation) Ordinance, 1952, which, among others, stipulates that "the foundation shall not support with its funds any political organisation or society or endeavour to impose on or procure to be observed by its members, or others any regulations, restriction which, if any objects of the foundation would make it a trade union within the meaning of the Trade Union Ordinance".

The foundation, set up by former Selangor Menteri Besar Tan Sri Muhammad Muhammad Taib, has never had an MB as its chairman prior to this. The seat has been held by Zainal Abidin since its inception. Muhammad and Khalid could not be reached for comment at Press time.
at 1/06/2010 10:15:00 PM

The Foundation is a slush fund for UMNO. Even the head is a former UMNO Selangor Assemblyman!

Having a few Pakatan representative on board is good governance to ensure money is spent as its intended!

- Friends of Another Brick in the Wall

slush fund or not is not the issue.

the issue is whether an MB or PM/minister can insist that an independent NGO give the Chairman's post to him?

How about Sharizat getting the Sisters in Islam Chairmanship or Nazri being Chairman of ABIM and so on?