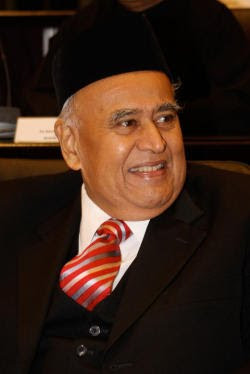 In the heat of the Abdullah administration era, they hired a legal barking dog, Zaid Ibrahim to thwart off Dr Mahathir's political attack using the Lingam case with support from the Bar Council to shame his reputation.

At around that time, the legal community were out to get even for the 1986 judicial crisis accused on him. Matthias Chang, Dr Mahathir's former polical secretary countered with an exposure on the Bar Council.

He accussed them of unethical practises and being a politically inclined self interest group. Bar Council was exposed to be in cohort with the British High Commission to lobby for several judges promotion including Gopal Sri Ram.

In his entry to the bench, Gopal also did the unethical act of lobbying the Prime Minister or some other source said was several attempt for an appointment with the PM.

The judge promoted by Bar Council as an examplry judge made a judgement against UEM in a dispute with their joint venture partner, Singapore-based Japanese Genisys. Gopal overturned a High Court judgement that awarded the decision in favour of UEM for a fraud case.

Although it was a 3-0 decision Court of Appeal decision, Gopal seemed to be the dominating judge. He wrote the judgement for himself and Datuk Hasan. Suspiciously, Datuk Zainun Ali's judgement started with the words, "I concur with Justice Gopal ..."

A clear cut case of fraud by Seow Boon Cheng in favour of UEM turned into a dispute over UEM's intended withdrawal from the Joint Venture Agreement with Genisys.

SOME RM87 million is at stake for UEM Group Bhd as the government-linked company (GLC) and wholly owned subsidiary of Khazanah Nasional Bhd faces the Federal Court on January 11 in a fight against its former joint venture partner, Singapore’s Genisys Integrated Engineers Pte Ltd (GIE).

The impending case follows an appeal made by UEM against the decision of the Court of Appeal, which had on Nov 7, 2008 allowed GIE's appeal against the High Court's dismissal of a petition for relief and had ordered that UEM purchase the UEM Genisys Sdn Bhd (UEG) shares from GIE.

In reversing an earlier High Court decision, the Court of Appeal also ordered UEM to pay GIE some RM47 million plus 8 per cent interest per annum from the date of the UEM petition, which was in April 2001. To date, this amount totals some RM87 million.

According to corporate lawyer and strategist, Khairul Anwar, the case has attracted the attention of legal practitioners not ony from Malaysia but elsewhere as well in view of a dispute between companies from two different countries.

"The case in essence is a commercial dispute between two companies, but as it involves two countries, it is now a high profile case that has attracted the attention of many parties following the judgement made by the Court of Appeal," he said.

United Engineers (Malaysia) Bhd, as UEM was previously known, and GIE established a joint venture company in 1993 with a view of undertaking mechanical and electrical contract works, and to this end capitalising opportunities for such work presented by amongst others the UEM group of companies.

The joint venture company was called UEM Genisys Sdn Bhd (UEG) where UEM was a 51 per cent shareholder and GIE had 49 per cent of the shareholding.

UEG was under the management and control of GIE with its Chief Executive Officer being Seow Boon Cheng, the controlling shareholder and director of GIE.

However, things went wrong for the JV in mid-1998 and litigation commenced in 2000 and 2001 following the total breakdown in relations between UEM and GIE.

In 2000, GIE commenced proceedings against UEM under section 181 of the Companies Act. This is a specific provision that empowers a High Court to make appropriate orders on a petition by a shareholder.

These include ordering the company in issue to be wound up as well as to order a buy-out of the shares by the other stakeholders.

In 2001, UEM in turn commenced proceedings against GIE under the same section of the Companies Act.

The case was first heard in the High Court and after 50 days of trial, it had in October 20, 2005 found in favour of UEM where the court had also ordered that UEG be wound up.

GIE then filed an appeal with the Court of Appeals and won the case.

Now UEM will hear the outcome of its appeal with the Federal Court on Jan 11. - Bernama

The Star's column by Errol Oh below:

Many are following UEM court case

IF you are at the Palace of Justice in Putrajaya on Monday morning, you may spot more reporters at the Federal Court than there normally are. If that’s so, it has to do with a case that pits UEM Group Bhd (once known as United Engineers (M) Bhd) against Singapore’s Genisys Integrated Engineers Pte Ltd, a former business ally.

Over the week, several news reports and at least one feature story have trained the spotlight on what had begun as essentially a commercial dispute, but has developed into a courtroom battle with the makings of a legal milestone for the business community.

Furthermore, on Friday, a public relations firm has sent an advisory note to media organisations to alert them about the Jan 11 “face-off at Federal Court”. It’s perhaps no accident that the heading reminds you of a boxing match – “Malaysia’s UEM vs Singapore’s Genisys, RM87mil At Stake,” it reads.

The image of two companies, one linked to the Malaysian Government and the other from across the Causeway, slugging it out before the highest judicial authority in the country, with millions of ringgit on the line, is bound to grab our attention.

It has been a while since our business pages had featured a civil case involving non-listed companies. Clearly, there are people who believe that the outcome of the UEM-Genisys feud ought to be highlighted because it could have broad implications. They may be right, and it’s not just about the money.

First, some history. As then Court of Appeal judge Datuk Gopal Sri Ram – he is now a Federal Court judge – wrote in his July 2008 judgement, “This case is about a joint venture gone wrong. There is now litigation about it.”

UEM and Genisys, a mechanical and electrical engineering company controlled by group managing director Seow Boon Cheng, teamed up in 1993 to form a joint-venture company called UEM Genisys Sdn Bhd (UEG), with UEM having a 51% stake and Genisys owning the rest of the shares.

The idea was for UEG to undertake mechanical and electrical contract works, particularly for projects handled by companies in the UEM stable. Seow was also appointed chief executive officer of UEG.

The ties between the two UEG shareholders deteriorated badly for various reasons – it depends on which party you talk to – and both (Genisys in 2000 and UEM the following year) presented petitions for relief under Section 181 of the Companies Act 1965, each accusing the other of acting oppressively.

Under Section 181, a shareholder can apply to the High Court for an order to remedy the situation if it can be established that the company has been run in a way that’s oppressive or prejudicial to the shareholder.

In offering a remedy, the court has the following options:

● direct or prohibit any act, or cancel or vary any transaction or resolution;

● regulate the conduct of the company’s affairs in future;

● provide for the purchase of the company’s shares by other shareholders or by the company itself;

● in the case of a purchase of shares by the company, provide for a reduction accordingly of the company’s capital; or

● provide that the company be wound up.

The two petitions were consolidated and heard together by the Kuala Lumpur High Court, which dismissed Genisys’s petition but granted that of UEM. The High Court also ordered UEG to be wound up. Genisys appealed against both decisions and the matter went to the Court of Appeal.

The Court of Appeal also ordered UEM to buy the UEG shares owned by Genisys, with the valuation based on UEG’s audited accounts for the year ended December 1998. UEM is also required to pay interest on the purchase price at 8% per annum from April 13, 2001, the date of the presentation of the UEM petition.

It was reported in May last year that UEM had to deposit RM47.3mil in a stakeholder’s account as a condition to obtain a stay of execution against the Court of Appeal ruling. The amount represented the purchase price for Genisys’s 49% shareholding in UEG.

With the 8% interest worked in, UEM will have to fork out about RM87mil if it has to buy out Genisys. In June, the Federal Court granted leave to UEM to appeal against the decision of the Court of Appeal. This brings us to a decisive Monday, when the Federal Court will hear the appeal.

Business journalists here rarely look at court decisions, but now that the UEM-Genisys dispute has come to our notice, it is a fine opportunity to appreciate the role and impact of the judiciary in our lives, including in how business is structured and conducted.

The outcome of the UEM appeal will be of interest to many in the corporate, investment and legal circles because it is likely to have a bearing on future treatment of shareholder disputes that go to court, particularly those that rely on the Section 181 provisions.

The hope, of course, is to see more clarity and definitiveness to the many issues of the case. Maybe it’s too much to expect a tidy and satisfying conclusion to the long-running legal battle, but at least, because we are paying attention this time, this will be one important court ruling that will not just slip past us.

● This case reminds deputy business editor Errol Oh that some court decisions have a deeper impact on the business world than many of us care to realise.

Further comment will come after the judgement. Something smells really fishy.

This blog have in the past taken UEM to task and is still waiting for the "all-is-settle" claim in the UEM Qatari lawsuit. This time around it is about injustice against UEM.

It is not about managemnt issues or Khazanah management but a legacy issue in which the process of justice system may have been tampered with. It may involved the judges at the Court of Appeal level, in particular Gopal Sri Ram. This judgemnt is not only about UEM and Genisys only but judgement on Gopal Sri Ram.

A piece of crumb from a RM87 million pie could be quite a comfortable size for anyone. Don't you think so?

If the litigation was done in Singapore, would the result be this flip-floppy ;)?

Nowadays not only switch and slippers can flip flop! I do respect the due process of law but like you said, this is fishy.