Be gracious Zambery; Neither a NSTP nor a Singapore be 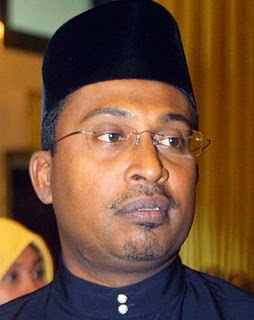 In the midst of the uproar over the court decision to allow use of Allah for the Malay edition of the Herald - Catholic Weekly, another news was taking the attention on Monday.

Perak Menteri Besar, Dato Dr Zambery Abdul Kadir announced he will sue Suara Keadilan for their slanderous fiction of Zambery being held back at the US Immigration under susoicion of terrorism.

He claimed he had initially thought of suing for a nominal amount of RM1 or 5 sen. But decided to emulate Anwar's favourite amount of RM100 million in his string of lawsuits.

That is exactly the point.

Zambery, who used to be Anwar's supporter, benefactor and was even held under ISA for a brief moment during the hey days of Reformasi, should not emulate him.

With friends such as Ahmad Talib, Zainul Ariffin, Nuraina Samad, Firdaus Abdullah, etc in charge of editorial, why the pursuit? Is the Hindu God and Muslim priest people still holding the helm of leadership in NST?

Since we are talking of Kalimullah, we are also talking of an Singapore intelligence operative that Tun Abdullah allowed in to lead NST and infiltrate into the corridor of power. Singapore is known for surpressing press freedom by suing them to the bone.

That is from where Lim Guan Eng and other DAP politicians get the example to sue Utusan Malaysia. While, the idea to ban Utusan Malaysia from his press conferences was copied from Anwar Ibrahim's ban on Agendadaily and Utusan Malaysia. PAP has a historical sore point with Utusan Melayu.

Having presented all the parties pursuing to sue media, Zambery should not do it and get himself into such unsavory company. Let's not do unto other what we do not wish it to be done unto you.

The argument to sue may perhaps seem justified. Suara Keadilan is not there in the US with Zambery at the Immigration point. How are they to know of such events? It is great to get even and send the right message to Zambery's true nemesis, Nizar.

In the final account, if the event did not happen, it doesn't happen. Zambery can clarify that. He should wait out to see Suara Keadilan print his denial.

Lawsuits by politicians on media does not really tip the Barisan Nasional symbol in the middle. As a Menteri Besar, Zambery have every chance of getting coverage by mainstream media.

And, it is very DAP to claim to pursue civil libertarianism and yet supress deviating views. Malaysia Today and The Malaysian Insider takpa?

MB To Sue Tabloid For RM100mil

Perak Mentri Besar Datuk Seri Dr Zambry Abdul Kadir will file a RM100mil suit against PKR party organ Suara Keadilan over an article which he has described as libel of the extreme kind.

Dr Zambry said he had discussed with his lawyers about taking legal action against the tabloid for publishing the article which was devoid of journalistic ethics and news reporting principles.

He said the newspaper should be more responsible in its reporting to reflect the credibility of PKR, which was said to be fighting for justice and truth.

“This newspaper committed a big lie when it reported that I was hauled up at the San Francis­co Airport in the United States on suspicion of being a terrorist and that I was forced to return to Malaysia.

“I don’t know who their sources are but the report is not true. It’s a total fabrication,” he said.

“Initially, I wanted to sue the newspaper for RM1 or five sen, but considering that the party leader loves to sue people for RM100mil, so why shouldn’t I sue them for RM100mil, too?” he said after participating in a gotong- royong programme with the Ipoh City Council in Kampung Tai Lee, Buntong, Ipoh yesterday.

Dr Zambry said he had never taken any legal action against the tabloid, which had called him names and published false reports to discredit the state government led by him.

“But when the lying became extreme in their latest article, it’s time for me to act,” he said.

I disagree.Must sue to stop the lies.

all of Kalimullah's henchmen are still there in NSTP brader.. the lame syed nazri, his good-for- nothing deputy Kamrul, kali-brandan appointed executive editors, the ever missing chief news editors, parachuted asssitant editors and on top of it all a neo-liberal group managing editor who is bent on giving more space to DAP and PKR. the board chairman is kali's man through and through ..
god bless the Prime Minister.

I beg to differ sir, let him sue sir.

So in this matter aku setuju dengan Zambry and pls let the court decide!

Despite we hv friends in the editorial, it is the BOD which decides on whether or not to pursue this what-seemed-to-be-very-ugly fight between friends.

The BOD, is surprisingly a reminisence of Pak Lah Al-Flip-Flop'py and Riong Kali's legacy, which NST should really work hard to undo.

PM Najib should really look into this. He needs more friends to come together and help his cause, rather than going against each other's blood, mercilessly.

No, its not okay to have a "Gunfight at OK Coral".

Zambery does not need to seek publicity. He can get his space in the media.

Zambery is not rally newsworthy material. I feel he needs this small bit of publicity to make himself relevant and important.
Examples of newsmakers are people like Nazri Aziz, RPK, Mahathir. NST tries hard to make news of Zambery by depicting him as Pangkor Pele. But you know the state of local football. So, in my opinion, the RM100m does give him some bit of publicity. But I'm curious, he only needs to show his passport to prove that Suara Keadilan lied. Why didn't he?