Bought and sold by rating agencies

On October 30, Fitch Ratings ignored government's steadfast effort to reduce fiscal deficit and the planned introduction of GST for 2015 as announced in the 2014 budget presented to Parliament to maintain a negative outlook for our foreign and local bonds downgraded in July. [Read FMT here]

Someone up there must be fuming thus for an article distributed to bloggers and media entitled "From stable to positive" to counter Fitch rating with Moody's latest upgrade. To them, government had heed warnings from Fitch by taking various necessary drastic steps like reducing subsidies.

When Moody raised Malaysia foreign bond to A3 and local bond to A1 from 9 categories of rating Aaa, Aa, A, Baa, Ba, B, Caa, Ca and C and effectiveness rating of 1, 2 or 3, it is acknowledged as positive re-rating. Minister Dato Abdul Wahid Omar (AWO) gloated with joy and called Fitch the "number 3 rating agency".

They have never governed a country or managed an economy or probably run a company, but the Minister seemed to be bought and sold by these rating agencies. 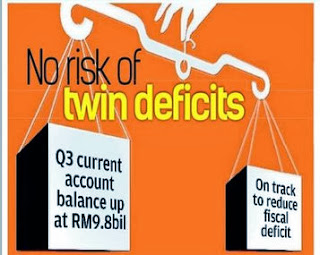 Before commenting further, let us allow the Minister's words be heard first.

Malaysia Digest here highlighted that "Malaysia is not at risk of twin deficits, as the country is expected to maintain a healthy current account surplus while being on track to reducing its fiscal deficit,"

Given the fact that Malaysia was forecasted to have financial problems in the midst of repeated attempts to destabilise the government, Moody had taken positively government steps to raise fuel prices positively.

And the article being distributed claimed more accolade like reducing deficit, latest 5.15 growth rate figure, 5-year private sector investment increase of 17%, etc. They coined the argument that Malaysia's 5.1% GDP growth is the highest among the A rated countries.

Not to be left from the compliment is Bank Negara Malaysia's efficient policies.

For the moment, Australia and Indonesia is partly affected by the slowdown in China and the article expressed confidence government would take necessary steps.

We trust they would.

Our economic planners should take heed also that the positve rating still come with challenges. Only Moody is confident but Fitch prefer to wait and see the China factor first.

Thus it raises the first issue of government is being so concerned with the rating agencies.

In The Sundaily report, Positive but not without challenges, World Bank senior country economist for Malaysia Frederico Gil Sander gave a word of caution.

"There are still momentum and investments (here), but headwinds in the domestic economy especially with the pace of the fiscal consolidation, how it will affect households, as well as the tapering of the US Federal Reserve (Fed) monetary policy will affect interest rates and investments next year."

Not that we should take the words of a World Bank/IMF economist wholeheartedly, but the message is caution of rating agencies.


Does government have the resolve and mixture of policies to handle public outcry? Already government seems directionless in handling the outcry from following the rating agencies' recommendations to raise fuel prices, sugar prices, excessive wastage in government, etc. 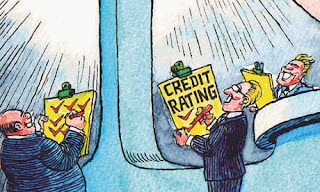 Former Chief Economist for Bank Islam and now Institut Rakyat's Economist, Azrul Azwar Ahmad Tajudin may have a set-back for his stupid forecast but the general principle he raised is something of concern.

Government should be doing what is necessary for the country and rakyat, particularly the less fortunate masses and not so much to satisfy rating agencies.

In the midst of currency crisis, Tun Dr Mahathir never gave a damn to what the IMF and anything related to the system like rating agencies. He did what he need to do to save the country. He dispelled all conventional economic theory and down the road, he came out right.


Not only are we trying to satisfy the rating agencies, the goverment is emulating them.

The government, though MARC is considering of forming a multi-national rating agencies as an alternative to the Big Three of Standard & Poors, Moody and Fitch. [Read The Star here]

No one seem to bother to remember that back in 2008-09 the rating agencies were blamed for the meltdown in 2008. Only The Star gave a mention in an article, Better sentiment towards Malaysia?" in the introduction but they message is we have no choice but to live with them.


THE “Big Three” credit rating agencies – Standard & Poor’s (S&P), Moody’s and Fitch – may have suffered a serious dent to their credibility in recent years, especially after the outbreak of the 2008/09 global financial crisis; but, like it or not, this small group of international organisations will continue to play an important role in the global debt market.

Their assessments of the creditworthiness of corporations and governments continue to be taken seriously by investors, and their decisions could affect the cost of borrowing, that is, the interest rate that corporations or governments will have to pay investors for buying the bonds that they issue.

It is estimated that the Big-3 credit rating agencies currently command a collective global market share of 95% by revenue, with S&P and Moody’s leading with a market share of 40% each, and Fitch with around 15%.

As it stands, all the three key rating agencies now have differing outlooks for Malaysia.

Moody’s has a “positive” outlook for the country following a revision over the week, while S&P has the outlook maintained at “stable” and Fitch at “negative”. 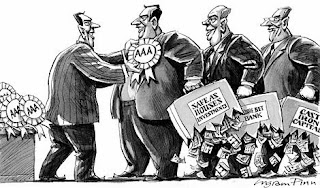 For the three, The Guardian had reported here in 2011 that Moody's former boss revealed rating agencies's 'conflict of interest'. Extract below:


Harrington, who worked at Moody's for 11 years until he resigned last year, said ratings agencies suffer from a conflict of interest because they are paid by the banks and companies they are supposed to rate objectively.

"This salient conflict of interest permeates all levels of employment, from entry-level analyst to the chairman and chief executive officer of Moody's corporation," Harrington said in a filing to the US financial regulator the securities and exchange commission (SEC), which is considering new rules to reform the agencies.

Harrington claims that Moody's uses a long-standing culture of "intimidation and harassment" to persuade its analysts to ensure ratings match those wanted by the company's clients. He says Moody's compliance department "actively harasses analysts viewed as 'troublesome' " and said management "rewarded lenient voting". 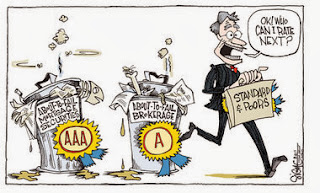 In the video, Senator Carl Levin revealed rating agencies are not independent of their fees, and massaging numbers in a conflict of interest to meet interest of Investment bankers:


In the video published on february 2013, Standard & Poor's is facing lawsuits for fraud by inflating mortgage ratings between 2004 and 2007, helping fuel the financial crisis.


The video below, is a Bloomberg news report of a class action lawsuit against Moody's:


The video below is a 2010 recording revealing financial terrorism committed by Fitch to force ECB to buy 'hundred of billions' of bonds to tame Europe's debt crisis in collusion with hedge fund manager.

There are lots of other You Tube video and articles on rating agencies scandals out there on the Internet. In fact, in February this year, Time magazine wrote a poser: Is It Time to Rethink the Role of Ratings Agencies? 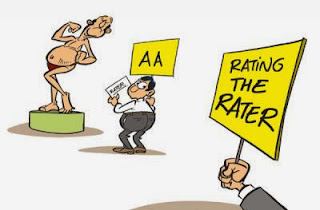 Yet, when the Malaysian government wants to sell it's bonds, international purchasers demand ratings of the bonds to be done by the international rating agencies.

Can the government flog an unrated sovereign bond to international fund managers and investors?

I don't know the answer, but it would be an interesting experiment to carry out!

Salam Bro.,
Your posting should bring the much-needed levelheadedness to AWO and the CON-sultants in najib's stable... focus on the what could/should be done in terms of real economy for the rakyat lah...
But then again, I bet they aren't reading this posting...

You are stating the obvious. Just learnt about International Bonds?

Manage the economy properly and the ratings will come. Don't manage based on instructions of rating agencies and Wall Streets.

Wonder what what is the rating for the world's biggest debtor nation?

Ah, yes. And how would you define "managing the economy properly"? Eliminating the budget deficit? Restructuring the economy to higher value-added productivity? Bringing in FDI that matters instead of any old FDI?

And to answer your question - the US still has a triple-A rating.

Why does Bank Negara still have US Treasury Bonds in it's portfolio?

Rating agencies analyse on the past. Analysing laggard economic data and is not up-to-date or have forecasting ability.

How come EPU Minister does not understand that?