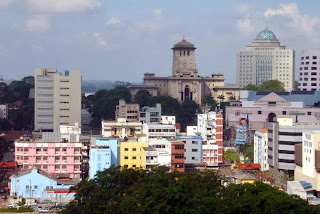 Such news usually becomes the talk of Johor. Unlike other states like Pahang and Melaka, the award of Johor Datokship is far and few but periodically there will be Datokship retracted. The last was Datok Chua Jui Meng (still has another Dato from other states.)

Hamsan was the District Officer for Pontian and Batu Pahat from 2005 to 2006, before assuming the position of Director, State Economic Planning Unit in 2006. He was appointed CEO of YPJ from 2011 till today.

Secretary for the Johor Royal Council (or Majlis Jumaah Diraja Johor), Datuk Abdul Rahim Ramli explained that his Highness the Sultan of Johor has the sole power to retract honours given to those who failed in their duties and responsibilities.

Although it is not uncommon to hear the stripping of Johor Datokship, the announcement would attract speculations in Johor and among Johoreans outside Johor.

The mere mention of Hamsan's postion as CEO of YPJ brings about an often much talked amongst Johoreans claiming to be in the know of the current state of the scholarship foundation.

YPJ was established in 1982 for the purpose of consolidating the various scholarship programs of the state government in existence since time immemorial.

In his youth, our late father was a potential recipient to study at the reknown Al Azhar but aspiration of a son of a kampung school headmaster could be easily derailed by an influential Syed from a merchant family.

During the Menteri Besar-ship of Tan Sri Muhyiddin Yassin, the plan was for YPJ to be self sufficient with a holding company, business to generate profit and cash, and was awarded land as asset to be developed and generate income. [Read here.]

Then came the Kumpulan Prasana Rakyat Johor (KPRJ) debacle under now Tan Sri Gani Osman and after the bailout by Tan Sri Lim Kang Ho, the land and money under YPJ was believed to be channeled to Kang Ho's companies or related companies as compansation.

It became a sore point to Johoreans in the know when YPJ stopped providing scholarship and financial assistance to qualified Johorean Malays and it's landbank stripped off.

Off course, this is the talk among Johoreans claiming to be in the know. If it is not true, those in the know should clarify.


The stripping of Hamsan's Datokship will not likely to be linked to his position in YPJ and the debacle originated from KPRJ.

As one source from Pasir Gudang claimed it had to do with his days in the state EPU and the privatisation of Johor's famous state government-initiated sekolah ugama program and linked to the state zakat fund.

One of the asnaf (rightful beneficiary) in the distribution zakat (tithe) is for education. Traditionally, part of the fund for education collected from zakat is channeled to the sekolah ugama under the administration of Majlis Agama Islam Johor (MAIJ).

The privatisation for the building of 121 sekolah ugama was awarded to a joint-venture entity between MAIJ and a chap said to be orang Gani by the name of Md Seth Md Ali. This was the guy given a major IT project during Gani's time under a company called Mysys Development Sdn Bhd.

In a year, the zakat fund channeled to sekolah ugama program is RM4 million a year but supposedly, MAIJ had deposited 10 years advance of the zakat allocation of RM40 million to the JV company . How it could be done is mind-boggling.

Murphy's law state that when something was to go wrong, it will go wrong. More accurately, when something is done wrongly, the whole thing will fail. The sekolah ugama privatisation was described to have failed.

This would mean some RM40 million zakat money would have "disappeared" and the financially strapped sekolah ugama would be in further dire straits, thus needing a rescue. The nationally reknown sekolah ugama system of Johor is facing problems of poor quality of teaching, severely underpaid teachers, and inadequate facility to cope with raising needs.

This was speculated to brought out the wrath of the Sultan. Many years ago, there was a former district officer of Batu Pahat that had his Datokship removed for some indiscretion relating to zakat when heading the then Jabatan Ugama Islam Johor.

Presumably, the privatisation of a state government program would have undergone through various committees scrutinisation and several level of decision making process, thus it could not be made on the discretion of one man, be it a state EPU Director or Menteri Besar.

In most cases, the stripping of Datokship is only known to his Highness personally. Some cases like that of Chua Jui Meng and Sharifah Mazlina Syed Abbdul Kadir has to do with some disrespectful act.

Such speculation can be expected from the circumstances leading to the end of Gani Osman's Menteri Besar-ship.

One speculation had to do with exposure on the manouvre of Kang Ho in the restructuring of KFC and Iskandar Waterfront to the detriment of his Highness. Although Gani's departure was planned, rumours related to the deals could still be alive.

TERM EXPIRES DEC 31: Leaving to pursue opportunities outside the group 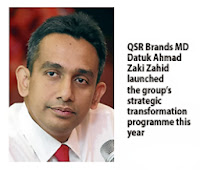 Zaki's term as managing director of QSR will end on December 31 this year, although his last day in office will be much earlier on November 30, according to an internal email to the staff seen by Business Times.

Zaki, however, could not be contacted to verify the authenticity of the email.

Zaki told his staff that he is leaving to pursue opportunities outside the group, which is the owner and operator of the lucrative KFC and Pizza Hut fast food chains.

According to the Article of Association, Sultan's consent and approval is sought after for major appointment in the state's business vehicle, Johor Corporation. Does it mean Zaki is no more favoured and is being replaced?

Zaki was the preferred choice of his Highness Sultan Johor to lead Johor Corporation and was appointed into several of it's public listed vehicles in November 2011. Before assuming his position in Johor, he was appointed Deputy Chairman of MRCB in 2009. [Read Rocky Bru past postings here and here].

Talk is Ghani's former Special Officer in IRDA and promoter of super liberal NGO (registred?), IDEAS, Wan Mohd Firdaus (or being called Wan MF in close circle in Johor Baru) has resigned from the Board of Directors of Kulim.

In a simple punching of the keyboard, it looks to be a royal purge to cleanse inefficiencies and leakage in Johor which is good and a much welcome news to the rakyat of Johor. The Sultan has expressed his aspiration to see Johor - the state, government and rakyat - benefit from the massive development planned for Iskandar and the ensuing investment.

Purge or not, Chinese will have their ways in every decision made. Melayu tak ada duit.

Honestly, I don't know whether to laugh or to cry reading this posting. Well, no point in telling you what I know about this whole thing because it's obvious that you had made up your mind about all this. But just in case you got some curiosity to check from other sources than those from Pasir Gudang, try to find out from an independent source how Kuwait Finance was convinced to provide the loan for the "Ghani's crony" to carry out the sekolah agama project. Check properly my friend, because this involves sekolah agama, kalau terfitnah orang yang tak bersalah, tak ke nyaya. Jangan dengar sebelah pihak punya story saja. Itu perbuatan tak adil. Also find out how the State government plans to remove the present developer and who will take over the project and how it's going to be financed. As for the royal purge, I think the effect can be seen in GE14 a few years down the road. Let's see how the Pasir Gudang administration performs...and how Johoreans like the new set-up.

Since when has education been stratified as such?

As for business dealings in Johor, Johoreans are not blind and dumb.

They have seen for themselves the many debacles, white elephants and abandoned projects in Johor Bahru and in the rest of Johor state.

So why focus on Lim Kang Hoo and his corporate moves?

Surely there are other billion ringgit projects in JB and greater JB that should put under the microscope?

Or are these somehow "verboten" and to be avoided?

This is all drama - everyone in the market knows the most preferred developer in town is Country Garden from China.

The monarch should reflect on himself before talking about other people's misdeed. Rakyat tak perlu dihasut, rakyat memang dah menyampah.

@anoymous #1, their duit is useless being boat pepole.

we let them stay here like we let cows stay on the farmland, to be of some use.

Ah, yes - do you know how many Iskandar property developments are being advertised daily in the Singapore Straits Times?

I suppose that at an exchange rate of 2.54 to 1, affordability shouldn't be the major concern to the targets of these ads?

And since you have blogged about recent developments in Johor, why don't you turn your microscope on subjects like the following: proposed Third Link, proposed extension of the Singapore MRT system to JB and Iskandar, proposed high-speed rail link between Singapore and KL (with stops in Johor), possibility of "twinning" between Changi Airport and Senai Airport and Khazanah-Temasek property development in Iskandar?

And contrast these with the concerns of the rakyat in JB and greater JB - such as crime, safety and security, the lack of an efficient public transport system, public hospitals and clinics that are bursting at the seams, public housing schemes that have gone awry...the list goes on.

Very informative blog. I just stumbled upon this blog and will continue to read.