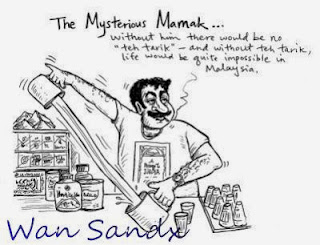 The cartoon clip above claim that without the mysterious mamak, "life would be quite impossible in Malaysia." That could be reworded and still remain true as these mamak shop made life impossible.

In our last appointment with the doctor, he raised concern of our weight. He asked the time of our last meal. Our's is usually around 8-9 PM.

However, we did tell that we had a past bad habit to go for late night teh tarik at mamak shop that could stretch till the wee hours in the morning. Early in our working life and after being abroad for a long time, we had this bad habit of having nasi lemak every day.

The doctor's question reminded us of an NST article few days ago about 24 hours eateries.

Consumers Association of Penang president S.M. Mohamed Idris called on the authorities to not allow eateries to operate round-the-clock to check the rising cases of diabetes and obesity. These eateries serve food with high in fat, salt and sugar content, plus people tend to overeat.

For a start, how about tightening the operations of mamak shop. Would SM Idris agree to tighten up on his fellow "countrymen"?

The view of SM Idris could be expanded further to limit opening hours of shops, shopping malls, and commercial premises in the city. Unlike other cities in Europe and US, shops in Asian cities tend to open up late into the night.

That way Malaysians would lead a healthier "early to bed and early to rise" lifestyle. To a certain extent, it could contribute to solve a lot of other problems.

The NST article is below: 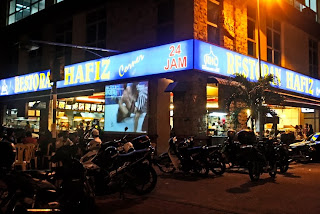 GEORGE TOWN - The authorities should not allow eateries to operate round-the-clock.

Consumers Association of Penang president S.M. Mohamed Idris said the move was necessary to check the rising cases of diabetes and obesity.

"With food, especially with high fat, salt and sugar content, available round-the-clock, many people tend to overeat for supper.

"This has led to a rising number of overweight people and diabetics," he said yesterday.

Idris said the authorities should limit operating hours of eateries to 9pm daily.

Food high in fat and salt content as well as soft drinks and other beverages which have high sugar content should be slapped with taxes.

He said the government should take a leaf from Mexico where a 50 per cent tax was imposed on all carbonated drinks.

He said the authorities should also disallow vending machines selling soft drinks, sweets and junk food in schools and hospitals.

"Obesity among Malaysian children is worrying as overweight kids are a common sight (these days)."

He said data from research groups indicated that about 15 per cent of toddlers and preschool children were overweight or obese.

"Thirty per cent of primary schoolchildren are obese."

Idris said diabetes among children was often overlooked or misdiagnosed.

"It can strike children of any age, including toddlers and babies. If it is not detected early, it can be fatal or can cause brain damage."

The suggestion, however, was met with derision from 24-hour eatery owners.

Abdul Aziz Shik Ahmad, who owns a nasi kandar restaurant, said it was a person's right to eat at whatever time.

"Not everyone works from 9am to 5pm.

"Some people only get to have their meals late at night. We are merely food providers.

"Contrary to popular belief, nasi kandar dishes are not sold late at night.

"Most people only have toasts and drinks at that time."

Not withstanding the needs of those not working outside the 9 to 5, is it the rights of these mamak shop operators to be one of the biggest and oldest consumer of foreign workers?

These mamak shops have long been the conduit for immigrant Indian labourers to work till it is time for them to "balik negeri." Their traditonal business model of low cost and fast service is dependent on foreign labour.

Malaysia had always been under populated and dependent on immigrant workers.

That was why the country is mutiracial. Before the world wars, the Chinese came as tin mine workers and Indian came to work in the estates.  The local population was not "lazy" or refuse to get out of their comfort zone, but immigrant workers was easier to control for the colonial capitalist. 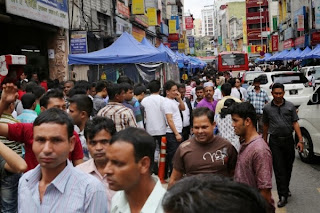 However, our dependency have created much problems.

Malaya had to grant one million citizenship to immigrants and their local born children before British agree to our independence.  Currently, foreign labour have come to the point the remittance of foreign labour has increase drastically in the last few years and created social problems.

Home Office announced plan to allow another one million Bangla Deshi to fill up the pantation needs. One will expect total number of immigrants to rise from current estimate of 2 million to more than 3 million to account also for Indonesian, Nepalist, Phillipino, Indians, Burmese, etc.


It is a common phenomenon for countries in transition from 3rd world to developed status to dependent on foreign labour to fill up the needs of the economy.

However, it is not accurate to blame foreign labours as taking up local jobs. The problem of 76,000 unemployed graduate has no correlation to foreign labours. They are not economic substitutes.

The reason is local is not interested to take up the work of these foreign labours and employers are not supportive enough of Najib's high income policy to increase cost.

Salary and wages of businesses in Malaysia are usually kept within 30% of revenue and Dato Idris Jala's ETP presentation forecasted it at 20%, which is a too low compared to most countries, particularly developed countries.


Foreign labours have been blamed for rise in crime in this country.

The recent killing of Bank workers by an Indonesian working with a local security have brought public uproar. There is a rise in security conscience in this country since the incursion by southern filipino into Lahad Datu and the recent abbduction of Taiwanese tourists.

One way is to blame the authorities, particularly immigraton. But, government have put in place the procedures and the necessary monitoring and enforcement.

Lower personnel in the Immigration Department blame corruption by their superiors for some short circuit in the process of approvals. True or false, it could happen and it is the gullible human soul of government officers succumbing to the temptation of corruption. 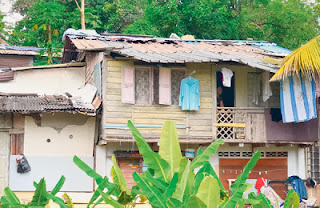 To be fair, we bring in the immigrants to work but did not provide them decent living space. We only complained of immigrants creating immigrant ghettoes in our forest reserves. Immigrants ghettoes tend to be the hotbed of criminal activities.

We complain on the presence of immigration children in our schools, public hospitals, public transport and public facilities. But we depended on them.

And, we regularly visit mamak shop for our teh tarik fix.

The part on crime has also something to do with the problem of cities and urban centrres that never sleep. Most criminal activities related to entertainment like massage parlour, night clubs, illegal gambling, prostituition, etc. operates at night till the wee hours in the morning.

Which ever is the chicken or the egg, shops and establishments like mamak shops that stay open till teh wee hours arise is inextricably linked to the existence of criminal activities.

Parents should be concerned of their children's habitual lepaking till the wee hours in the morning at mamak shops.

In the recent spree of gangland war, there was several incident of murders that occured at teh tarik drinking spot. On this part, we are not ready to advocate the shorter opening hours of mamak shops based on the argument to reduce gangland shooting.


The better arguments are health, foreign labours and economy.

The simplest route to achieve a high income economy would be to increase the preportion of the GDP by income to GDP by salary and wages.

Otherwise, businesses have to spend and invest to increase productivity to justify the higher salary and wages vis-a-vis lesser number of workers to maintain low overall cost of salary and wages. 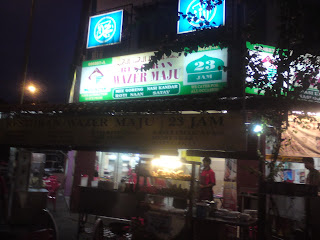 That too our businessmen are reluctant to do.

Mamak shop is dependent on foreign labour and are too kedekut to spend and invest to change their business model. Thus, the vehement demand for foreign labours by mamak eateries.

One option left would be to limit the hours open of mamak shops. That way they use less foreign labours and does not need to have two to three shifts of workers to maintain their 24 hours operations.

Not only we reduce dependence on foreign labour, we could reduce unproductive time, have a healthier population, lessen late night unsavory activities, productive time for our children, and rationalise subsidy without having to cut sugar subsidy.

When people sleep early and not go for late night mamak teh tarik, they reduce sugar intake and indirectly lessen government's subsidy burden.

Off course, we are not serious in the last argument. Just to attract Idris Jala's attention. Who knows, he could be crazy enough to take it up without realising the dependence of our economy on domestic demand.
at 11/20/2013 10:06:00 AM

I think your issues is not about mamak shop.

Agree with CAP and you.

Should limit all mamak,warung,foodcourt and other eateries biz hour until 12 only on weekdays and until 2-3 on weekend due to bola disco dangdut and karaoke fans.

Gomen should give a try for 6 months and monitor the statistic on health and social problems..

Dulu pun ada mamak but they dont operate 24 hour. Those days there are few cases of health and social matter due to these eateries...

u hated mamak so much eh?

I think this is ridiculous. If the people wish to have a healthier lifestyle it should come from with in. This is the case of supply and demand. Im no mamak thus I can't own a mamak restaurant but the article and the suggestions to me is as dumb as Shahidan kassim plan to ban Facebook. Good lord everything is about self restraints and good judgment . Malaysian should educate ourselves not only in this issues but on all of our judgement. We are angry when we being label as dumb but we need the government to make silly decision like this? Allah save us all.Pakai la otak yg Allah bagi. Government stay out of silly things and focus on actual issue.The Lizard king is now active again economy grow around 5% despite the amount paid to the consultants. Educate us please .Issue like TPPA that you have been highlighting is an excellent example of good information and education to us Malaysian