In agreement with Bukit Katil

The issue of spying by the American and Australian intelligence networks is spiraling to another level. This time it had implicate Singapore. Wisma Putra had summoned SIngapore High Commissioner yesterday to explain.

It is no more use of embassies or High Singapore's Straits Times or long suspected spies like Dato Kalimullah gathering intel information. Dutch newspaper NRC Handelsblad revealed Singapore is an important link in the international surveillance network by US National Security Agency (NSA). [Read on in Just Read here. and Bigdog here.]

In concurrance with Putera Merdeka, we agree with Bukit Katil. On matter of national security and sovereignty, partisanship should be cast aside and all should be united. While the executive deal through diplomatic channel, Parliament could make a stand as another branch of government under the separation of power.


....someone up there chickened out to reject the motion.

KUALA LUMPUR, Nov 26 — Dewan Rakyat Speaker today rejected an opposition-moved motion to scrutinise American spying activities in Malaysia, saying that the matter was of no urgency as Putrajaya had expressed their displeasure to Washington.

Tan Sri Pandikar Amin Mulia Amin said he found no reason for the motion to be debated as the Foreign Ministry had already issued a letter of protest on the incident.

“The motion is of public importance but to debate it .. I do not find the matter of urgency as the government had already issued protests letters on November 1,” he told the Dewan Rakyat here.

In the motion, submitted by PKR Bukit Katil MP Shamsul Iskandar Mohd Akin, the opposition lawmaker said the spying activities involving the US, Australia and now the latest information of Singapore’s involvement, merit an urgent debate.

Speaking to reporters outside the Dewan Rakyat, Shamsul said in the two letters of protest sent to the respective embassies here, he had argued that Najib has failed to display leadership amid growing calls for  firm action against the three governments.

“This is a very serious matter that involves the sovereignty of the country. There should be a limit to our diplomatic relations and this is a breach of trust,” he said.

Amid public outcry and strong calls for action, Najib had said two weeks ago that Malaysia will not tolerate any spying on its land.

Wisma Putra claimed it had summoned the American and Australian envoy for explanation while letters of protest had been submitted to the respective consulates.

And in the latest revelation on the spying saga, Singapore High Commissioner Ong Keng Yong will be called in today to clarify allegations that the island republic is aiding the US in spying on Malaysia.

Describing Singapore as a “good friend and neighbour”, Foreign Minister Datuk Seri Anifah Aman denounced the latest revelations by US intelligence whistleblower Edward Snowden implicating the island republic, saying that if they are proven to be true, it is a “serious matter that the government of Malaysia strongly rejects and abhors”

Opposition Leader Datuk Seri Anwar Ibrahim, however, felt that Putrajaya’s reaction was still subdued as countries like Brazil and Germany, went as far as refusing meeting with the US president.

“What we want is for Najib to act tougher and send a strong protest to Washington, not only by sending letters to the local embassies,” Shamsul said.

A red-faced President Barack Obama has vowed to “review” its spying procedures following outcry over the issue.

Analysts, however, remain sceptical that Pentagon would make any alteration to its espionage policy.

The report cited information disclosed by former US Central Intelligence Agency whistleblower Eric Snowden, saying that signals intelligence collection occurs at Australia’s High Commissions in Kuala Lumpur and Port Moresby in Papua New Guinea, as well as at its embassies in Jakarta, Bangkok, Hanoi, Beijing and Dili in East Timor.

Snowden had revealed earlier a top secret map showing 90 US electronic surveillance facilities worldwide, including in its embassies in Malaysia, Indonesia, Thailand, Cambodia and Myanmar.

No such facilities, however, are located in Singapore, the United Kingdom, Australia, New Zealand and Japan, according to the map dated August 13, 2010.

There could be speculation arising from the rejection that the leadership are either scared at angering the Americans, Australians and Singaporeans or they are now close allies with them.

This action presents a perception problem and negate the effort to expose Anwar's links with covert American operations.

How are we to convince the public of the opposition's close association with foreign covert operations to destabilise the government through people revolution? It will be difficult to convince the public that Anwar is closely linked to American and Israeli Jewish interest. The above remark made to the New York Times will now be forgotten. 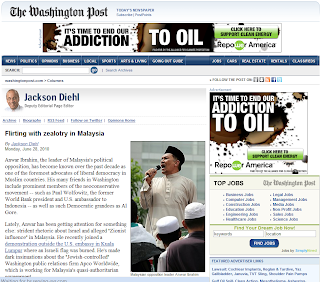 In 2010, Anwar condemned Israeli armed forces for boarding flotillas with Malaysians heading for Gaza to send aids at a rally in front of the US Embassy. 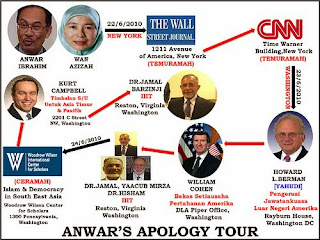 Soon after Washington post produced this article, he immediately went to New York and Washington to apologise to Jewish powerbrokers and met International media as camouflage? 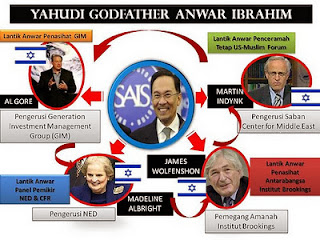 It will be difficult to convince the public of Anwar's open and close association with Brooking Institute,  National Endowment on Democrasy, and various organisations that serves American and Israeli geo-global political interest. 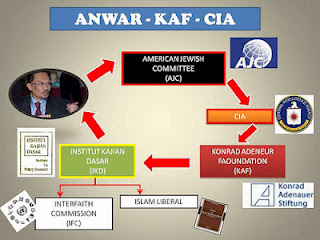 By rejecting the urgent motion to condemn US, it will be difficult to claim of Anwar's link in CIA's covert operation to adulterated Islamic belief and practises in Malaysia. A case in point is kalimah Allah issue to be used by DAP to stir up dissatisfaction in Sarawak. 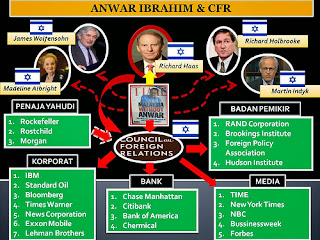 The relation between Anwar and the influential Council of Foreign Relations, which is the inextricable link between foreign relations, corporation and Israel interest. 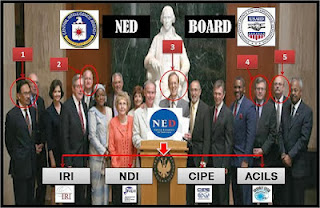 Anwar attended and was a signatory to the Annapolis Summit. This links him to National Endowment on Democrasy. The diagrams below shows interesting information on NED: 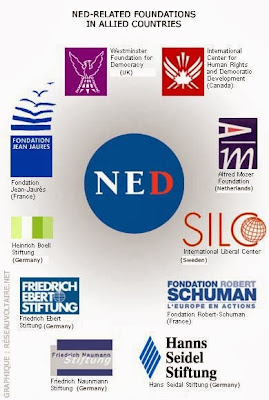 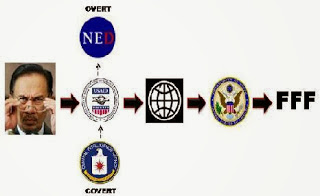 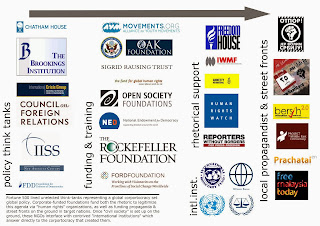 The above linkages together with George Soros' Open Society leads to Bersih. 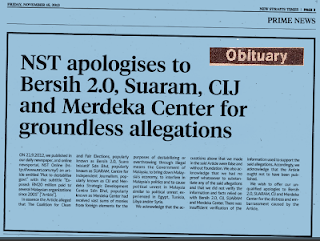 Now the picture is clearing up as to why NST held back and apologise to Bersih 2.0, Suaram, CIJ and Merdeka Center. [Read here and here]

The evening news reported Singapore has denied involvement. Will our reaction be the same ... accept the denial as good [read earlier posting on subject here]?
at 11/27/2013 10:06:00 AM

I agree with your comments. I have commented of the future of the one-street town Singapore elsewhere as follows :-
1. Singapore becomes the 53rd State of the United States. By spying for the US, Singapore has become a vassal State and only formalities need to be formalised.
2. Singapore becomes a Crown Colony again.
3. Singapore re-merge with Malaysia. This is a real possibility with the rising dissent.
4. Singapore maintains status quo with its ageing Gurkha brigades, rusting tanks, F35s, drones, AWACS, 2 submarines, corvettes, the S$2 Billion strategic water reserve, spies (now proved to be correct), secret caverns, etc. against neighbours who do not wish to conquer her.If Singapore gets rid of the military hardware and tear up the secret Immigration agreements with others and cap the population at 4 millions, she will be really the World's Best Country of all time.

I agree that someone up there chickened out. It's either Pandikar Amin Mulia or Najib.

It's just like the motion by YB Wee Choo Keong, in 2011 & 2012 regarding the Foreign Agent Registration Act or FARA.

It's a well known secret that pro-Opposition outfits such as Bersih, Malaysiakini, Suaram, etc., are foreign funded.

In the US, they have this 'Foreign Agent Registration Act', since 1967 to keep a tight leash on mischievous NGOs. This Act makes it compulsory for NGOs that receives funds from abroad, to declare their assets and cash-flows to the IRS. Their accounts, annually audited. These NGOs are registered with the NSA with their files and correspondence papers', stamped or branded as 'Foreign Agents'.
See, how long they have been doing it and how smart the American are.

Russia had just enacted the same law in 2011. That is why, there are no more demonstration and rallies, like before, because local NGOs and even their opposition are deprived of adequate funds.

China is even smarter. They don't need these type of laws, anyway. Any dissent will be dealt with tanks, like what happen in Tian...Amen, Square.

In Malaysia, Ex-YB Wee Choo Keong had already, 2 times tabled a motion for this Act in Parliament. Sadly, Najib's cabinet and its backbenches just listen to the wise YB. (who happened to be an ex-DAP politician, discontented with Daddy & Son). Speaker, Pandikar Amin Mulia even repeatedly hasten him to finish his motion quickly, due to time constraint.
What a pity we have such a lame duck government.
No body would respect a 'chicken butt' government.

Susahlah Malaysia if PM takut dengan Mat Salleh.. Previously I like the fact that our PM is a gentleman even when faced with kebiadapan from PR side. But not anymore.. Now I just think that he has not enough guts. Like Dollah Badawi with his "elegant" silence, Najib hides behind his "gentalmanly" behaviour..

What a sorry state Malaysia are in now to have two successive weak leaders after Mahathir..

The corrupted UMNO party has no ball to challenge big boys like U.S, Australia or even Singapore. All it excelled in is kuat makan rasuah and played dirty racial politics against loyal Malaysians.