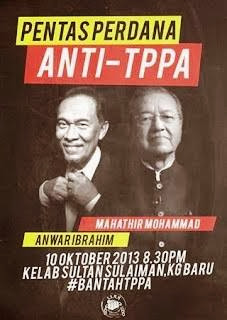 Lim Kit Siang is going about town with his punchline to pray to see Tun Dr Mahathir live to be a 100 to see the death of an idealogy he contributed to label as Mahathirism [read LKS here].

Typical propaganda style of Kit Siang to ignore exchanges with the old man but had his "chorus girls" repeat it all over the blogosphere. Before a debate could actually take place, Anwar boo boy here declare Kit Siang as winner.

It only denigrates Kit Siang as a childish coward in a children playground's quarrel.

The Unspinners yesterday [read here] described Kit Siang as short on the intellectual senses. They highlighted that Dr Mahathir have long acknowledged in 2010 that such a thing called Mahathirism have ended.

In Shamsul Akmar's latest column in NST [read in the Mole HERE], he described Mahathir as having the "courage in standing up to neo-colonialism" and it is unlike Kit Siang's choice of alternative Prime Minister to "pander to the bullying West."

If there is anything to describe Mahathirism, it was about nation building and providing both hardware and software to propel the nation into a truly "Negara Merdeka" (independent nation).

"Malaysia boleh" had inspire a generation of youth of the nation to be go-getters wanting to be see and do what is available and done abroad in this country and more.

While Kit Siang is pre-occupied with his false sense of victory, his partners in Pakatan Rakyat is emulating Mahathirism in the issue of TPPA.

It was Mahathir in his blog posting in late Julay that propelled the TPPA issue into the limelight. [Read Malaysiakini here]

In case, one has limited understanding on TPPA, perhaps these two most recently posted You-Tube videos on TPPA would give them a preview.


Note the male newcaster saying Obama administration intend to get it "pass through Congress by the end of the year using it's fast track authority to limit the lawmaker to an up or down vote."

Public Citizen Eli Wallach described TPPA not about trade. The following October 23rd posted video "on the NAFTA on steriod."


It is "a back-room deal for the 1%" and for the American corporate to replace national sovereignty. It is not just Dr Mahathir but the public Americans is also against it.

TPPA is a neo-colonialist agenda of the neo-liberals which would naturally against what Mahathirism stand for. Isn't it strange that PKR and Kit Siang's "choice of aternative Prime Minister" is openly emulating Dr Mahathir to oppose TPPA? 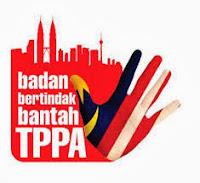 At the forefront is a coalition called BANTAH TPPA which they claimed to be non-partisan. [Read their attempt to debunk here.]

Who are they trying to kid when there is "Chegu Bard and SAMM"  making their presence in the forefront?

It's got PKR written all over.

Even the You Tube promo for their recent November 7 forum had the presence of PKR Nurul Izzah, DAP's Charles Santiago and other pro-Pakatan Rakyat personalities. [See here.]

The report on the forum could be found in Malay Mail Online [Read here].

It is all anti-neo colonialism and against neo-liberal agenda. Isn't it sacriligeous of Charles to support Mahathirism? Kit Siang should expel him.


Earlier,  BANTAH TPPA organised a rally on the verge of a scheduled but cancelled Obama visit to Malaysia on October 11th. [Read about in The Malaysian Insiders here.]

A day before, the PKR and DAP-backed BANTAH TPPA held a rally at Kelab Sultan Sulaiman, Kg Baru  and it's banners and posters had the picture of Dr Mahathir with Dato Seri Anwar Ibrahim.

Looks like not only Mahathirism not dead but Anwar Ibrahim has accepted that the so-called Mahathirism sells politically. Although, there are those that believed Anwar agree to TPPA, he is wiling to be seen side by side in banners and posters with the promoter of Mahathirism itself.

It has been proven that LKS is a loser.Ten years after TDM resigned, LKS is still a loser.

Sir, Wikileaks released the secret TPPA via http://www.tremeritus.com/2013/11/14/wikileaks-released-secret-negotiated-tpp-draft-text/ The Editor of Wikileaks states that any country which signs the TPPA becomes a slave forever. And yet our Government went through 19 rounds of secret negotiations without informing the Dewan Rakyat. The TPPA only benefits Singapore, definitely not Malaysia.

We cannot compare whoever with Tun Dr Mahathir Mohamad who is a Great Statesman of Asia being one of 7 namely, Mao Tse Tung, Soekarno, Nehru, Jinnah, Deng Hsiao Peng, Ho Chi Minh. All were Nationalists without care for money of the Lee Kuan Yew kind.