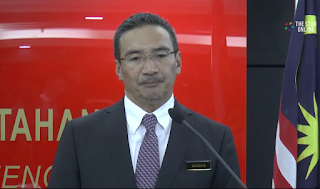 There is hardly any issue for Dato Najib to appoint Dato Hishamuddin as Minister with Special Functions in the Prime Minister’s Department.

Firstly, it is his prerogative and it is an administrative matter. More so it is a BN government internal matter.

So it is none of the goddamn business of opposition bloggers like Dato Abdul Kadir Jasin or Shabuddin Hussin, and opposition leader like Lim Kit Siang to instigate.

They forgot that they are in opposition and should be sorting out their own own internal problems!

Secondly, it is not the first time that such a position was created. As Rocky pointed out here, none of those appointed to the position rose to become Prime Minister.

Politics could be part of the concern.

In one conversation we had with a BN supporter, he was upset and willing to withdraw support for BN. The appointment was seen as setting up to appoint a successor. Unfortunately, the reasons are argued emotionally than rationally.

Political pundits are jumping the gun and stirring up emotion to speculate Dato Ahmad Zahid Hamidi will be walked over.

Thirdly, look at the position as Special Errand Minister and not Special Child to be given special treatment and extra loving. One blogger believed it relates to Sabah. There is also speculation it relates to China and Middle East.

One reason gauged from the few negative views against Hisham appointment is that it is a political nudge. In the last party election, Hisham was believed to be given various advantages, including Sultans were campaigning for him.

These days there is opposition in UMNO against retaining the bangsawan (aristocratic) character in the midst of call for Rakyat didahulukan, thus selecting successor can be seen as undemocratic. 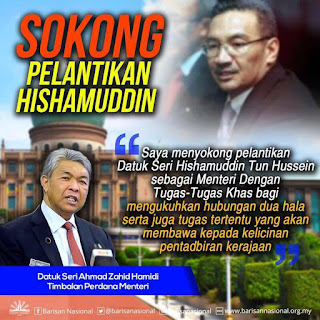 Fourth, the appointment has the support of current DPM, Dato Dr Ahmad Zahid Hamidi. Zahid's supporters and men maybe surprised but that should be the end of it. It should be seen as work-related and not politics.

No one could help the tempayan (earthen water container) from talking. More so, it is the political mulut tempayan.

The mulut tempayan have been spreading rumours that both camps are at each others' throat and baling batu sorok tangan. Speculation is rife that Hisham is going for Deputy President and it means challenging the Acting Deputy President.

Zahid's statement may not be believable to these shallow loud mouth street-side political analyst. By right, unless the man himself announce, there is a general election on hand to prepare for.

Ironically, thought the opposition to this appointment was against putting in place a successor.

Fifth, if the appointment is merely to affirm #3 in seniority after Zahid, is that wrong?

Thought it is not a bad idea. For his strength and also weakness, Hisham is considered the most senior among the Vice Presidents and has more cabinet experience than Zahid. This is an indisputable fact.

Having him as "second deputy" after Zahid, it is not a bad idea. The party and government should not be put in a difficult position like when Anwar Ibrahim was sacked by Mahathir and end up with the most unfavourable options of leaders.

Off course, be it Zahid or Hisham, both need to get party endorsement. The democratic process must not be tampered and Dato Tengku Adnan Mansor should lay off.

Sixth, it is a waste to lose Hisham. He has the experience to contribute. So the view is that it could be an endorsement of Najib for Hisham to ensure he is not lost.

Joceline here looks at it from Najib perspective to fortify his position. However, itt is a wee bit too far to assume it as Najib's move to put Hisham as successor. There is speculation that Najib is ready to quit and the presumption is to get Hisham ready.

But, should it not be to get Zahid ready?

One long shot hypothesis believed Najib and Zahid will resign and past the mantle to Hishamuddin and Khairy Jamaluddin to take the party and build up the next generation of leaders.

As said, it is a long shot and the bloke may be smoking something. Khairy still has to earn his keep  as a VP.

Seventh, if the move will destabilise UMNO and BN, one theory speculated that Najib could always announce Foreign Minister, Dato Anifah Aman as DPM II.

It is not the first time this idea is mooted. Possibly, there is agreement and consensus.

Anifah is respected locally by the public and politicians - BN and opposition, and in the international circle. It will be a welcome move to Sabahans and Sarawakians as it is an acknowledgement of Sabah and Sarawak.

If he was to run for VP, his block of votes from Sabah and another one or two state could win him a place. So it is a solution.

Off course, there will be those not keen with the idea of giving Sabah more power in UMNO. There will someone out there stretching a theory that appointing Anifah will place him as another successor for the Prime Ministership. Other aspirant seeing it tough to get the remaining one VP spot will attack this idea.

Anifah will have to agree first. He would rather spend more time in Sabah, meet his constituents, and ride his noisy Harley Davidson.

Frankly, looking at it from a political point of view is an endless discussion and has no ending. No one will agree or be fully satisfied. Take it as another responsibility for Hisham. He had two Ministries under him before.

Suggest Hisham to be more serious and diligent in his work. Insya Allah, he will be accepted and no one should be leaving BN on a wrong pre-conceived notion.

Election coming lah, PM and DPM have by now be prepared to activate and administer BN machinery. H2O is there to run the shop and trusted running mate for PM. A state man quality but lack of grassroot support. So let him take care the shop. What's the fuss with pakatan bangsat traitor to Islsm and Malay and Malaysia.