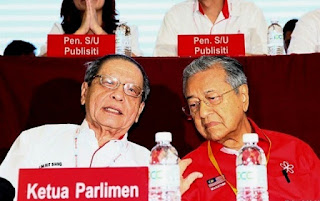 The latest Raja Petra posting, Mahathir is second-fiddle to Kit Siang, talks about Mahathir being used by Lim Kit Siang to do what he knows best - to destroy. The previous posting highlighted part of the work of his hand of destruction.

Apparently, his need to destroy 1MDB was motivated more than just IPP. Many of the privatisation he dish out to his proxies and cronies will be expiring and banks are breathing on their neck. So he needs new allies to topple Najib at all cost - UMNO, Malays, his dignity, inconsistency, U turn et al.

However, this time RPK feel he is not in the driver seat. He will be leading the Pakatan Harapan but will end up being the stooge of Lim Kit Siang and DAP. The reason Kit Siang is "shy" to tell acknowledge he does not want the position and feels Mahathir is more effective.

In other word, Kit Siang allows him to be his own self and it will favour DAP's power pursuit immensely. They have used and discarded PAS before. Now they have PAS reject to follow their command.

Hard-core staunch supporters of Mahathir will remains in-denial. They will claim DAP will succumb to Mahathir. Already they are listening to his advise to accept Malay leadership. If so, it is not seen yet.

Politics is a game of numbers and PPBM is not likely to have sufficient numbers or win states to administer. For the past two to three weeks, all have been quiet on the Kedah front. No major campaign event organised.

Coincidently, two weeks ago on April 7th, some 500 members of PPBM Rembau branch announced their resignation from the party. Branch head said it did not affected them and branch is still operational. However, there was a  tad of casualness  in his statement to accuse them of joining PKR.

Why would they join a currently Mahathir-friendly PKR? Is PPBM falling apart?

Kamaruzzaman was part of the UMNO branches movement to oust Dato Najib from inside based on Tun Dr Mahathir's orchestrated and trumped up allegation of 1MDB. He was the Executive Secretary in the first Protem Commitee and is a member in the new protem commitee.

Words are the press conference is about dissatisfaction by grassroot members against President Tan Sri Muhyiddin and Deputy President, Dato Mukhriz Mahathir. Sources within PPBM claimed both Muhyiddin and Mukhriz did not honour their promises to the grassroot.


The rebelion within the rebel-laden PPBM started out when Dato Mukhriz appointed his close confidante, Faizal @Pejo bin Dato Azumu as new head of Perak PPBM. Pejo had in turn appointed his associates to replace the original grassroot leaders that establish the branches.

This angered the grassroot leaders and Dato Hamidah Osman, the PPBM Vice President from Perak. She claimed the establishment of Perak PPBM was her effort. However, Mukhriz believed Hamidah is no popular in Perak and need be replaced. 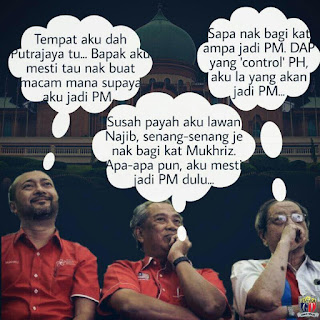 Part of the "parking" of people has to do with Mukhriz's boys plan to ensure his support and position in PPBM. This led to rumour he was competing with Muhyiddin.

As much as both tried to deny and even Mukhriz resort to lawsuit, it is not believed by political pundits.

The idea Mahathir is toppling Najib outt revenge for not giving his soon the easy passage to UMNO Vice Presidency sank in already. Mahathir may have different plans.

On the other hand, Mukhriz game could be a reaction to attempt by Muhyiddin to appoint his oys at the branches and PPBM's position.

There may be truth some iota of truth. Muhyiddin was said to tell Mahathir that he is the President thus he should be allowed to make decisions. Mahathir could advise him.

That would not be something a dictator would like to hear. 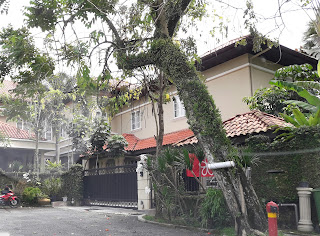 Part of the Muhyiddin disappointment with Mahathir was the PAS deal. He was in favour of the Malay and Malay based parties form a new pact, Barisan Harapan. It is Muhyiddin's ultra Malay in nature and aspiration to establish an alternative Malay-led BN.

DAP is to be left on their own.

Mukhriz also agreed to the notion. He needs PAS in Kedah to take on BN. And he has allies in PAS to work with.

While Muhyiddin and Mukhriz wants PAS, Mahathir do not. PAS must join Pakatan Harapan and be subservent. If PAS agree to join at the Muktamar, they are back to their old self.

The conference today indicate damage is done. It is heard Anas, the ring leader of PPBM Rembau will be doing a lawsuit against Muhyiddin and Mukhriz. More branches and state PPBM may close up.

The puzzle now is whether they are instigated by UMNO. Sources within PPBM claim they are still loyal to Mahathir and remain steadfast to topple Najib. They claim Muhyiddin and Mukhriz are merely putting in place a manouvre to return back to UMNO.

Their pipedream is Najib loses or BN is in a balance to need seats from other parties. Then they could bargain for Najib to quit and they can get back in. However, their plan was only to save their faction and not to deal for the rest former UMNO.

The faction against Muhyiddin and Mukhriz are unhappy with their commitment and work rate. It seemed only 92-year old Mahathir is doing all the work and attracting the crowd.

Source claim Muhyiddin intention is not to win seats for PPBM but to pull a deception game ala Sabah during Tan Sri Pairin Chief Ministership. Don't think it is not known what you did last summer.

The details are still being checked. Later perhaps. 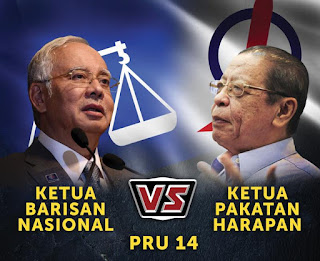 Mahathir could resolve the four time orgasm-Anina scandal but this unhappiness is disheartening. It upsets his plans. Words are he is for certain going to run at Langkawi.

Just two days after the Rembau rebelion, Dato Khairuddin Abu Hasan made an announcement that Mahathir will help to release Dato Seri Anwar Ibrahim. It explains his attempt again to be released through the courts.

It points to only one possibility and that is Mahathir may leave PPBM for Muhyiddin and Mukhriz. He will lead PH with Kit Siang as Deputy. If he wins, he will be PM temporarily and pass the position to Anwar Ibrahim.

Mahathir wanted Azmin Ali to be PM and not even Mukhriz. He is a weak leader he once confided. However, Azmin Ali is having problems in the horizon. He is also disinterested to lead Selangor and jealous of Lim Guan Eng. His treasure chest has not reach RM1 billion.

However, to get Anwar released, the Federal Judge has to declare his sodomy II case as faulty as happened with his first sodomy case. Otherwise, he will have to wait for 5 years after his probable release end of next year.

That is based on good behaviour so has he been behaving?

Does all this make sense? Maybe not, especially the part of Pakatan Harapan and likely to mean direct membership. They haven't even registered PH. It is the same ploy to register Pakatan Rakyat which they never did.

If all this does not make sense, it is because the source is from PPBM.

These idol worshipper can be the pathetic political supporters ever. They are so naive, stupid and in-denial that it is pointless to get a rational engagement with them. The PAS fanatics of the past are far more intelligent and reasonable..

Even the ones purportedly with some brain are resorting to fake news, false fact and spinning for their propaganda.

Dato Ahmad Zahid made a statement that a leader is as good as his advisers. Mahathir's good advisers are either dead or old decrepit. He has to rely on clowns likes of Kelab Che Det, Khiruddin and Anina.
at 4/19/2017 01:29:00 PM