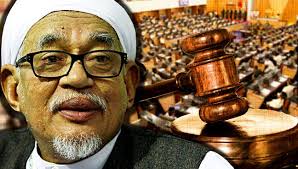 PAS President, Dato Seri Hadi Awang presented the amendment to Act 355 on syariah law (henceforth to be referred to as RUU 355) in Parliament today. After a year of waiting, the final moment finally arrived.

It is not the introduction of hudud law as twisted and spin by DAP propagandist. Despite the explanation given, opponents still insist in arguing to link the amendment with hudud.

How will the law eventually come to be received?

Many predicted it will not get passed since some component members of BN, particularly non-UMNO political parties, and East Malaysians did not agree.

It is claimed UMNO has washed their hands. UMNO leaders denied. Its only respecting BN consensus.

Nevertheless, Hadi tabled it and Dato Takiyuddin seconded. Video as below:

However, there is no debate today. It ended with a cliffhanger as one will have to wait for the next Parliament session.

Rafizi-led survey by Invoke claimed Malay youth do not agree to the RUU 355. As per anything coming out of Rafizi's mouth and keyboard in the past, it is surely a spin or outright lie.

The more likely view is majority of Muslims will not disagree or oppose to RUU 355.

It is about strengthening syariah law in line with the Quran, Hadith and practises of Prophet Muhammad. The amendment basically empower the state decide on punishment to be meted out up to a limit.

Muslims opposed to RUU 355 are in the minority. The few but vocal are the likes of Marina Mahathir and Sister in "Islam". These are Muslims subscribing to Liberal Islam, pursuing a western re-interpretation and claiming to be progressive.

To traditional Muslims, they are considered misguided, unlearned, and even deviationist.

Also opposing are Muslim politicians claiming concern for non-Muslims rights or nit picking on isolated and few RUU 355 weakness. One veteran politician claimed RUU 355 is not the true syariah law as though his lifelong struggle is for Islamic state.

The loudest critics came from PAN politicians. When Nik Aziz were alive, these former PAS politicians were vociferous in promoting and defending hudud. For political expediency, these hypocrites are still throwing the name of Nik Aziz, a strong proponent of hudud in his lifetime.

Though syariah law is only applicable to Muslims, The Star feature on RUU 355 over the weekend highlighted cases of Islamic law allegedly encroaching into non-Muslims.

This has contributed - by design or coincident, to interfaith conflicts in the past [read here and here]. It became a stumbling block or to some, an excuse for non-Muslim lawmakers to support.

Disunity among Muslim politicians made non-Muslim lawmakers that support passing of Islamic laws in the past dare not support it today. Supporting it could have negative political implication on their political prospect. Muslims votes are not consistent.

There is also amendment to Act 164 (henceforth referred to as RUU 164). It serve to address conversion of children to non-Muslim couple in which one of the spouse converted to Islam and the children converted without the consent of the non-Muslim parent.

Noticeably, most of such cases involved Indian couple. Blogger Husin Lempoyang here made a critical political parody out of this observation.

Islamic activist and elders including Hadi will naturally not agree. They called for post-phonement. Will more time bear a solution or mutually agreed resolution between Islamic clergy and non-Muslims?

Doubt so. Each side is uncompromising and only protecting their own interest.

In the meanwhile, the debate on the tabling of new law on sexual abuse to children created an unfair controversy.

Though passed unanimously by both sides in Parliament,  the debate by Dato Shabuddin, MP for Tasek Gelugor became a conversation piece in the past few days.

The Star reported him saying there is nothing wrong with the girl married off to the rapist.

Many accused The Star as spinning but Shabuddin get criticised from all sides, including his own party MP.

Did he said such?


From this snippet, he said existing law that do not allow girls below 16 from being married off by the guardian and need syariah court permission.

He may have been misquoted. Or maybe his failure to express his intention mislead the reporters.

For the Shabuddins of Malaysia, woman's role today is no more to be homemaker wife, mother and eventually grandmother.

It is likely misquoting or spinning Shabuddin's word was part of strategy in attacking RUU 355, and Islamic perspective of RUU 164 that had been the cause celebre of liberals and left leaning NGOs.

Some Muslims view it as an attack on Islam. These opponents of Islam will oppose anything Islamic thus any attempt to explain will be ignored. It is typical of DAP.

Generally, Muslims tend to promote the wrong perception of their faith.

They also failed to engage the non-Muslims or made the mistake to articulate their view by limiting it to their own perspective.

So the amendments have its political dimension.

RUU 355 could be PAS's political trump card to insist political parties courting them for permanent marriage or temporary mutaah to conform to their agenda.

It is a new strategy by the new improve PAS without the political animals in PAN and now barking dog for DAP.

There are closet UMNO politicians viewing PAS move on RUU 355 as a genuine or a ploy to unite the Malays.

With the RUU 355 debate postphoned, political pundits will be watching closely the coming PAS Muktamar.

Male Muslims can have four wives. Which marriage proposal will be accepted? Which existing marriage divorced? Will it unite the Malays?

Or will PAS opt for mutaah marriage?

Syiah allow for mutaah marriage or temporary marriage with pre-agreed divorce. Those opposed to mutaah called it as legitamising prostituition.

But tell him: "Come and pray with me, so we can enter Jannah together'

"Religious people are closed-minded, religious people are fanatical, they are intolerant, religious people can't take criticism, and they're not open to conversation. So if we get rid of religion, then we will have an open-minded society where people can think for themselves."
This accusation holds true for many religions that made their way throughout Europe. But the Islam that Allah gave His Messenger (salAllahu 'alayhi wa sallam) is the exact opposite of that. It's a religion that challenges and invites dialogue. "Bring forth your proof if you are truthful." [Surah al-Baqarah: 111]
Our Book, our Quran, doesn't just ask us to have faith. It challenges all criticisms. Collect them all together and bring them! This is what you call open-mindedness. They are saying that the solution is to get rid of religion. I am saying the solution is to bring the true religion.
- Nouman Ali Khan

"They (your wives) are your garment and you are a garment for them" (Noble Quran 2:187)