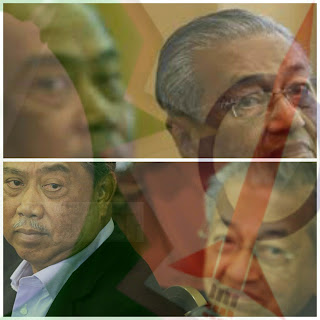 PPBM have been making claims that they have strong support from the rakyat, particularly Malays due to unhappiness on micro-level issues.

High on the list are rising cost of living, GST, students' scholarship, and civil servants budget.

The usual Chinese bashing of Mahathir era campaign will take the form of China FDI to replace DAP bashing. No more bashing of Najib for donating to Chinese schools.

One odd issue is special rights of Malays but to appease DAP, they will likely do it through Perkasa or the latest addition is Bertindak.

The issues are purely sentiment and outright propaganda. The narrative could neither be verified with statistics or survey nor sound argument.

They know Dato Najib's macro-management and policies are excellent and necessary thus difficult to debate. It will ricochet to Mahathir.

So even PPBM Supreme Council member play dumb when seek for engagement.

They rather play up sentiment to stir up emotion and it can get as petty as free range kampong chicken not returning to the coop in their evening.

One PPBM political operator once blurted, "It is not about being factual. We'll lie or fake news to stir sentiment. It is all politics."

Rahman Dahlan was not lying or trying to bodek Najib to accuse opposition of resorting to lying in their political narratives. [Read BN portal here].

Their propagandist claimed support is many and every where, but remain unseen. They will surface near the general election.

It does not stop there as there will be PAS leaders and supporters doing the same.

What is not visibly seen are likely to be lies. As Mahathir once said, it is not easy to do conspiracy involving many people. 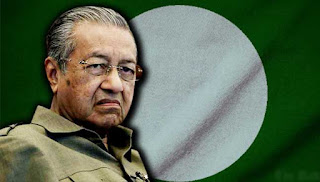 Sources claimed Muhyiddin and Mukhriz have deviated from their Chairman statement. They are working with PAS grassroot in Kedah and Johor.

They, the two M, are of the view that Pakatan Harapan are not strong. Only DAP is sure. PKR have no political machinery.

The two M felt PPBM has the machinery thus better to work with PAS at grassroot level as Hadi and top PAS leaders lull Najib into complacency.

Like PKR, the two M is thinking of using and riding on PAS dedicated and loyal machinery.

This links with the protest of PPBM leaders in Rembau and several places to leave and close branches.

It is a protest against the treatment by the two M towards Mahathir. Notice they do not criticise and the words of loyalty to Mahathir still openly expressed.

The two M treated Mahathir as a Malay Adviser and not a British adviser, whose advise should be stricly followed.

It is unbelievable for fillial son Mukriz to disobey his father.

Considering Mahathir is working hard to open the path for Mukhriz premiership and lending his influence for him inLangkawi, is it an act or for real?

It could be real because Azizul bin Dato Azumu, the person placed as new Perak Chief is his loyalist (for the time being) though he claimed was appointed by Muhyiddin.

Mahathir is keeping quiet and allowing all the critics to come out in the open. He have been quietly visiting areas to douse the fire.

However, he loves the squabbling as they will be praising and bodek-ing him. Anina did the same but was dropped.

As far as Muhyiddin, his disagreement with Mahathir is beginning to come out in the open.

He confidentially told Mahathir to just advise him but allow himself to decide and run PPBM as President. The old man just smile as a sign of disagreement. 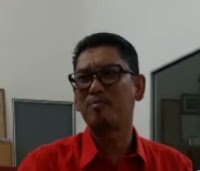 The appointment of Azizul and cronies of Muhyiddin and Mukhriz for the new heads of PPBM Divisions are being questioned.

It did not have Mahathir's endorsement. 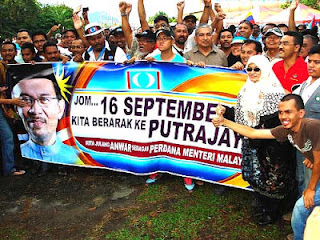 Muhyiddin do not spend as much time as Mahathir. He spend more time finetuning his Malay tsunami secret strategy. Members are questioning.

The hype of a Malay tsunami in the making could or could not happen. With membership of merely 6,000 in Kedah (or the real figure could be more), PPBM will have to work extra hard to make it happen.

Nevertheless, UMNO will have to be aware and not slackened. [Read the analysis of anonymous Malay blog The Flying Kick here].

Muhyiddin's strategy is to emulate Anwar 916 and executed in concurrence with Mukhriz.

It is to get their people become UMNO candidates and then jump ship after winning the election on UMNO platform and money.

This was a game Mahathir did to seize Sabah from PBS by getting just elected assemblymen to crossover to BN immediately after the state election.

However, it was a tic-for-tac to punish PBS for pulling out of BN to join Tengku Razaleigh-led opposition at just before an earlier General Election.

If the potential candidate - likely to be from among Muhyiddin and Mukhriz former supporters and digruntled UMNO leaders - are not selected, they will do the typical UMNO habit of protesting.

It is all pre-planned to jump before election. The psywar strategy is to create a shock and panic impact on UMNO to cripple their machinery. 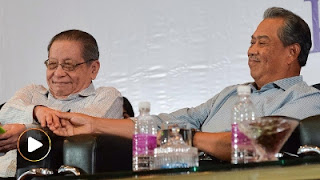 This strategy is being questioned in PPBM as it has cronyism all over. It is a political struggle devoid of any principle.

Muhyiddin has been a VIP for too long and Mukhriz is born elite. Both are over-reliance on their people but may not have the instinct on the ground condition.

They underestimated and assumed PPBM members are generally, as UMNO described, mereka yang kecewa and still UMNO in characteristics.

They may deny money is involved but it is not believable that the two M did not use money.

For crying out loud, even Mahathir is known to pay off grey marginal divisions money to the tune of RM5 million to swing support.

The grey and white makan dedak or get nothing. The price of loyalty to Mahathir.

Disgruntled segment of PPBM members that oppose such plan see it as compromising principle, devious and dishonest, and against their aspirations in joining PPBM.

This was the Perak crossover politics DAP was principally and fought vehemently against.

DAP wants PPBM because Lim Kit Siang believed Mahathir can steal UMNO members votes for PH, thus bring the downfall of BN and the rise of DAP to power.

There is no principle in DAP politics anymore since they associated themselves with Anwar Ibrahim and PAS.

Many political observers are correct to comment in the early formation of PPBM that it is the same UMNO with the same bad habit. They will repeat themselves.

Even the idea for PH that Mahathir propose is a replica of UMNO and BN. Lim Kit Siang is not interested in other brand of politics but that of DAP.

However, one has to be more optimistic. The UMNO being demanded change since 2004 is in UMNO.

While, the langau incests from the past inhibiting UMNO reform are in PPBM, PKR and even DAP and PAN. 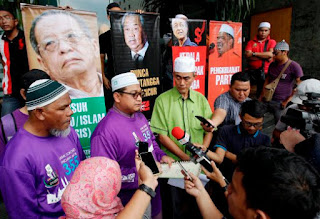 The plan to hijack will also involve PAS leaders and members. If it is known, will Muhyiddin's political backstabbing be acceptable to PAS leadership?

The current Muktamar is discussing PAS relation with PKR, which refuse to budge on their relations with DAP.

They tried to appease by having PKR Selangor to say they support RUU 355. If PAS severe ties, PKR will be the biggest loser in the next GE.

There is a long shot possibility that Selangor is up in limbo.

PAS believe it can benefit from the current posturing with PPBM, UMNO and PAS.

Their mortal enemy is PAN and DAP. But there is political convenience to trade brickbats with DAP as it strengthen PAS and DAP grassroot supports.

As far as PPBM and PAS, one do not hear strong critics against PPBM at the division and grassroot as compared to PKR.

It is only old quarrels of Mahathir with his Islam liberal inclination versus Hadi and conservative traditional Islam. 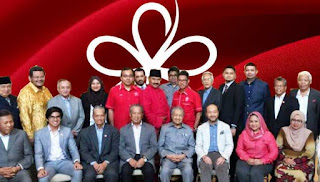 If Mahathir remain stubborn to oppose working with PAS, two possibilities can happen - Muhyiddin and cronies to join PAS or Mahathir leave PPBM to head PH.

In the later senario, Azmin or Anwar could end up as PM. Anwar stopped blaming forex loss to Mahathir.

However, Mahathir is too cunning to fall for a Taib Mahmud-style trick. The former senario more likely. One can easily guess Mukhriz's decision.

There is also the possibility that PPBM could remain as they are and remain in constant state of flux.

Other parties are unwilling to give their seats to new parties like PAN and PPBM. The motley crue will fight the battle on their own.

The winners will then do horse trading to negotiate for a coalition government.

By then the original struggle of PPBM will wane off and be lost in the politics of the time. Malaysia's failed opposition tend to over-estimate themselves.