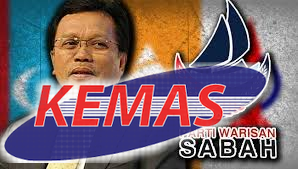 It was established in 1961 as a Division for adult education to abolish illiteracy with the underlying belief that literate parents will appreciate the need to give their children education.

With the launch of New Economic Policy in 1970, its role was expanded role beyond adult education to include children early education, skill training, community development, and professional training and development.

One of the mission is to disseminate information and provide understanding on government policies. It serve to inculcate positive attitude among the rural communities towards development and be self reliant in uplifting their economic, social and educational well being.

The Prime Minister has the progress of KEMAS in his heart. Regular reports are requested for Dato Najib.

On hind sight, Najib made a mistake to appoint Dato Shafie Apdal as Minister of KKLW in 2009 upon assuming office.

Shafie inherited a Ministry that is receiving budget priority from Government in the billions for rural infrastructure, in particular for Sabah and Sarawak.

Today, it is Dato Ismail Sabri. Is it a mistake?

Not sure but it is heard some projects fell on Shafie's people lap still inside UMNO and it could end up funding WARISAN and PPBM.

The appointment of Shafie was like throwing a corrupt and deceiving man on top of a mountain of money. The Malay has a saying to describe the appointment. "Seperti tikus jatuh ke beras".

Since it difficult to monitor and control the progress of projects deep in the interior, it is open to abuse. Officers from Putrajaya and state capital are reluctant to visit the site regularly.

Instead of having district JKR verify and certify the work progress and payment, it was done internally by KKLW agencies.

Off course, if it is ever done.

There is the likelihood that billions that was meant for rural infrastructure of roads, water, electricity and solar power projects were paid in full to contractors and suppliers, but it is only on paper.

It is not completely implemented. Pipes and cables were delivered to the sites and paid for but it was not installed.

The Sabah Watergate corruption case in court reveals money in the tens of million ringgit were diverted by corrupt officers into personal accounts and political slash fund.

Shafie may have denied involvement, but the only department from the state involved is the Water Department. The money, contract awards, project monitoring, verification, etc. were from KKLW at Putrajaya.

It is an open secret that the open tender contracts are not really open and the recipient contractors are Shafie's proxies and families!

Shafie knows time is not on his side. The long arm of the law will catch up.

He anticipated his proxies - contractors, family members, bankers, lawyers, drivers, and mistress will eventually get rounded up after general election.

Thus he has to go all out politically. Najib and BN has to be defeated to save his neck. 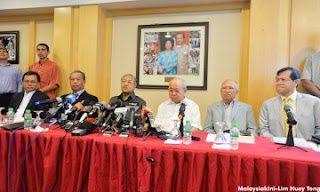 He readied agencies under KKLW, such as KEMAS for his politics.

Returning to the previous posting on "Infiltration inside PMO", it was uncovered recently that one of the names in PPBM's latest prepared list of candidates for election in one of the state is a serving KEMAS officer.

It tallies with information received that Shafie placed his people in various important and strategic positions inside KEMAS.

Quite usual for Ministers to replace such positions with their trusted people.

When he was in UMNO, they were serving him in the capacity as UMNO Vice-President. Upon he resignation, these people now serve him as WARISAN President but conveniently paid salary by government.

Shafie denied, but WARISAN is working hand-in-glove with PPBM. The Kedah side of his family via first wife side is strongly linked to PPBM.

So the people he planted in KEMAS are assisting him by making this government machinery ineffective. It serve to create dissatisfaction and distance the federal government and the leadership from the rural communities.

Funds and programs could be diverted for political purpose, which is not helping the government of the day.

More deceptive, Shafie's people are painting the wrong picture on the rural area in their report to the Prime Minister Office. For instance, they could be wrong reporting on the effectiveness of the state government.

It is believed to have happened. Najib is suspected to have reservation on the performance of one state leader.

Despite being an excellent administrator and visibly able to bring development to the state, his effort is not known to the public.

His communications team is weak and inexperienced. They could not appreciate the need to use mainstream media to keep public abreast with the work of the state Minister and his development projects throughout the state.

This is an opportunity for Shafie's infiltrator to weaken the state leadership with false report to Najib.

No wonder there are those in the corridor of power had the impression this "Bajau Laut" or Suluk leader is politically strong in Sabah. They claim he could win 16 Parliamentary seats.

Not knowing Shafie is at best only good for 6 Parliaments, it is heard certain leaders made effort to patch things up.

No doubt, money politics or sentiment can swing Sabah voters without being detected, but Shafie's name is too bad to make it happen.

More so, he is not trusted and respected by other opposition leaders for his corrupt ways.

All his years in politics, he failed to bring anything more significant than that one project to Semporna - a tukun fishery project. He bribe the voters with money to stay as MP all these years.

False report by Shafie's people in KEMAS will give the wrong impression on the performance of good rural based leaders.

Removing such leaders and worse still, replaced by hopeless and unpopular candidate will weakened BN chances against candidates from Warisan, PPBM, PAN, and PKR.

It is not far fetch that KEMAS operators will subtly highlight personalities within UMNO to push their candidacy. The strategy is for them to jump ship upon winning seats in the general election with UMNO funding.

The biggest mistake is appointing najib razak as DPM under Pak Lah and subsequently as PM. Post me any evidence that najib defended pak lah when there was a movement to oust Pak Lah. NONE?? It was Tun M's biggest mistake to force pak lah to appoint najib as his DPM.
Now .... history