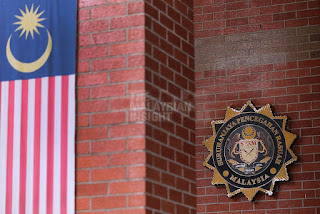 Got wind that the politician, which was formerly attached with Malacca City Council, was conveniently appointed to a Special Officer post.

Sources claimed invisible hands are trying to "block the process of law". The detail is not known yet.

But this is bad news for the effort to abolish corruption. It is something Prime Minister Dato Najib will not tolerate.

The Sun Daily report below:

MACC to charge Datuk for corruption

KUALA LUMPUR: A former special officer to the Malacca Historical City Council (MBMB) mayor is expected to be charged on Tuesday for corruption involving millions of ringgit linked to work contracts awarded by the local government.

The 56-year-old man who has a Datuk title was arrested in Johor by the Malaysian Anti-Corruption Commission (MACC) in Nov last year for investigations and was freed on bail after spending several days in remand.

MACC sources confirmed the man will be taken to court on Tuesday to face corruption charges.

Followin his arrest last year, the MACC seized and froze the suspect's assets worth over RM150 million in cash, vehicles and land titles.

The Umno politician was booted out of his position at the mayor's officer shortly after his release and was re-assigned as a BN working official recently.

What motivates this attempt to block the process of law and the fight against corruption?